Felicity Palmateer considers herself an artist. And art, inherently, is controversial when done correctly. Not that it needs to be, but, generally, good art invites dueling conversation. And Flick’s latest project, Skin Deep, a four-minute, nude surf film has certainly caught readers’ attention. Three years in the making, her short film, which The Inertia has not yet seen in its entirety, seems simple enough: Felicity Palmateer surfs naked for the length of a Rufus song. But nothing is ever as simple as it seems. We caught up with Palmateer and co-creator JJ Jenkins before they headed to the North Shore to get the story behind the project.

First off, where did the idea for Skin Deep come from?

The idea came into my head about three years ago. I came up with this concept. I mean people have surfed nude before, but maybe not to this extent. I just really wanted to show the beauty and the creativity side of it to combine my passions of surfing and art and show that connection between me and the ocean.

So how long is the actual film?

It’s four minutes long. It’s the length of one song. It’s actually a Rufus track called “No Place.” I’m really happy to be able to work with them. I’ve always loved this band. It’s an Australian band. They’re actually killing it at the moment. They just finished a massive tour in the US and now they’re over in Europe. I always visualized this project going with one of their tracks, and to actually have that is pretty amazing and special.

How long did you have actually have to surf naked to get four minutes of usable footage?

There are hours of footage. (Laughs)

The hardest thing about the project was that it’s a passion project that had five people working on it: JJ, myself, Dwayne Fetch, Rick Rifici, and Chris White. Just trying to line all of our schedules up at the same time, and then obviously to try to find somewhere that had good surf and good surf with no one out. That’s actually really hard to do. We got skunked a few times, and, obviously, there’s so much footage I hope that no one ever sees. (Laughs) Because it’s really hard to get some shots where you barely see much with a bit of modesty. I just really wanted to maintain a tasteful look where you see the beauty and creativity in it. So yeah…there’s a lot of outtakes. (laughs) 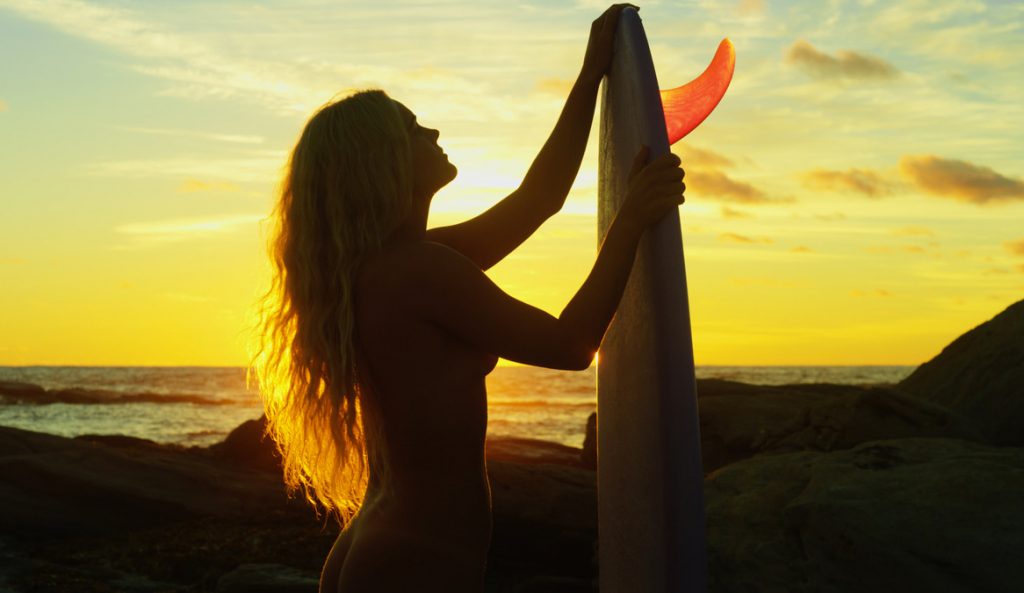 “Definitely, I have worked through my own issues, and it was a good thing for me to do, and I definitely feel more comfortable in my own skin now,” said Felicity Palmateer. Photo: Fetch Films

Well, first off, it’s always really hard to find good, uncrowded waves. Add being uncrowded enough to surf naked in daytime seems like a pretty huge challenge. Here they’d probably arrest you. Would they arrest you there?

We went to places that were pretty secluded spots.

The idea too is to have this very utopian almost ethereal feel, and that emerged as we got deeper into it. The beauty of the landscapes and to be surfing alone, just by yourself, really expressing yourself with uninhibited freedom and self-expression.

I’d have to imagine you feel really comfortable with your body to do something like this. You’ve discussed your own issues with body image before, so I’m wondering if you could speak to how this project plays into that experience.

To me, this has been purely an art project, and however people do interpret it, whether they say they’re empowered by it and inspired by it, I’m really happy about that. But for me personally, it’s really about beauty and freedom and my connection with the ocean, but, sure, I have struggled with body image, myself. Every woman does. Even guys too, you know. Especially in the industry that we’re in surfing and being judged. I do a bit of lifestyle modeling as well, and it’s hard not to compare yourself to other people on social media, and it can be so easy to do that. For me, I actually did find doing this project was kind of empowering in a way. Of course, I’m a lot more empowered. I do feel a lot more comfortable in my own skin now. Definitely, I have worked through my own issues, and definitely it was a good thing for me to do, and I definitely feel more comfortable in my own skin now.

Exactly. I actually about three weeks released a tip called Facing Fear, and it was about my experience surfing Jaws the last couple years and competing in that contest. I guess you could say that was facing fear in a different way.

What would you say to skeptics or voices that might take issue with this project?

To me, it’s an art piece. People are going to have opinions. That doesn’t mean that it’s right or wrong. I’ve said it before, but if it’s creating conversation and challenging people, then that’s the goal of art, right? There’s always going to be someone or a set of people who don’t like it, and that’s fine. I’ve said this a lot too, but if you make your coffee wrong these days, someone’s got something bad to say about it. But if it’s thought-provoking or challenging people, I’m happy with that. Once you do see the lengths we’ve gone…This wasn’t an overnight effort. It was three years in the making, once the four-minute clip does come out, the lengths we went to convey that message of beauty and freedom and self-expression.

I’d imagine that you can’t be more vulnerable than with a project like this.

So the trailer for this project went live on the site the same day that KK won Jaws, Steph won her seventh title, and there was mayhem at the Jaws Challenge. I think your trailer got nearly twice the viewership as coverage of any one of those single events. How do you feel about that?

So for now, you’re still recovering from an injury, right? Was it disappointing to sit out at Jaws?

I’ve got a lower back strain, and it’s been like that for two months, and it’s prevented me from training and preparing the way I want to. If I’m not there physically, I’m not going to be there mentally. I don’t feel ready to throw myself into that. This year, I want to compete on the QS and I also want to do the Big Wave World Tour again, and if I had gotten there and looked at the conditions the way they were, there’s a high possibility that I would re-injure myself and if was out for another three months, I’d be really annoyed with myself for not listening to my body. The decision came down to logic. I’ll come back stronger next year.

You’ll be on the North Shore this winter. What are your plans while there?

To go surf nude! No. Ha. Billabong Women’s has a house, and going to hang out on Oahu for a week and a half and that’s the plan.