Meet Fernando Aguerre, the Man Who Fought for 22 Years to Make Surfing an Olympic Sport 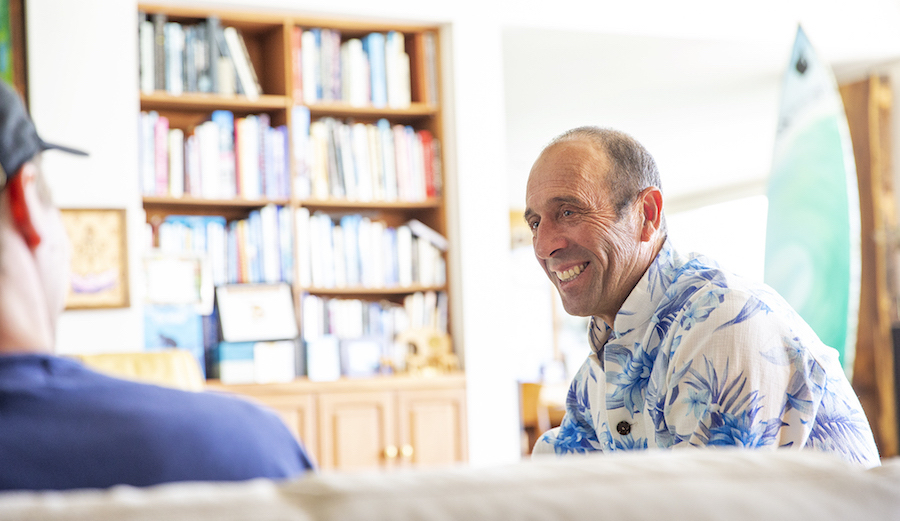 A cruel south wind froths the surf in front of Fernando Aguerre’s La Jolla beachfront home as his associate leads us through the front door, past a row of early-century wooden surfboards and framed news clippings. “This is Fernando,” she says as a man emerges from the kitchen, a long-sleeve, blue and white floral shirt adorning his short, slender frame. A thin tuft of dark hair swirls on the crown of his head as he marches toward us with floral print slip-on shoes, jeans, and an outstretched hand, a ring on nearly every finger.

“Great to meet you,” he says in a faint, gravelly voice. “I’m sorry, I just got back from Scorpion Bay,” he says pointing to his throat, his face a dark tan. Fernando gestures for me and our photographer to follow him into the kitchen. Between it and the entryway that opens to the living room, little open-space exists on the walls inside the modern coastal abode. A patchwork of surfboards, framed, signed singlets, news clippings, and other kitschy surf memorabilia adorn virtually every last corner, floor to ceiling. Interspersed are family photos, paintings, and two signed Argentina soccer jerseys – one with the name Maradona, and the other Messi. An American and an Argentine flag sit in stands on both sides of the fireplace.

Fernando is making lemon verbena tea on a center white countertop and offers me a cup as I lean against another counter with a pile of surf magazines and news articles strewn across it. He pours the tea from the kettle and directs me back to the living room. I sit on a couch and he slumps into an adjacent chair. He points out how the pillows we’re sitting on are custom embroidered. One is a map of the Hawaiian Islands with various surf spot names, the other features cartoony images of Gerry Lopez meditating. “This is Hawaii, and that’s Gerry,” Fernando laughs. 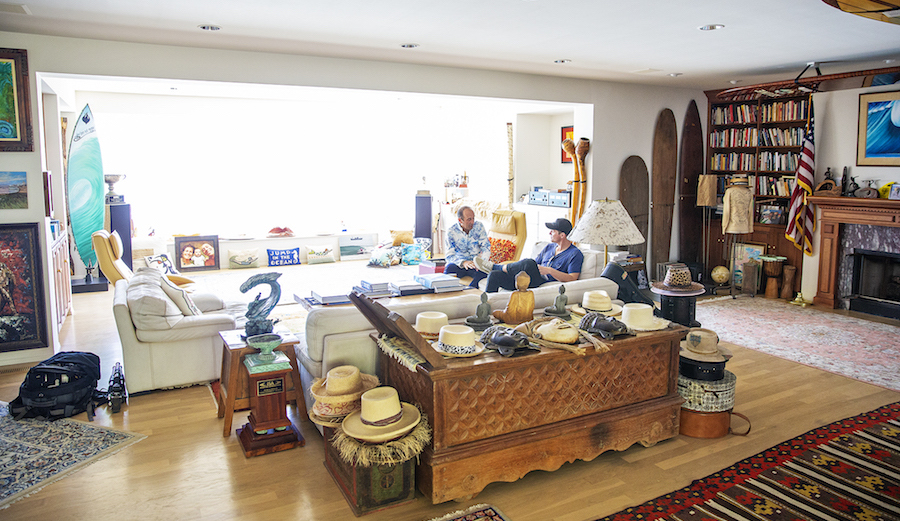 For over two decades, Fernando Aguerre has been Olympic surfing’s most vocal, often singular advocate. Back in 2016, on a bright sunny morning in Rio de Janeiro, the then-59-year-old emerged from the International Olympic Committee’s annual meeting with the world’s biggest smile. The body had officially voted to include surfing in a package of five new sports, including skateboarding, climbing, karate, and baseball, for the 2020 Games in Tokyo.

A little over a year from surfing’s Olympic debut, I ask him what it’s like knowing that soon he’ll be in Japan watching an event he worked over a third of his life to bring to fruition. He flashes a grin, sunlight pours in from the living room windows behind him. “It’s like your first date,” he says, beaming.

Aguerre – raised by his mother, an ocean swimmer, and father, who was a lawyer – grew up surfing along the shores of Argentina’s Mar del Plata in the 1970s and says he got into riding waves because he wasn’t any good at soccer. Thanks to the geographic distance from hot spots like California and Hawaii and a repressive military regime, his exposure to the broader surfing world in his formative years was limited. Still, he says, the sport and music saved his life.

I think in many ways we as surfers have been isolated, selfish people.

In 1977, the government of Argentina effectively banned surfing and in response, he formed the Argentine Surf Association and successfully lobbied to overturn the ban. The effort relied on a three-pronged approach: organizing surf contests – which were impromptu gatherings where Aguerre would pull up in a friend’s pick-up with his DJ equipment and play music while surfers competed – television spots, and radio air time. For the latter, Aguerre hosted a program on the radio and made a habit of playing only from the list of songs banned by the government to attract listeners.

“What happened to me in Argentina is I learned to be an organizer,” Aguerre says.

After he finished law school in the mid-eighties, Aguerre and his brother Santiago relocated to California, ultimately launching Reef sandals in San Diego, which quickly rose to prominence thanks in no small part to now infamous marketing campaigns featuring thong bikini-clad models.

In 1994, while still running Reef with his brother, Aguerre was elected to the top post at the International Surfing Association and quickly instituted major shifts in the organization’s modus operandi (he represented Argentina at the 1992 ISA Games in longboard). Not least of which was getting the IOC to recognize the ISA as an international federation in 1995, laying the groundwork for the Olympic inclusion push.

“It was another place to organize,” he tells me. “I wrote to the president of the International Olympic Committee, and became the first surfer to go to Switzerland to meet with him.”

A 1996 lobbying effort to get surfing included in the 2000 Olympic Games in Sydney ultimately fell flat. But, Aguerre pressed on, and in the early 2000s – after selling Reef to VF Corporation in 2005 – he ramped up the pressure, ultimately attending the XIII Olympic Congress in Denmark in 2009.

“Millions of youngsters around the world continue to be puzzled by the absence of surf and skateboarding, following the successful introduction of snowboarding in 1998 at the Nagano Winter Games,” blogged Aguerre from his trip to Copenhagen.

But it wasn’t until four years later the idea began to gain traction.

“For me the first indicator that there might be waves on the horizon was when I wrote to candidate Thomas Bach in mid-2013, talking about youth and action sports… and he responded positively,” Aguerre told Olympic.org. “Then he got elected and started talking about Agenda 2020 and it was approved and then I realized this looked like real waves.”

Tune in to watch the IOC take the final vote on whether to include Surfing in the Tokyo 2020 Olympic Games at 3pm local time in Brazil via Olympic.org! ISA President @fernandoaguerre is in attendance, hoping to fulfill the Olympic dream that the Duke started over a century ago. #Surfing #Olympics #SurfsUp

In the years since the announcement, Aguerre’s worked tirelessly to iron out a brand new qualification scheme that adequately threads the needle between broad geographic representation and including the best talent.

He tells me that not unlike during the twenty years he spent “paddling for the Olympic wave” he often wakes up in the morning with the sinking feeling something needs to be done to continue the Olympic push. He then quickly comes to, and a wave of relief washes over him.

Aguerre, though, is the first to admit there’s still plenty more work to be done before Tokyo. “There is no second first impression,” he says. 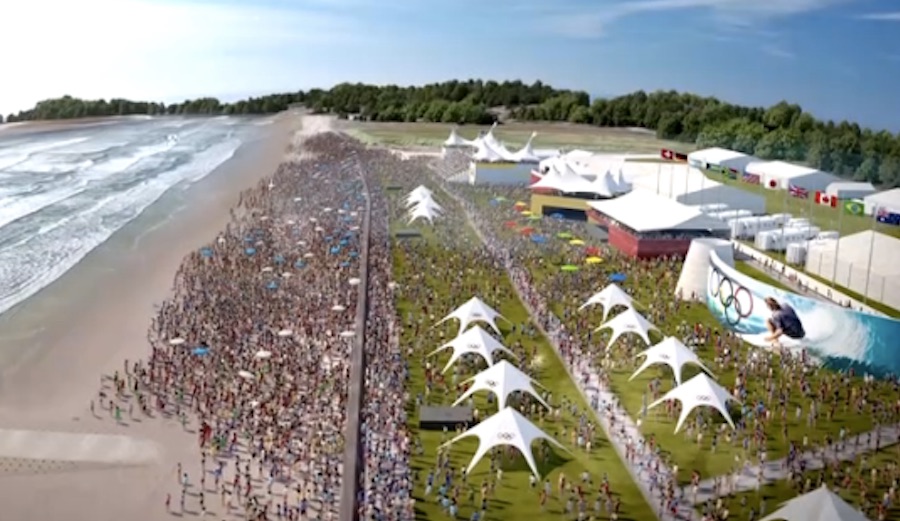 Surfing will take place on the beach with music and sponsor showcases. This rendering shows what the scene at Tokyo might look like. Photo: Tokyo 2020

Since surfing’s Olympic inclusion, and indeed even well-before, critics have been vocal in their opposition. “The thought of surfing in the Olympics brings a familiar dab of bile to my throat,” Matt Warshaw told SURFER magazine several years ago. In a 2015 op-ed for the New York Times, William Finnegan wrote that when he first heard about surfing being considered for the Tokyo Games, he thought, “The Calvinists couldn’t finish off surfing, but maybe the Olympics can.”

Aguerre bristles at the idea that the Olympics will make surf spots more crowded or ruin the sport, saying when he arrived in California 35 years ago all the local spots were already crowded.

“The naysayers will say that this is gonna make surfing uncool,” he says. “And I say, absolutely incorrect. I don’t surf because it’s cool and (so) that other people see that I surf. I surf because it is a personal experience that cannot be repeated… for me, I want to spread that feeling. I think in many ways we as surfers have been isolated, selfish people.”

Unlike his detractors, Aguerre believes spreading surfing to the furthest corners of the globe can have a positive impact on its people and the planet. He tells me about a community of female surfers thriving in Iran. He mentions landlocked nations taking to stand-up paddling. And ISA scholarships being awarded to young surfers so they can get an education. This, he believes, is an extension of Duke Kahanamoku’s dream.

As Aguerre puts it, surfing has the power to bring an entirely new idea to the Olympics – not just a competition but a festival with exhibitions of different surfing disciplines, primers on the history of the sport, lessons, and environmentalism.

From the beginning, Aguerre says the contests he organized as a youth in Argentina were more about the lifestyle, the community, and the sun than the competitive event itself. Come Tokyo, his vision is much the same, if not on a much larger scale.

“We’re opening an embassy,” he says. “A surfing embassy.”