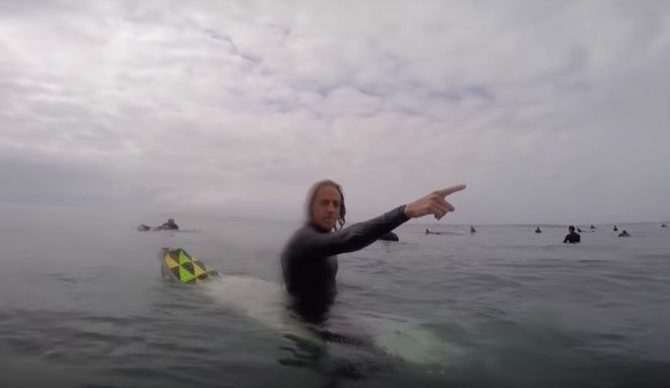 Michigan-born Aaron Hogan, 34, was fined for setting up an illegal tent at Lowers to claim “local status.”

Recently, I went out to dinner with a group of Canadians. Being mostly snow-dwelling folk, they had many questions about surfing.

“There are so many guys out there,” one woman said. “What do you do if more than one of you catches the same wave?”

“Well,” I responded, “Sometimes it comes to blows.”

She stared at me in stunned disbelief. “But surfers are supposed to be laid back…”

The next day, everyone’s favorite paragon of laid-backness, Sunny Garcia, got in one of his annual, knockdown, drag-out, hold-underwater, and chase-up-the-beach fiascos. In November, he had words with Tom Curren during a legends heat at Sunset Beach. Curren later said they’re “cool.” Sunny’s just “very passionate and very intense.” In 2007, he chased Neco Padaratz out of the water at Pipeline; if you Google “Sunny Garcia Fight” the question is not “where?” or “when?” but “which?”

Garcia is the classic example of one of those guys the surf media always describes as having a “big heart.”  Ken Bradshaw, Kala Alexander, Koby Abberton, Johnny Boy Gomes (to name a few) might fall under the same category. If you only know them from surf magazines you’d swear they were endowed with oversize arteries. What the hell does that mean, anyway? A big heart? These guys enjoy holding babies and kicking the living shit out of people?

The category isn’t limited to semi-famous guys, either. There are angry, old men of the sea at nearly every surf spot in the world who fit the mold. They are rarely complete thugs – just stern, tough men who are prouder than kings, twice as insecure, and surly as hell. They believe in a strict code of conduct that doesn’t always apply (to them), and they sit atop this rigid hierarchy. By contrast, you, a pauper in this institution, must follow it piously. The glue that holds the whole thing together is violence, or the threat thereof, which can often be just as effective.

The most interesting byproduct of this phenomenon is that they enjoy a certain cachet in our culture. Imagine one fisherman kicking another out of a certain spot because he “didn’t like his attitude” and then threatening to hit him or break his rod. Better yet, imagine it happening while you throw a frisbee in the park or play Monopoly in your living room.

The truth is, as the thousands of message board comments can attest, violence and violent men in particular fascinate us. Always have.  Surfers may obsessively debate whether violence is right or wrong, but it remains an immutable constant in any sport without an arbiter. The lineup is as close to pure Hobbesian anarchy as exists in the modern world, and also one of the few places where “average” men are measured solely by their physical ability. In this world where a man is measured by the strength of his shoulders, the only true sin is weakness, and a closed fist is the ultimate currency.

Garcia and his particular brand of sleeper hold aloha are the logical products of a system and a worldview based entirely on extreme physicality. He is an amazing wave rider and a fearsome fighter, but where do we draw the line? Is it okay to push someone who has dropped in on you?  Is it okay to intimidate someone with threats of violence if you think he is disrespecting the pecking order at your local spot?

I surfed Burleigh today for the first time in my life. Before I paddled out, I surveyed the lineup and picked out the weakest surfers, then went out and took waves off of them all afternoon. I didn’t elbow drop anyone, but by any land-bound standards, my behavior was pretty reprehensible. I singled out those less able than me and exploited their weaknesses for my own gain. That’s just business as usual during a surf session, which can be an attractive proposition at times. There is something wonderfully unambiguous about riding a wave, or getting tubed, or for that matter, getting punched in the face.

The downfall of Garcia, and indeed all “big-hearted” men, is not that they are capable of violence, because I think most men are (and certainly many women, too). It’s that violence and intimidation come to define them. It’s easy to forget Garcia’s smashing forehand carves or his world title when we see him holding some poor kid under water. He and his ilk are too angry, too insecure, and maybe just too stupid to see how much people would love them if they didn’t act like bullies. They can take the waves that they want, beat their way through lineups, and even earn the grudging respect of their peers, but like all playground bullies, they end up alone in a world of “lesser” men who despise them for being nothing more than petty demagogues.