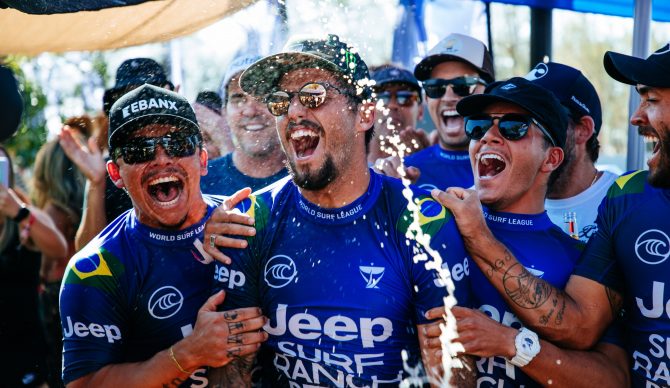 After a grueling three days in a Central Valley heatwave, Filipe Toledo and Johanne Defay won the 2021 Jeep Surf Ranch Pro presented by Adobe. And to earn their trophies, each had to take down the World Number 1 on their respective tours in Sunday’s finals.

In the women’s final, Defay and Moore traded blows wave for wave. On one of her waves in the final, Defay fell after coming out of a barrel and swinging for one last turn. Luckily her opening left 8.7 proved to be strong enough to give her a chance for the win on her last right. She added a 7.93 on that last wave, enough to edge Moore by .40 in their combined high scores.

“Every time a wave comes you know it’s a 10. There are all the opportunities you need to make your scores. And if you don’t then it’s on your mind,” Defay told The Inertia after her win. “I felt a little bit of frustration because I hadn’t fallen this whole event,” she admitted. “I had this second of hesitation knowing I could put one more turn in. And it was just too late.”

Defay did note that the absence of fans in Lemoore changed the mental aspect of an otherwise exhausting contest.

“I just felt like I had to surf like any other training day. It actually helped that there wasn’t much of a crowd here because it’s just like training days.”

Toledo agreed that competing at the Surf Ranch on a manmade wave has an undeniable impact on strategy and preparation.

“This competition by itself is a lot of pressure,” he told The Inertia. “There’s not that strategy going in the water of hassling somebody, getting priority and putting them on bad waves. Here it’s just a mental game. You have your line in your head, you put your turns together however you visualize everything’s gonna work.”

In fact, Toledo added that he came to the final against Medina with “three lines” prepared for his wave, each based on what scores he might need and what he could risk on a given wave to get them.

“The third (line), I never surfed it,” he said. “I didn’t need it to use and I knew I could get a big score on the lines I already had.”

Sure enough, his final matchup with Medina came down to the very last wave. Needing to pick up ground after Toledo scored a 9.67 on his final right of the competition, Medina threw the kitchen sink at his own final left-hand wave. When he fell about halfway down the pool, a crew of Brazilian CT athletes erupted in celebration for Toledo. After they were done hugging and high-fiving the day’s winner, they then ran the length of the wave pool to congratulate Medina, who had decided to walk back for a moment of solitude to reflect on his performance.

Aside from the big wins for Toledo and Defay, Medina and Moore made headlines this weekend by securing their spots in September’s Rip Curl WSL Finals. With two of the men’s top five sitting out in Lemoore (Jordy Smith and John John Florence), Gabriel Medina secured a spot among the five finalists on Saturday afternoon. Griffin Colapinto and Kanoa Igarashi both leapfrogged Florence and Smith in the rankings, with Colapinto now holding the World no. 5 position with three more contests to go.

On the women’s side, four-time champion Carissa Moore locked up her own spot for September’s Finals Day with an 8.50 on her second left of Sunday’s semifinal. With two months to go before that world title shot, Moore says she’ll be taking each new heat going forward, “moment by moment.”

“It’s great to be qualified but ultimately you want to be first or second going into that Finals Day to have a little bit more of an advantage. There’s work to be done, for sure,” Moore told The Inertia.

Meanwhile, the win for Defay moved her into the second spot on the women’s World Tour leaderboard.