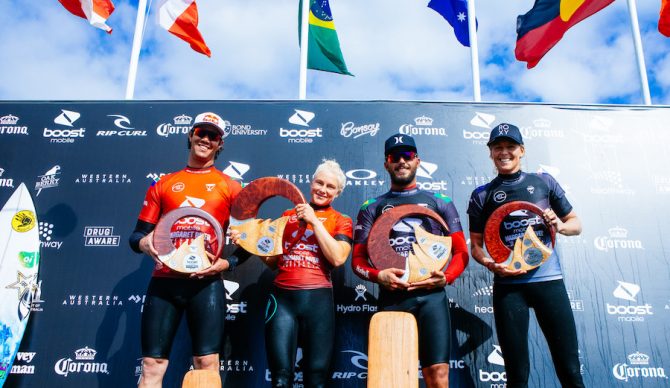 Conditions were beautiful but tricky for an interesting final round at the Margaret River Pro this weekend following four days on hold as officials waited for the wind and waves to align.

Both the men and the women’s side saw some of the biggest names notably absent on finals day. After a dominating start to the event, John John Florence withdrew before his quarterfinals start citing a knee injury that he wants to take care of as we head into the Olympic debut of surfing where he hopes to represent Team USA, and Caroline Marks was knocked out in the Round of 16 by Bronte Macaulay (both massive losses for my WSL Fantasy team). 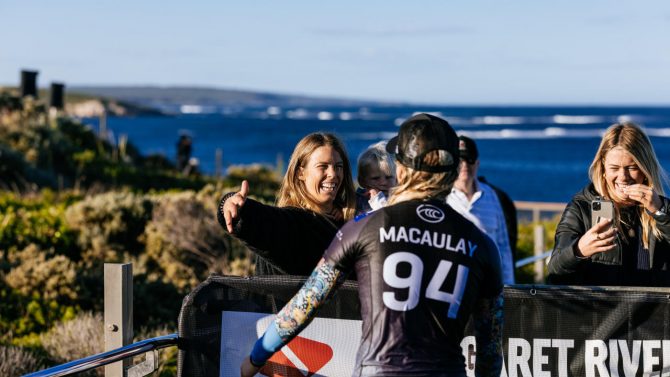 Bronte Macaulay put on a strong performance at Margaret River despite the recent passing of her brother, Jack. Photo: WSL/Matt Dunbar

Carissa Moore, defending champ and World Number 1 was knocked out in the semis by Steph Gilmore, who, after a slow start to the heat with Carissa in the lead, dropped a 7.67 with five minutes left to take the win. Steph went on to face Tatiana Weston-Webb in the finals after Tati defeated Bronte Macaulay. Bronte was hailed widely for her inspirational grit. She was surfing after the tragic death of her younger brother, Jack Macaulay, over the weekend. She started the heat strong with a solid 6.00 to Weston-Webb’s five-point opening ride, but was unable to follow it up, and Tati dropped a 7.17 in the final minute.

“This one’s for the Macaulays, they are such an amazing family and the West is all about their love. I know it’s been a super hard day for them,” Tati said in her post-heat interview.

Tati’s best performance though was in the finals where she dropped an early 8.50 against Gilmore. And she didn’t stop there with a 7.73 to back the first wave. Despite a late 8.17 for Gilmore, she just couldn’t catch Tati. 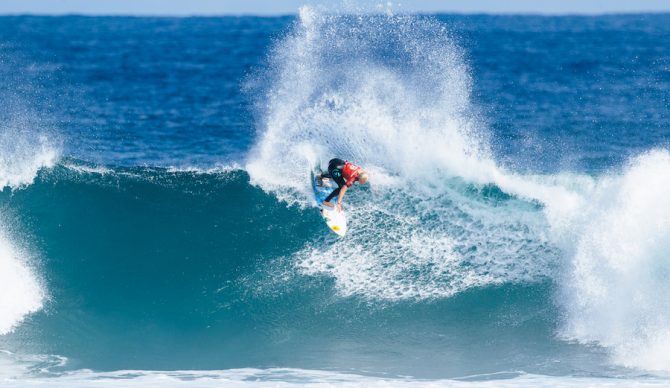 As for Filipe Toledo’s win on the men’s side, Filipe didn’t really hit the gas until late in his semifinal against South African rookie Matt McGillivray, but once he did there was no stopping. The quarterfinals saw him up against fellow Brazilian Italo Ferreira, a bit of an inconsistent heat with long waits for waves, but when the waves arrived the two Brazilian showmen each stepped up with big scores, Felipe just inching out over Italo.

In his heat against Italo, the next against Matt and his final against Jordy, Filipe’s rail game was on point, with massive carving cutbacks and big finishes, demonstrating that the high-powered nature of his rail surfing is right up there with his much-discussed high-performance air game. Guest Kelly Slater, Richie Lovett and Ronnie Blakey created an entire segment on the broadcast about the work he’s put in. “Something we’re starting to really pick up on with Toledo is an increased power in his surfing,” said Ronnie. “There was always a crack to his forehand hit, and these days it’s kind of a thump.” Slater agreed. 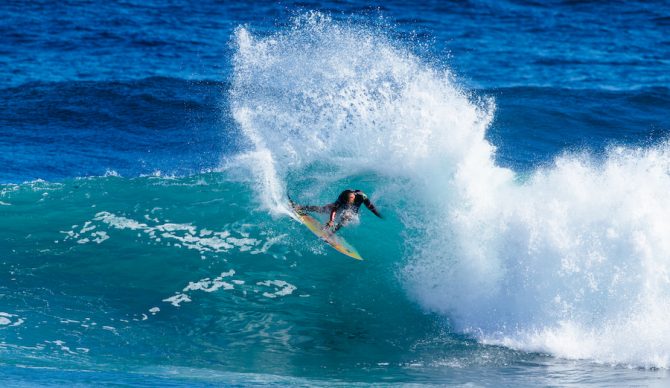 His competitor in the final, Jordy Smith, came out of the gate strong, dropping an 8.00 on his second wave, but Toledo’s second attempt, a solid 6.67, wasn’t in his top two. In fact, it wasn’t even among his top three waves as he kept gaining momentum throughout the heat with explosive rail-to-rail surfing and impeccable timing on the wave. Jordy’s surfing was smooth and fluid, but lacked the explosiveness that Toledo brought to the table in the final.

Next stop on tour will be the Rip Curl Rottnest Search at Strickland Bay, a high-performance left on Rottnest Island off the Australian coast near Perth. Rottnest is a natural reserve and home to the Quokka, a small marsupial that thrives on the island due to few natural predators, especially in comparison to the Australian mainland. They’ll be plenty of competition for the waves soon enough as the tour descends on this quiet corner of the world.