For Good or Bad, the Olympics and Wave Pools Will Change Surfing Forever 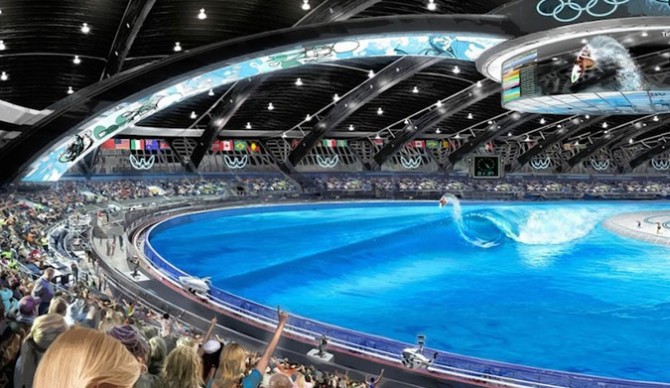 A friend recently quipped that surfing wasn’t a real sport because “the surfers are just out in the water having a bit of fun.” By his own admission, he knew nothing about surfing. He didn’t understand the nuances of the judging criteria, the priority system or the degree of difficulty in an air reverse versus a floater. It all just looked like a bit of fun in the sun.

He does have a point there; it is. In fact I’d argue that surfing is the most fun of all sports. I’ve given others sports a go – football, basketball, cricket, skateboarding and swimming to be exact. But there is something fundamentally different about surfing that separates it from all those sports. It offers spontaneous elation. And as the saying goes, “only a surfer knows the feeling.” That feeling translates from the grom at your local beach all the way up to the top professionals of our sport.

Think back to Taj Burrow’s last heat, a nail biter loss. It was the same kind of loss that would reduce grown men to tears on a football field, but instead it was described by Taj as “one of the best heats of my life! The waves were so sick. I feel like I’ve won the world title. I’m just so happy.” Can you seriously imagine any other sport where losing would be this fun? Taj had a ball in that final heat because he was getting shacked off his head in an empty lineup for 35 minutes. How often have you heard pro surfers say how incredible it is to be “catching amazing waves with only one other guy in the lineup?”

This kind of elation and spontaneous enjoyment just doesn’t happen in other sports. We can look at the Tour De France for example. It is one grueling, lactic acid filled nightmare. Sure, cyclists are jacked up on endorphins (among other chemicals it seems), but they are also in pain and comp[letely exhausted. I don’t think I’ve even seen one of those guys smile until the race is over. The same can be said for running or swimming or even tennis. In tennis you might feel good after hitting a great shot but by the bottom of the 5th set, seven hours later, you’d be wishing for it all to be over so you can collect your check and get to the banquet.

To be fair I should really be comparing surfing to other sports in the “extreme sports” category. But even then you’ll find a certain level of monotony; a slew of snowboarders on the same groomed halfpipe, the skateboarders with their street course run, the freestyle motorcyclist jumping the same piece of dirt over and over again. The playing field is set and there are no real surprises.

If doing the same thing over and over with no real surprise is what makes something a real sport then surfing is about to get very real indeed. Surfing has just been accepted into the 2020 Olympics, and officials say competition will be taking place in the ocean when the Games come to Tokyo. Paris and Los Angeles are frontrunners for the 2024 Olympics, which could also allow for competition in the ocean, but Fernando Aguerre, President of the International Surfing Association says “who knows” when it comes to the inevitable conversation about competing in wave pools.

“You know, between Kelly Slater and Wave Garden and some others that might come, in a couple years, we may three or four really good waves,” Aguerre said leading up to this week’s announcement that surfing is now an Olympic sport. “You know, manmade waves, where actually the ISA or the WSL run one of their events, and suddenly we say, ‘Wow, great.’ We’re not scoring your lack of getting bigger waves we’re scoring your performance on waves. So it will change how the competition will be held and we may be able to have a little additional objectivity in certain criteria.

Aguerre is the man who led the charge for getting surfing into the Olympics, and even by the picture he paints the breeding of wave pools all over the globe could bring surfing kicking and screaming into the world of real sports at the cost of spontaneity.

While Kelly’s wave may look super fun, it’s the surfing equivalent of a halfpipe. It features the same predictable line waiting to be raced over and over again. What the pros do in that pool will be a whole new sport. We’ll likely even come up with a whole new vocabulary for what goes on in a wave pool, maybe calling it inland-surfing or lake-surfing. Perhaps it will become a favorite in the Olympics and watched by billions of people around the world. It remains to be seen, but what I do know is we won’t see people claiming a heat loss as one of the best surfs of their life. No, wave pools will turn surfing into a real sport. They’ll turn it into a sport with a level playing field and an easily digestible judging system. They’ll turn it into a sport with a designated number of waves, breaking in a designated spot with a designated sponsorship banner in the background.

I’m not against this new sport. It will probably be a lot of fun, but it certainly won’t be surfing the way we’ve come to love it. I can see the renegade salt-surfers of the future now, bobbing away in the unpredictable ocean with a wry smirk on their faces, knowing that the sport of surfing remains theirs and theirs alone.