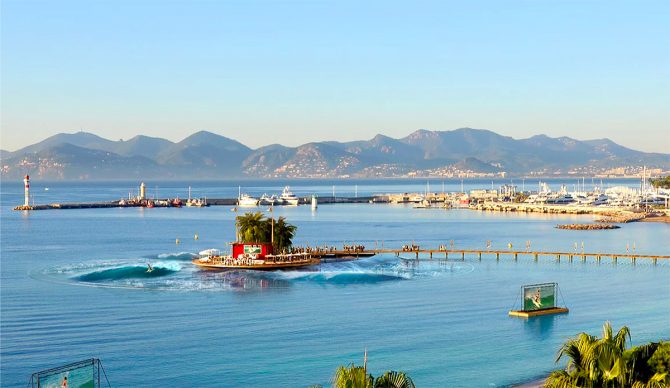 To this point, the only thing surfers are really interested in when it comes to their artificial waves is their quality. If it’s rippable, if it’s fast, if it barrels, and if it someday actually does gift us the occasional reprieve from crowds, we’re going to be intrigued. Some of us may even fork out good money for an hour’s worth of such a luxury.

Of course, if you’ve never surfed before or worse, live nowhere near the ocean (poor thing), the boom of wavepool developments all over the world promises the chance to ride waves without needing the sea. An announcement by the French themepark Futuroscope this month introduced two potential firsts to the industry: a portable wave machine tech that can be installed into existing natural bodies of water like a lake and create new environmentally-friendly marine ecosystems in the process. Imagine dropping an artificial atoll/reef into your pool, lake, or even in the actual ocean, with waves spinning out of and around it. That’s more or less how the Okahina Wave Project technology is described, which Futuroscope says they’ll be installing in their science-themed park in 2020.

Don’t bother digging for new footage of the wave, though. None exists. There are only artist renderings of what a potential venue might look like with one of their atolls plopped into a body of water. And Okahina’s website doesn’t explain how it all works, they’re simply telling us what it does, pointing out that the tech is currently being tested at an undisclosed site in the Aquitaine region of Southwest France. Nonetheless, they have their first buyer in the French theme park.

So what’s the sell? Waves from two feet to six feet that barrel for 30 seconds and longer, created as quickly as every 15 seconds.