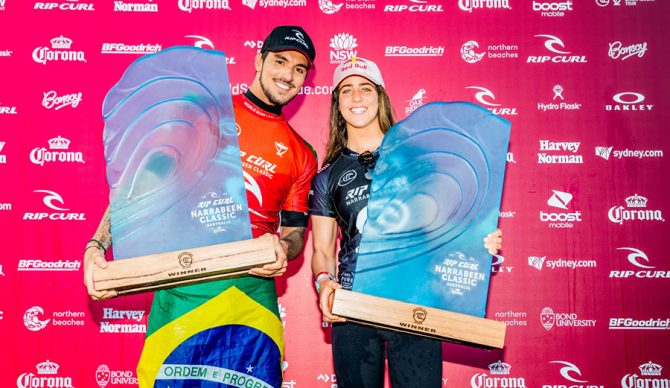 Gabriel Medina and Caroline Marks now sit one and two in the rankings, respectively. Photo: WSL

Gabriel Medina looked like a machine. Caroline Marks showed us she has a formidable forehand attack. Both looked like world title contenders as they won the Rip Curl Narrabeen Classic yesterday in northern Sydney.

Medina made every maneuver he attempted look video game-like: vertical hits, cutback wraps while blowing fins out, airs on impossible sections, even hassling Frederico Morais in the semis  – it all looked relatively simple. The Brazilian recently made big changes in his life that seem to be working wonders.

With Narrabeen in classic form, creating nostalgia and calls to keep the locale on the WSL schedule, Medina looked lighter and willing to give the crowd and his fellow competitors more of himself. From relaxed post-heat interviews to handshakes and embraces with other surfers, the man just seemed, well, happier. It might have been his recent coaching change or the fact that his wife was there to support him. Whatever it was, he looked absolutely unbeatable throughout with his third straight finals appearance while taking over the ratings lead from Italo Ferreira.

Conner Coffin, coming off a controversial heat with Italo, was comboed early in the finals. On his first wave, Medina turned an average left into a three-turn maneuver wave punctuated with a clean air that landed in the nine-point range. He followed that with a right under priority and another absolutely impossible air where he lofted into an oncoming closeout barrel, landing on the lip line and converting a perfect make where most humans would be hoping not to get hurt. Coffin needed more than an 18 to win the heat, which by that point, was essentially over.

Marks, on the other hand, faced off with Tatiana Weston-Webb and nabbed her third CT win by doing something we don’t often see her do: go left. By the way, it was the first final featuring two goofy-footed surfers in 118 women’s events, according to WSL stats. Caroline certainly showed her versatility, unleashing several critical turns on a frontside she said she has been working extremely hard to improve. The win moves Marks into second on the ratings behind Carissa Moore, who Tatiana bumped in the semis. Tatiana meanwhile, moved up to third.

All in all, the World Surf League couldn’t have been luckier with the conditions. Or the crowd, which came out in full force to see professional surfing again after a year away. Now the tour heads west, where we’ll hopefully see North Point and the Box showcased at Margaret River.