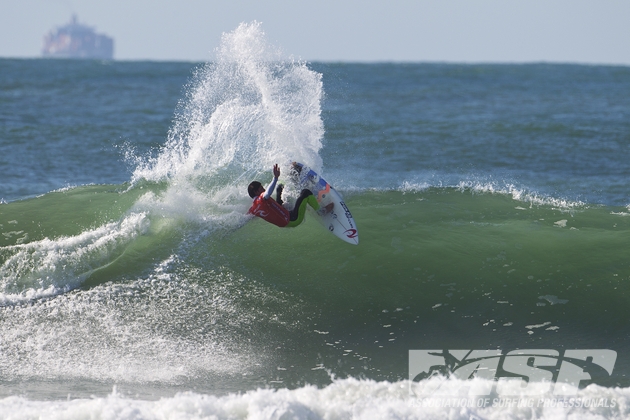 Ladies and gentleman, brothers and sisters, I have seen the future of professional surfing and its name shall be called Gabriel Medina.  Not until you have seen this electric, 17-year-old goofyfoot in person does his talent sink in.  Webcasts reveal a quick, small and limber acrobat, flipping his tail all over the place, but surely too light, too young to be a threat in serious surf against serious surfers.  I am here to tell you that Senhor Medina is the real deal.  In overhead, absolutely thumping Ocean Beach surf, he annihilated first Taylor Knox in the semifinals then Joel Parkinson in the final of the Rip Curl Search.  Neither heat was close.  Nobody in the media tent could quite believe how thoroughly dominating Medina’s heat wins were.  Time after time, set after set, the young charger careened over the ledge and swung huge arching hacks under anvil heavy lips, following heavy carves with fin free blasts and weightless airs…and it seemed impossible for him to fall.  Rights, lefts, – didn’t matter.  Not only did he outsurf Taylor and Joel, he caught more and better waves, all over the wildly shifting and incredibly difficult contest zone.

In the semifinal Medina opened with a 6.83, worrying the Knox supporters right from the opening horn.  After Taylor clawed back into the heat, Medina crushed the 40-year-old veteran with two 8s – both involved tail-free snaps followed by critical airs.  The final was even more anticlimactic.  Minutes into the last heat, the lithe Brazilian had a 7.5 and a 9.0 to Parko’s 1.0.  I was sitting with some ASP biggies in both the semis and the finals, and we were all left gasping at Medina’s performance; he was surfing so hard and so aggressively. And he just wouldn’t fall.

Medina also beat Wilko and Slater in closer heats today, though Slater seemed uninterested in competing.  Kelly surfed far to the south end of the contest area, leaving Gabriel alone for most of their heat, while Wilko put up a couple good scores, but caught only three scoring waves to Medina’s six.

Today was Medina’s day, and it looks for all the world like this will be Medina’s World Tour to lose for years to come.  He’s the embodiment of a postmodern, high-risk for a high-reward, fluidity be damned, raised on rapid-fire surf video clips where the maneuver is all that matters, cutting-edge pro.  Two event wins in four tries after the new mid-year call up is impossibly impressive.  He could use more seasoning in pointbreak surf to help smooth out the time spent between big hacks and orbital airs; as it is it seems that he is uninterested in the space between turns.  If he starts linking those ridiculous moves together, he’s a 21st century Rob Machado, with a more varied bag of tricks.  Scary.