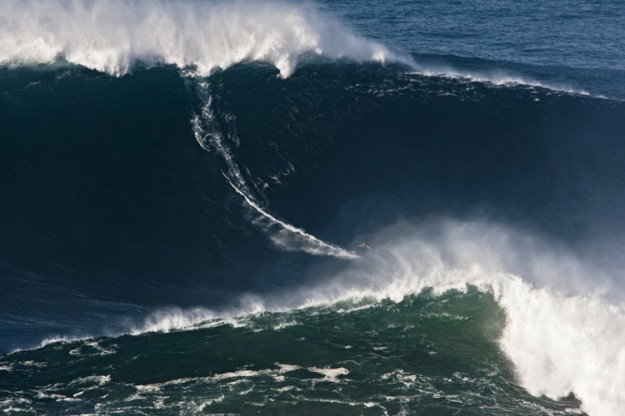 "That wave was a very unique, special wave and everything came together," said Garrett McNamara. "If on the drop I’d made any wrong moves it would have been really bad; all those chops were really tough to navigate." Photo: praiadonorte.com.pt

Garrett McNamara is still buzzing from the alleged 90-foot wave he caught last week, a ride that captured the surf and non-surf world’s attention. Gmac’s wave was the result of a long term exploration of the coastline near Nazaré Portugal, just inshore of the Nazaré Canyon, a deepwater gash in the seafloor that focuses swell energy into its sandbanks.  McNamara’s surfing career has been nothing, if not spotted with superlatives. He’s surfed waves caused by crumbling glaciers in Alaska, he’s nearly crushed his bones at Teahupoo, and he’s survived nauseating wipeouts at the seemingly unsurfable Shark Park. Right now, McNamara is spending a few more weeks in Nazaré, trying to nab more bombs before he heads to Hawaii to wait out the Eddie contest’s swell window.  I caught up with an extremely popular McNamara for a phone interview (I had to wait while he finished a live interview with CNN) to ask him about this new big wave arena, the alleged 90-footer, and how Portugal stacks up to other big wave destinations.

GMAC: It’s called North Canyon.  There are lots of different peaks there, we’re just starting to name them.

How long have you been going there?

Since last year, this is my second time, so two years.

How’d you find out about the break?

A local surfer emailed me a picture of it and asked me if I’d come ride his waves [laughs], believe it or not.

So were you the first one to ride it at that size?

I think…yeah, we’re the first guys.  But there are a bunch of local boogieboarders and a few surfers that surf it up to about ten feet.

Really, so it breaks when it’s small too?

What’s on the bottom out there?

It’s a sandbar, but totally on steroids.  It was 15 feet Hawaiian with 30 foot faces today, 40 foot faces yesterday, its gonna be 60 feet tomorrow, outta control.

So is the spot gaining popularity? Are there a lot of tow-in guys there right now?

Not a soul.  It’s just really, really raw and powerful and super dangerous. But the boys will be coming.

A half hour. [Recently] Supertubes was 10 foot faces and Kelly [Slater] came up here and it was 60-foot up here.

Because it’s a sandbar, is it really shifty with a hard lineup to read?

It’s definitely shifty, but the peaks that come in are perfect peaks, they’re perfect A-frames.

What is the ZON North Canyon Project all about?

We’ve been exploring the wave and figuring out what conditions are ideal and we’ve been documenting it on video.  We did a movie last year, [The North Canyon Show] we premiered in Portugal this year, and we’re premiering it in Hawaii December 10th.  We’re doing another movie right now on this year, and we’ll do another one next year.  And this year we’re also doing trials for a big contest that will be here.

Was the 90-foot wave way bigger than all the other waves that day, or was it consistently that big all day long?

There was one set that came in and there were three waves over in the far corner, and three waves on the next peak over, and they were substantially bigger than everything else.  It was a rogue wave.

Was that particular wave more difficult for you to ride than other huge waves you’ve ridden?

On that one everything just seemed to come together, but there was a bunch of chop. I’ve ridden waves that were half the size but almost impossible at the same spot. That wave was a very unique, special wave and everything came together.  If on the drop I’d made any wrong moves it would have been really bad; all those chops were really tough to navigate.

Did you get a lot of bombs that day?

I got one good little wave right before that one to warm up, but that was it.  Once I’d caught that wave I wanted to get more, but everybody else was like “That’s it. There’s nothing else coming in that’s anything like it; we’re done.”  I was like, “huh?” I didn’t quite know what happened.

Can you compare the wave at North Canyon to any other big waves spots you’ve surfed?

It’s very very unique, it doesn’t remind me of any wave anywhere.  Most spots do remind me of other [places I’ve surfed], but this one stands in a league of its own.  It’s just so challenging and mysterious, with so many factors that play into how these waves are received by the shore there.  And it’s all because of the canyon.

So how long does the window for big swells last at North Canyon?

Yeah, definitely.  I have others in Hawaii that are warmer and a little more perfect, but this place is just so challenging and so mysterious that it really lures me back.  I’m going to be coming back here for the next ten or twenty years.  I’m going to be spending September, October and November here.   It’s really nice and warm in September, then the big waves start, October’s already giant, November’s outta control, and then December, January, February, March, April are all giant.

This is a little fishing village. It’s pretty much stuck in time. The women walk around with fish on their heads; it’s really a unique spot.  I’d recommend it for anyone.  The food is amazing, the people are so friendly, they’re second to none.

I noticed that you’re on the alternate list for the Eddie contest, will you be headed to Hawaii for that?

I’m going to be there for the opening ceremony.  I leave here [Portugal] at the end of the month, I’ll be there for the ceremony, and I’ll be hanging out in Hawaii for three months hoping to surf for Eddie.

The video below illustrates the day at Nazare. The wave definitely looks huge, but from this angle, it’s difficult to gauge its exact size. Your thoughts?