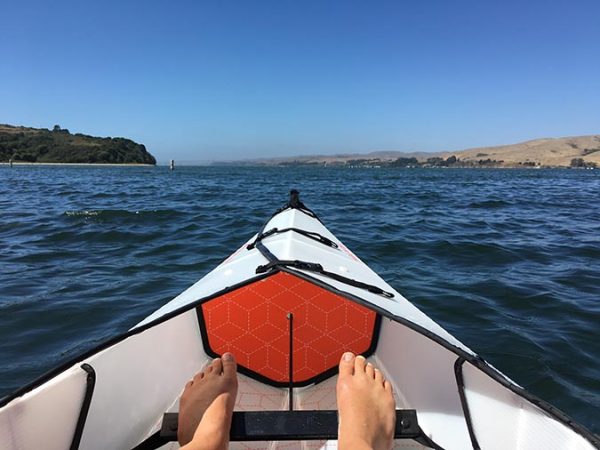 “No one should be kayaking today,” the kayak broker solemnly assured us. Ali and I had pulled into a place at the southern tip of Tomales Bay, near Point Reyes National Seashore, only to be told that the kayak rental operation had been suspended due to the wind situation. The 15 mph gusts didn’t seem entirely dire to us.

“Well, if one were to tempt fate so recklessly, where would one do so?” we enquired.

“Hearts?” she asked over her shoulder.

We nodded as if we knew what they were talking about. We’d  Google Map it later. We were on a mission to test Oru’s new Beach Kayak ($1,175), which folds up into a tidy and highly transportable package – 33″ x 12″ x 29″ – and weighs just 26 pounds. Foldable kayaks have a storied tradition in the paddling world, one that, up until now, I wasn’t entirely familiar with. 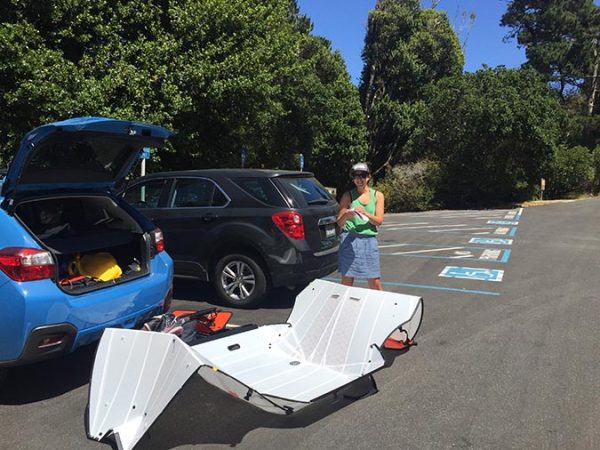 While I was curious about how a foldable kayak would hold up in practice, I was admittedly sold on the concept the minute I saw the thing. My friend Ali, on the other hand, was a total skeptic. When the box arrived, she was quick to point out that both carrying and loading into a vehicle were slightly awkward.

“Kayaks should behave like kayaks,” Ali insisted. “They shouldn’t fold up!”

Despite her suspicion, she was  totally into it.

Hearts Desire Beach, located in Tomales Bay State Park, is a beautiful white-sand expanse that sinks into blue-green water—shockingly warm for the Pacific Ocean. I pulled everything out of the car, opened the instructions—for the first time—and the pair of us set to making sense of them.

It took us roughly 20 minutes to assemble the gleaming, 12-foot polypropylene boat, built to endure 10 years of sunshine and 20,000 folds—among other things—and capable of holding 300 pounds.

Even with my minimal experience, the Beach, as the boat is called, was designed with total amateurs in mind (so one doesn’t need training in the traditions of Greenland paddling to make it go). But I could tell immediately that it didn’t feel like other kayaks: The ultralight polypropylene hull is so thin that you can actually see water sloshing against it, but it paddles smoothly and handles easily. 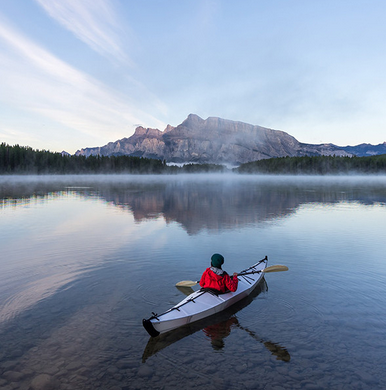 The author sees scenes like this in her future. Photo: Oru

The seat and footrest are adjustable, sturdy, and comfortable. The Beach actually feels more like a canoe than a kayak—except with better maneuverability—which is great for the casual paddler. There’s plenty of room for a backpack, a small cooler, a dog, or even another person who’s willing to sit very close to you.

I figured that beginner kayakers like me do all sorts of foolish things. So I felt obligated to try them all: I wobbled from side to side, steered erratically, and stood up straight without taking on any water. The Beach is 28 inches wide and incredibly stable. I finally forced a woman-overboard scenario and it was only efforts to re-embark that caused the kayak to take on water.

Note that it’s called the “Beach” and not the “Ocean.” I initially failed to differentiate between the two, but the Beach Kayak was designed for calm water—not whitewater of any kind. If there’s a chance that you may encounter rough seas, Oru recommends spray skirts and float bags to keep water out of the bow (front) and stern (back) compartments (not to mention, the ability to actually roll).

Like most kayaks, this one is tricky to empty once it’s full of water, but pumps and sponges can bail you out.

My (less skeptical) friend Greg and I conducted a subsequent test on a foggy Marin County morning. Even though I’d forgotten the kayak’s instructions, assembly was probably three times as fast this time. Oru says that the kayak can actually be constructed and deconstructed in three minutes. 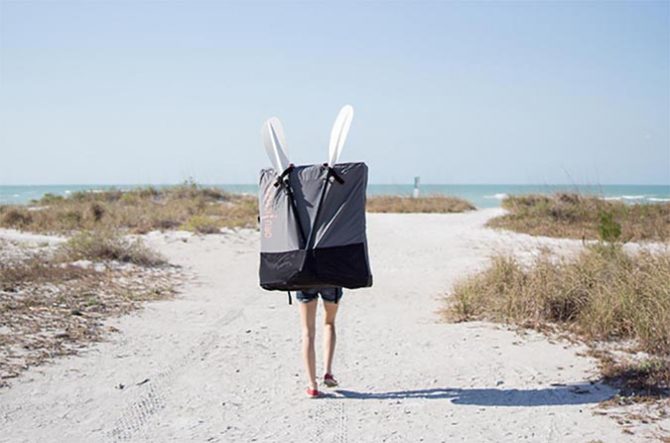 I  paddled comfortably for a couple of hours, tried to pet a handful of seals, and returned to shore with my puffy jacket still (mostly) dry before helping Greg to load his kayak on top of the truck. The Beach was boxed up and ready for effortless transport—inside the vehicle—before he was done securing the straps on his roof.

“I can’t believe you got that thing broken down and all ready to go before I even tightened these straps,” he said.

(I made sure to relay this to Ali later.)

In my month testing the Beach, I kayaked twice as much as I had in the several years prior, and I believe that Oru has fully succeeded in its mission to make watersports more accessible (with a nod to history). The Beach is smart, beautiful, and above all, convenient.

Find out more at Orukayak.com.