Gear We Seriously Test: These Crazy Looking Fins Were Designed to Give You A Spring in Your Surf 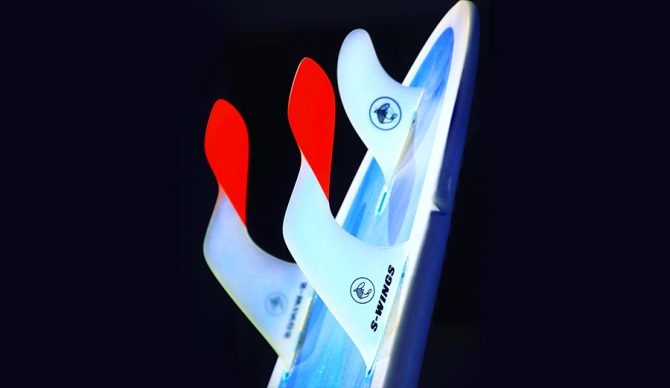 Guaranteed these fins are like nothing you’ve ever seen before. Photo: S-Wings

I’m a sucker for board design. That goes double for fins, and I’m not talking about the hundreds of similar templates on the market that have minor differences in surface area and rake. Mainly because, well, I really believe that only the top surfers in the world can feel those sorts of subtle changes in their equipment.

Since the ’70s board design has changed some, but fin design has remained relatively stagnant (as far as mainstream equipment), apart from the number of fins on the bottom of a board. I’d be remiss if I didn’t mention that there are a handful of passionate, inventive folks that are doing some incredible things with fin design in addition to a company out of the Southwest of France called S-Wings (AU Fins and the Quantum Fin are just a few that come to mind), but the fact remains surfing has a certain resistance to these sorts of outside the box innovations.

When I first saw a photo of the fins S-Wings is making, I had so many questions. And when the opportunity arose to give a thruster setup and a longboard fin a try, I was psyched.

The most obvious difference between standard fins and S-Wings is the long drawn out tip. For a thruster setup, the two leading fins both have these embellishments and are foiled on the outside edge, with a small trailer middle fin. The single fin for a longboard is bigger and looks similar but is foiled on both sides.

The guys at S-Wings call their design “biomimetic” because it draws inspiration from natural fins, i.e. those on a fish. In theory, on a surfboard, the result of the long flexy tip is more spring as you drive to get speed, greater control, and more hold in bigger waves.

Putting the design to the test

For the test piloting process, I was anxious to get these things in the water. And because I don’t actually own a tri-fin, I decided to throw the two leading fins of the thruster setup into my twin fish. I definitely noticed a difference.

There was one moment in particular on a not-so-great, but gorgeous evening in Los Angeles. The setting sun was turning the clouds above this cotton candy pink color, and the water reflected the hue of the sky. I caught one, pumped down the line, and made a section I’m certain I wouldn’t have made otherwise. There was just a tad additional thrust. I used the speed to do a cutback and the board felt more maneuverable, I felt like I had more control. The difference was slight but noticeable. I was sold.

A few days later, I took out my longboard, and when I got my first wave, I was underwhelmed. It could have been the day (the waves weren’t great, and kind of tricky), or me as a surfer, but I didn’t notice much of a difference between the S-Wings fin and the one I had in my board originally.

Maybe it’s because traditional longboarding is more about setting a line and trimming than it is about propelling yourself down the line (as in shortboarding), but the board really felt the same – the difference indistinguishable.

For those looking for a reco, I’d say for the average surfer there seems to be a noticeable difference between standard fins and S-Wings on a shortboard. For longboards, it seems to depend on how much you’re redirecting and driving to get speed. Either way, it’s inspiring how a couple of guys in the Southwest of France are innovating, making surf fins like never before. And word is Tom Curren has even taken notice.