Gear We Test: Made from Carbon Fiber, Drab Fins’ Performance Is Anything But Dull

Editor’s Note: This article is brought to you by our friends at Drab Fins.

Carbon fiber has been receiving a decent bit of buzz in the surf industry as a high-performance material, and with good reason. Lighter and stronger than traditional fiberglass and resin, carbon fiber makes for a super light and durable alternative to traditional fiberglass in board building, and with unique stiffness and flex characteristics, it’s an incredible material for fins, too.

That’s something that Ian Dreher realized when he made his first set of carbon fiber fins at his family’s boat-building shop in Durham, New Hampshire. Born into the Durham Boat Company family, the boat business was always a part of Ian’s future. Part of the business is designing and fabricating carbon fiber parts for rowing boats (which, I just learned, are called shells). Two years ago, Ian decided to translate his skills in designing and manufacturing shell parts into his passion for surfing, and thus, Drab Fins was born. 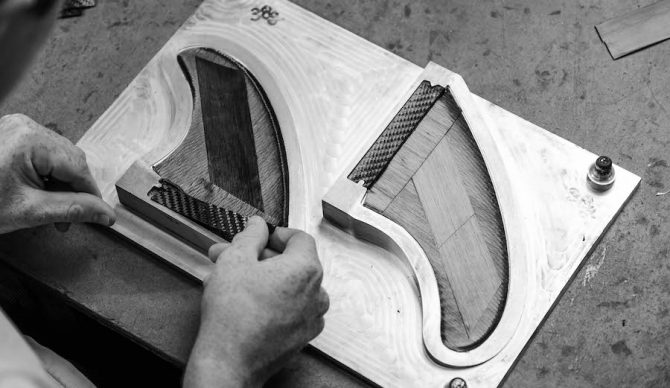 With each set of fins made to order, different layup schedules can provide varied levels of flex and stiffness for a custom ride. Photo: Brayden Rudert//Drab Fins.

Making fins in a high-performance boat factory means there’s a lot of precision tools on hand, but the process is relatively simple. Each fin starts with an aluminum mold that has been precision-milled in the boat factory. Into the mold goes a “pre-preg” carbon fiber layup (carbon fibers impregnated with resin) and a closed-cell syntactic core made of a proprietary blend of materials that is super strong with great flex properties. Being closed-cell means it won’t take on water if damaged, and the ratios of the core can be tweaked to make the fin light enough to float, if desired. 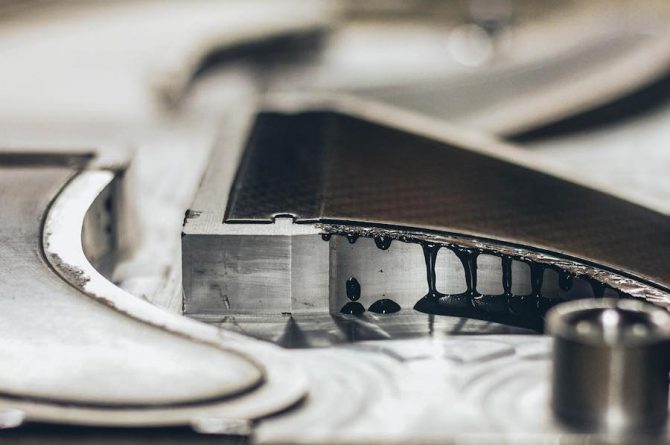 That core is surrounded on both sides by the pre-preg carbon fiber layup and just enough epoxy resin to bring it all together without weighing the fin down. Those materials are then heat compressed in the mold, both curing the epoxy and bonding the materials together with 90,000 pounds of force per inch. This process allows Ian to keep a 35 percent resin-to-cloth ratio, preserving the lightness of the fin, and the flex characteristics of the carbon fiber.

I’ve had the chance to try out Drab’s Power Twin Plus Trailer, as well as the Mikel Twin, an interesting looking shape designed in collaboration with Mikel Evans, a fellow New Hampshire surfer and radical board shaper. Made for high-performance surfing, the hatchet shape (see below) allows the actual fin height and base to be smaller than average while still having the hold of a larger fin. When riding either design, the carbon fiber difference was instantly noticeable. 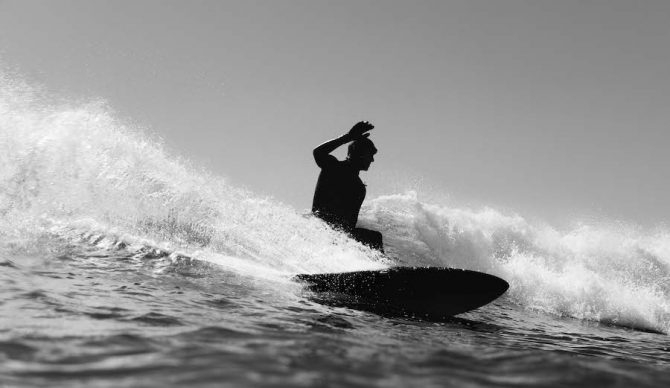 First of all, the light weight is out of this world. Everyone who’s walked into a surf shop knows the classic “under arm” test – if the board feels right as you carry it, it probably is. When you add a set of fins to one end, however, that balance inevitably changes. That’s not so much the case with a set of carbon fiber fins. The balance is unchanged and while I’m no scientist it sure does feel good – both under the arm and out in the water.

Under foot, the fins are super drivey and responsive as one would expect from carbon fiber’s stiffness. Wherever you want to go on the wave, these fins will take you there. With carbon fiber, everything feels a little faster and snappier than usual. To that point, another thing about carbon fiber is that it won’t wear out – believe it or not, traditional fiberglass fins lose some of their flex-back potential over time, a problem that carbon fiber simply doesn’t have. 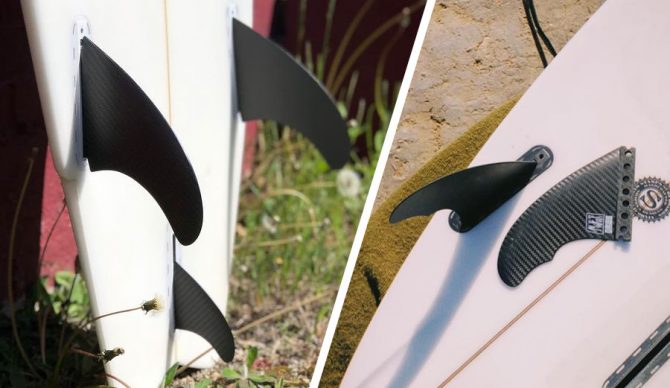 As for the specific fin templates, I loved both but absolutely fell for the Power Twin Plus Trailer design. It almost feels like heresy in the retro-lovin’ surf world we live in today, but I don’t do my best surfing on twins. As a regular foot in San Francisco I’m often surfing on my backhand, where a twin’s looseness and rail-to-rail transitions aren’t the most ideal. The Power Twin changed that for me, providing all of the same speed and looseness of a twin, with just a bit more control and hold through turns thanks to the trailer that let me really drive forward and create the speed I need for maneuvers on my backhand.

And I’m not the only one that loves Drab Fins. A recent collaboration with Ryan Lovelace has these carbon fiber beauties paired up with Ryan’s progressive and thought-provoking surfboard designs. And given the fact that each set of fins is made to order by hand, and with all the different layup options to control flex patterns, Ian and his team have the ability to make the fins you dream of, from carbon fiber, no less. To learn more, or better yet, to try some for yourself, head over to DrabFins.com.