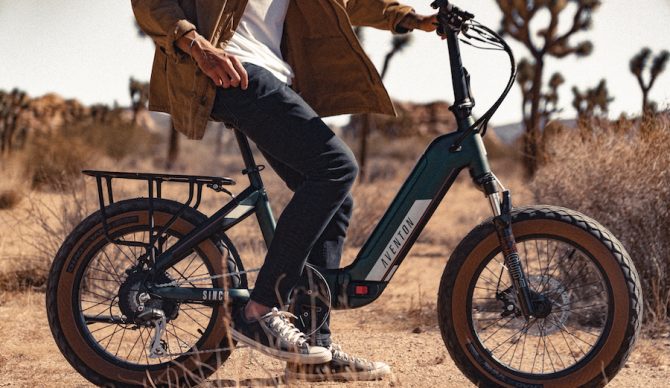 The Aventon Sinch ST is as stylish as it is functional. Photo: Aventon.

Editor’s Note: This feature is brought to you by our partners at Aventon.

E-bikes have been the latest gear craze to take surfing by storm, and with good reason. Many of us surfers live fairly close to the beach, but only a select few live within walking distance to the waves. Those who don’t live close enough to walk often make the choice to drive, the hassle of biking with a surfboard outweighing the potential good to the environment of skipping a gas-powered journey. That’s where e-bikes come in, improving one’s bikeable range and, most importantly, making the trip back from the waves a bit easier when your muscles are shot after a good session. 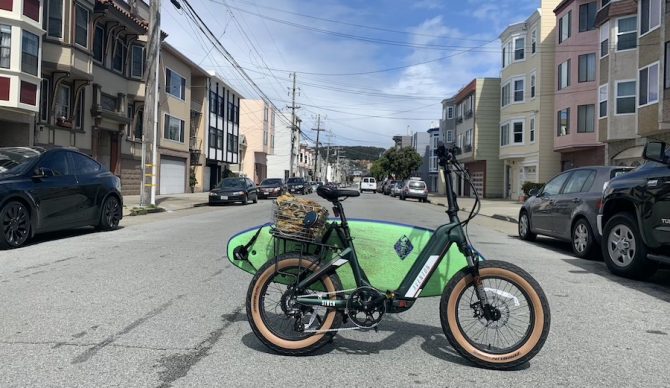 The Aventon Sinch ST makes a great surf rig. Fully loaded with a surfboard rack from Ho Stevie!, the Aventon Rear Rack, and a basket from my local ACE Hardware. Photo: WS

The Aventon Sinch ST, just released last month, takes things to a whole new level. It makes a great daily driver for the ride to your local break with its step through frame and folding design for ease of storing, but with the rugged off-road tires and front suspension, the Sinch ST can be your ticket to remote surf-break access. Just throw it and a couple of surfboards in the back of your car and you’re well on your way to avoiding crowds wherever the waves might take you. Unless that’s Lower Trestles, of course. I got my hands on this rad piece of equipment to test its capabilities as a surf rig, and have not been disappointed. Read on to get the full scoop. 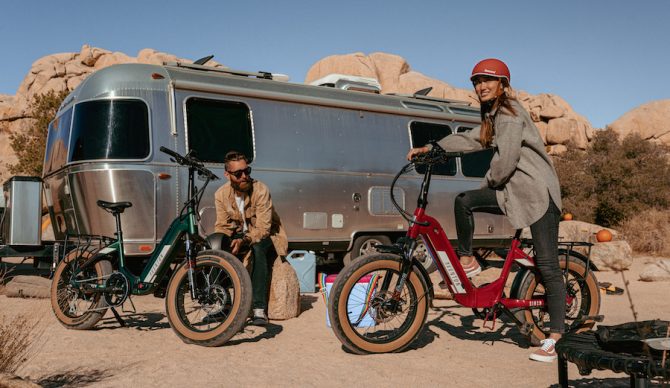 Heading into the desert with an Aventon Sinch ST or two is a recipe for a good day. Photo: Aventon.

The Aventon Sinch has been around for a while, and is one of Aventon’s best selling models. The Sinch ST provides an upgrade on the previous design with step-through capabilities as well as a stylish new finish available in both red and green colorways.

I’m a big fan of the step-through design. It makes getting on and off the bike when its fully loaded – whether that’s with a board or groceries – an absolute breeze, and it opened my eyes to the benefits of step-through bikes. Another very useful feature is the no-pedal throttle, a step up from the throttle on other e-bikes I’ve tried that require a bit of forward momentum before engaging. Not to mention that this throttle (and the bike’s motor) absolutely rip. With the throttle alone, I’m able to reach 20mph in just a few seconds, and the powerful motor maintains great speed going up hills and when fully loaded, super handy for the busy streets of my home in San Francisco. 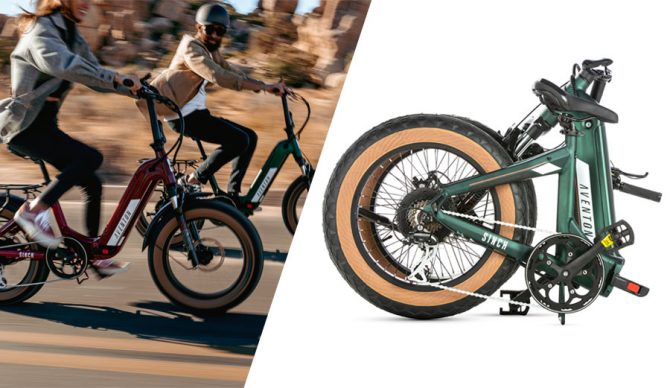 Speaking of San Francisco, the foldable design is not only insanely useful for throwing in a car for remote surf-break sends, but also is convenient for those living in cities anywhere, taking up far less room in a garage or apartment than a traditional bike would. The two large folding clasps allow you to fold both the bike frame and the handle bars for easy stowage and just as easy re-assembly. Even the pedals fold up, making the fully-folded bike a crucial bit narrower for my apartment’s tiny garage.

Another cool feature of the bike is its LCD display, which includes your speed, power output, battery level, trip odometer and more, as well as connecting to the Aventon app which allows you to keep a detailed ride history with plenty of fun stats and the ability to connect socially with friends, family, and other riders who use Aventon. And don’t get me started on the battery. I ran this puppy into the ground, letting the battery get down to 15 percent, and was astonished at how much juice was still in the tank. E-bikes often start to lose some umph as they get into the lower percentages, but this guy was still chugging away at top speed with only a fraction of its battery power left. 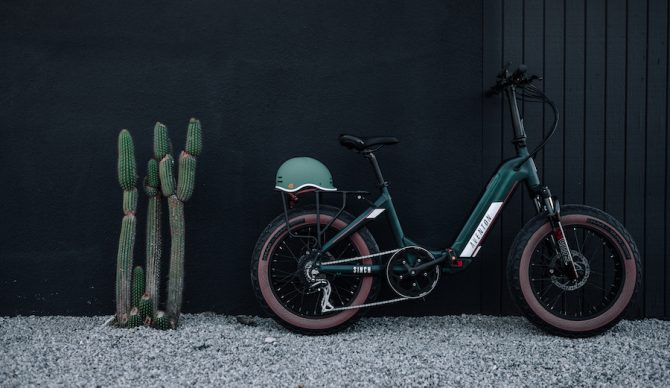 Best of all, despite the premium looks and functionality of the bike, the Sinch ST clocks in with a surprisingly low price tag of $1,799, a steal compared to similar foldable e-bikes that can cost up to $6,000 dollars.

So far I’ve had a blast shredding around San Francisco on this rugged and portable contraption. To learn more or get one for yourself check out the Aventon Sinch ST on Aventon.com.