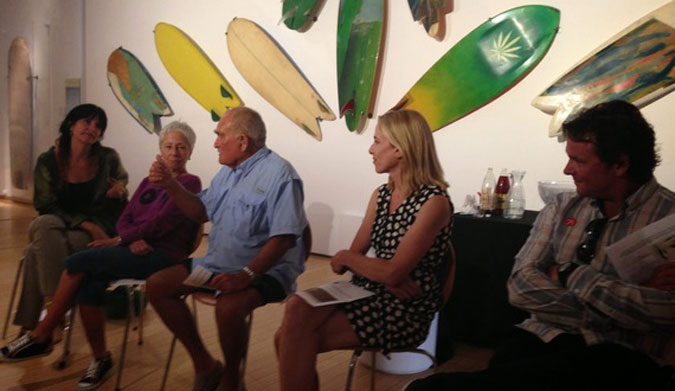 The Mingei International Museum in San Diego is currently holding an exhibition on surf craft, and I recently visited for a book reading with Dr. Jess Ponting who was participating in a panel discussion about the book. The book was Gidget, a book that later became a film that has had a profound impact on global surf culture. Amongst those discussing the importance of the book on early surf culture was Linda Benson, who at the age of 15 won the Makaha international surf contest in 1959, not to mention being the first woman to ride the huge surf at Waimea Bay on the North Shore of Oahu. Later on Linda featured in a number of films including the sequel to Gidget, Gidget Goes Hawaiian.

Listening to Linda speak about the impact Gidget had on her life and those of her generation emphasised to me how the role of the media and imagery are innately woven into our cultural and lived experiences. And fast forwarding from 1959 to today, in a digital age the proliferation of this invades our lived experiences on a daily basis. Where the real begins and the virtual ends is the topic of much musing amongst poets, critics, academics and Geoff down at my local pub.

I don’t want to get too The Matrix about this, but we all to a lesser or greater degree construct the reality around us picking and choosing between our daily experiences, personal history and that beyond our lived experience, that which is mediated. And in surfing we are all acutely aware of what the iconic, awe inspiring imagery of a wave, in whatever medium we chose to experience it, can evoke in the human spirit. Jess describes this as Consuming Nirvana and explores the impact this has on surf tourism.

And the spectrum of surf films are as broad as in any other genre. From Litmus with its unforgettable animated dream sequence (recently screened at the London Surf Film Festival) to lighter films like Sik Joy through to documentaries like Splinters and Manufacturing Stoke that speak to the social, environmental and economic impact of surfing. In 1996 it was surfing as imagined through films that sent me beyond the South West peninsula of the UK, on a pilgrimage to Indonesia. A search for Nirvana, perhaps, the stark reality of my first visit to a less developed nation though, very far from it. And my subsequent interest in sustainable development undoubtedly stems from this mixture of lived experience and virtual memory.

Today the use of film and media in real time through the web is increasingly important for the projection of surfing globally and all the cultural issues that go with that. This is especially the case when it comes to surfing’s professional competitions which are now a far cry from the early days of competitions like the Makaha International. To get a feel for this first hand, and as part of a broader research trip I visited the 2012 Nike Lowers Pro competition held at the world renowned Trestles break in Southern California.

Before you reach the contest area the importance of film is clear, as you cross the threshold into the competition space – you become part of this virtual world. And with millions watching the action in the water from the comfort of their homes as well as those that had travelled to the contest, all kinds of sustainability related issues come to mind.

With sustainability in mind, my guide for the weeks’ research trip was Kevin Whilden, co-founder of Sustainable Surf. Sustainable Surf has made remarkable progress integrating sustainability into the surfing world. Along with initiatives such as Waste to Waves, Ecoboard Certification and Deep Blue Life, Sustainable Surf has also greened surfing contests through their Deep Blue Surfing events. A Deep Blue Surfing Event address issues directly related to the local contest area including waste reduction, protection of natural resources, and the building of stronger communities. Events with this designation also reduce direct threats to the global sport of surfing itself, such as: sea level rise, ocean acidification, and the loss of the world’s living coral reefs, which leading scientific institutions warn are already harming our oceans, waves and beaches.

Kevin had also arranged for me to interview a number of people that would help me explore sustainability within surfing. So, after watching Gabriel Medina win the final heat, from the water just outside the competition buoy it was time to get on with some work. My final interview of the week was with Steve Long, 30 year San Onofre State Park Lifeguard and administrator as well as father of Greg and Rusty Long, famous big wave surfers. Inspired by my trip to Trestles I was excited about meeting Steve and learning more about Trestles and San Onofre.

It was a very good interview, the kind where I had to say very little and the person doing the talking was hugely knowledgeable and articulate, as were all of my interviewees, of course. Steve is a man with a wealth of insights into the history of San Onofre and surfing with important views on sustainability and how this related to his career and his personal life. From a sustainability perspective, Trestles poses year round sustainability challenges. Located in the San Onofre state park it has many competing issues–and as Steve put it–managing San Onofre was very much like managing a small city.

Interview over with a lot to think about, it was time to head home, so goodbyes said and a trip via the Super Shuttle from San Clemente to LAX, I boarded my flight to Heathrow. I started talking to the young lady sitting next to me, who, I think realizing that I was not a happy flyer, distracted me for take off, landing, and large parts of the conscious bits of the flight in between, for that matter. It appeared we both upgraded our seats for 40 dollars in order to secure the converted extra few inches of leg room.

Andrea von Foerster is one of Hollywood’s leading music supervisors. You are forgiven if, as I was, you are unaware of what a music supervisor actually does. Andrea explained it to me, and in a nutshell a music supervisor finds music for films – which is, I think Andrea would agree, a wildly simplistic view of the job. This is very clearly highlighted by the fact that Andrea gets over a 1000 emails a day as well as travelling all over the world sourcing music for the films she is working on. When we met she was travelling from LA to Brighton for the Great Escape music festival where she spoke on a panel about licensing music for film and TV as well as checking out emerging artists. To her list of credits Andrea has created the soundtracks for 500 Days Of Summer, Bellflower, Chronicle, Modern Family, Don’t Trust The B In Apt. 23, and more.

But by now you are asking yourself what have these loosely cobbled together events got to do with Mavericks and where is the serendipity as promised in the title of this piece? Well, at the time I met Andrea she was working on her most recent film Of Men and Mavericks, later to be renamed Chasing Mavericks, the story of Jay Moriarity. And there it is. In the morning I interviewed Steve Long, father of Greg Long. Greg Long was the stunt double for Gerard Butler in Chasing Mavericks. So in the same day I was interviewing the father of one of the stars of the film and in the afternoon I was sharing a flight with the person responsible for putting the soundtrack to the very same film.

Now is it just me or would you be hard pushed to make these sorts of coincidences up?

Wake up Neo, The Matrix has you…

This piece was originally published on Huffingtonpost.uk.com