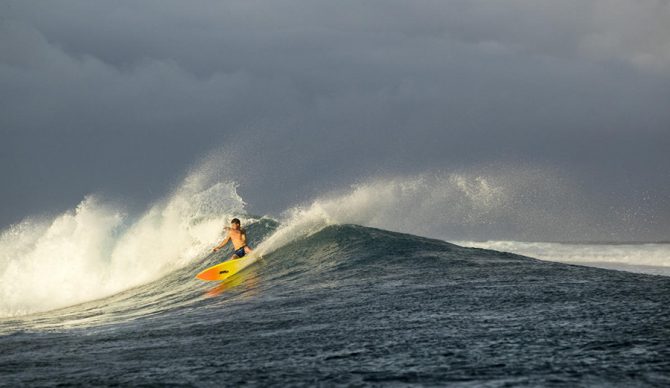 Glenn Hall has undoubtedly made a mark on the World Tour in the years since his retirement as a competing surfer. When Hall retired after the 2015 Pipe Masters, he next stepped into a role as Matt Wilkinson’s personal coach, almost immediately elevating Wilko from a middling CT pro to a perennial title contender. Wilkinson wore the yellow jersey most of that first season with Glenn Hall as his guide and since, Hall has taken a laundry list of other professionals under his wing as well as up and coming groms.

Here are some words of wisdom from the former World Tour competitor who is now one of the best coaches in the game.

How was life growing up in Avoca?

I actually grew up In a town called Umina, about 20 minutes from Avoca. It’s a great little community of supportive locals. When I was younger I had guys like Dave Neilson and Drew Courtney to look up to who were from Umina. We had a number of other great athletes in other sports doing their thing which I took inspiration from too. But the whole central coast area had so many great surfers and athletes in other sports to take inspiration from. I was very fortunate to have people to help me throughout my career and I’m very appreciative to all of them.

You were the first person to surf on the Tour for Ireland. Can you explain to us your reason for wanting to represent Ireland and not Australia?

I grew up in Australia and surfed for Australia until I was about 32, then I decided to take on a new adventure with my wife and explore my heritage. We spent a few years based out of Europe and I decided to represent Ireland during that year on the WQS. I also did some of the UK Tour events and just enjoyed new people and different events appreciating my Irish background. I grew up in Aus and surf for Aus and am proud as fuck to be Australian, but I’m also proud as fuck of my Irish side. So through those epic times, I got to learn more about all that. I represented Ireland on the WQS and got some sponsor opportunities and then ended up qualifying for the WT. I was worried the Irish surfers were going to be bummed that I was the first to represent the country because I am not full born and bred Irish. It was actually the opposite and I had so much support and I think it motivated a lot of the young Irish rippers, which makes me so stoked.

This one crew of Irish blokes turned up at a bunch of the WT events chanting popular songs replacing the lyrics with my name. It was classic. After one heat at Bells, I came in and they were there all fired up and being so funny. It was the first or second heat of the day so it was early but they were either already drunk or still drunk from the night before. I had a shocker in the heat and lost to Kolohe and when I came in they were cheering like I had won the comp. One of the guys said to me, “That first wave was fucking sick!!” And I said “Thanks, but it was only a three.” He replied — so fired up — “IT WAS A SOLID FUCKING THREE, THOUGH!”

I was losing it laughing.

Can you talk about breaking your back that first year on Tour surfing in the Fiji Pro?

Yeah, my year was rolling on ok and I was feeling good and having fun. Then at Fiji, I was against Jordy at pumping Restaurants. The wind was a bit up the face during our heat and hard to surf so I thought if we sat deeper I would have the advantage on my frontside. We were pretty deep and this sick drainer came and I pulled in but was too deep. I got wrapped around a coral head and was in the full scorpion position with the force of the ocean flexing me over the rock. I eventually got rolled off the rock and popped up and felt like my body was all jelly. It was a weird feeling but it felt like my body was going to get ripped in half if I got smashed by another wave. I just snuck back out getting through a big set without getting sucked over. I slowly paddled back out thinking to myself that it was just like a kicked shin and it’s really fricken painful but it will go away soon. I figured I was cut up really bad but cuts are ok. I sat there waiting for another wave but something weird in my brain wouldn’t let me ever picture getting to my feet. I paddled for a little one and all I could picture was lying down going straight down the wave and nosediving without even getting to my feet. So that was it. I paddled to the ski and went in. Got a chopper from Tavarua to Namotu that arvo, then a chopper the next day to the mainland and a private jet home to Australia for X-rays and scans. Results were three fractured vertebrae on the right side.

What about the time you and Gabriel Medina famously nearly came to blows at the Quiksilver Pro?

It was all blown out of proportion so bad. We had a heat where things got scrappy and we had a few words. It’s what happens in sport. Gabby is the kind of guy who likes to get stuck into it in a heat and I didn’t mind that either. So we had what I think was a good old-fashioned battle with a few words exchanged. No hard feelings between us, it just got blown out. It was a real example of how stupid the whole cyber world can be and how many cyber heroes there are who think writing brutal nasty shit on social media is supporting their heroes. Gabriel and I sorted it out the next morning and we agreed it was not an issue. We get along great. Gabriel didn’t need anyone to fight his fight for him so all the dorks writing death threats is just sad. I went to Brazil after reading so many death threats and hectic messages and wasn’t sure what was going to happen. It was scary. It turned out I didn’t have one person approach me in a negative way. 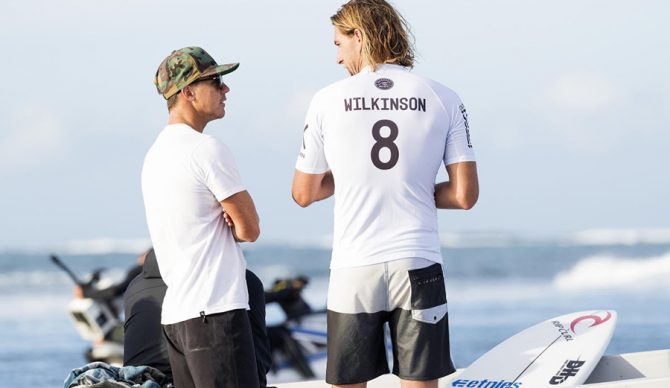 You coached Matt Wilkinson and you were credited for his clear turnaround as soon as you stepped into that role.

Wilko had so much talent but never gave it that chance to be utilized. He finally put in a lot more effort and started to gain confidence as he got fitter, smarter, more prepared, and more skilled. He got off to a flying start and it rolled on. He did great surfing and with the training, I just tried to help guide him to have balance and keep him prepared mentally and physically.

You have set up your own surf academy, talk us through it?

I just have a small crew of groms that I have worked with over the last few years and the WT crew. Its turned into a bit of team environment and they all feed off each other. I try to connect the groms with the WT crew as they both have something to offer each other. It’s a really fun crew and I really try to be holistic in my approach. I want to help them be happy, healthy people as well as successful in their sport. I like getting the opportunity to work with new groms or WQS crew as it keeps it fresh and I get to learn from them too. I’m very lucky and enjoy my job.

Are you still traveling with the CT as a coach?

Yeah, I still do most of the events with Owen and Tyler Wright, Wilko, Ace, and Conner Coffin.

I’ve been trying to build my skills as a coach/mentor and have been communicating with athletes and coaches in other sports. Working with these athletes and coaches has allowed me to learn so many news things which has been really fun. I like learning and passing it on to the crew I work with.