Going Back to Cali: When a Surf Trip Isn’t Really an Escape at all 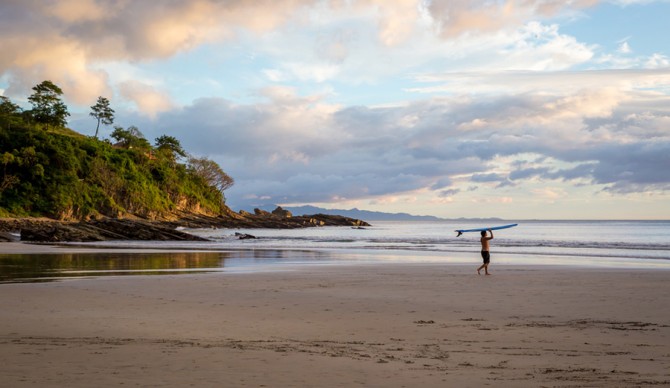 “None are so helplessly enslaved as those who falsely believe they are free.” – Goethe

On our third day at the Hacienda, Solomon, the magnificent green parrot, wrestled himself free from his neck leash and flew away. I examined his empty cage, filthy with droppings and cracked sunflower seeds spilling onto the terrace tile, and smiled. Birds aren’t meant to be in captivity, I thought. Birds are meant to fly free. I reveled in Solomon’s rebellious spirit, when in his master’s drunken neglect, he seized his opportunity for freedom and ran with it. Carpe Diem. Sticking it to the man. Lucky for Solomon, I thought, he would now fly to the winds of his own free will, as nature intended him to do. Why would Mother Earth give you wings if she didn’t want you to fly?

I worried about whether Solomon would remember how to feed himself in the wild. Would Solomon survive the power in his natural-born, newfound freedom?

“Let’s go surf,” my friend-slash-chicas-surf-trip-partner-in-crime woke me from my cageside daydream, reminding me that light offshore wind and perfect headhigh beachbreak awaited our post-breakfast paddle-out. We loaded boards in the car and headed for the Beach Club, Hacienda residents and paying guests, only. Security guards at two gated checkpoints made sure that rule was well enforced, keeping us safe from local intruders, many of whom might also have overcrowded the limited access surf break, dotting the otherwise California-white line-up with dark brown skin and homegrown barrel dreams of their own. Instead, aside from the few Nicaraguans who lived or worked inside, local surfers had to walk in, forty minutes or so along the beach from the closest town south down the Coast. Because north was fenced off and gated, too.

In the colonial era in Central America, haciendas were large, elite-owned landholdings often linked to the encomienda system of forced native labor for production en masse, under the supervision of local land administrators, to serve colonial settlers and, ultimately, the Spanish crown. Becoming increasingly further integrated into market economies as a lucrative privately owned, profit-generating model of land ownership and production, the Hacienda as an institution lived on well into the twentieth century. Under conditions that might be described as feudalistic at best, and slavery at worst, native people worked the land for little to nothing in return, to the overwhelming financial benefit of the estate owners and their local land bosses who often earned a reasonable percentage of profits. As a throwback to colonial tradition, large estates are still referred to as haciendas in many areas of Central America, while it is widely agreed that the hacienda, as an institution, is now but a dinosaur of the region’s egregiously unjust and horrifically violent colonial past.

My experience, however, tells a different story about a dinosaur of a different color. Just having arrived from ten days spent in Southern California, I left Costa Rica for a weeklong surf trip in Nicaragua. And after a six-hour drive and a miserably easy-cause-we-have-the-right-passports-and-a-hundred-bucks-to-pay-off-whomever border-crossing, I found myself, undesirably, back in California, at the Hacienda. A gated community with beachfront mansions owned by well-to-do white men. Their construction impeccable, landscapes tidy and pools kept crystal clear by the meagerly paid labor of hired hands – dark, of course, by necessity in a modernizing tourist reality in the throes of gentrified development to the tune of golf courses, restaurants, surf shops, the spa and an ice cream parlor; their labor celebrated as supporting the local economy, from the privileged social position of a normalized settler colonial mentality. Sunburnt backs and balding heads surfed away their endless summer days, admiring purchased breasts, poolside and perky in delicate designer bikinis. As if I hadn’t had enough of that in Newport and Cardiff-by-the-Sea, I shined it on in the discomfort of the most comfortable bed I’d slept in in years. I was everything I hate.

A young bearded man from Florida, just passing through on a weeklong surf trip, chatted me up at lunch at the Beach Club one day. An older bald man who owned a place and lived inside the Hacienda stopped over and told us he was headed to get a massage.

“Oh nice,” said the beard. “Where can you get a massage here?” Innocent enough.

“You know,” responded the bald head, “I got a girl at the house. She does a real nice job. Cheap.” I nearly drowned in my glass of ice water. Despite days of perfect waves, I had been feeling uncomfortable in my skin since we got there. And it wasn’t just the mosquito bites on my ankles. Overwhelmingly aware that my presence there perpetuated the forms of surf neo-colonialism I sought to transform, I swallowed my shaky, self-righteous integrity, down deep into bubbly guts of hypocrisy. I went about my days drinking two-dollar Toñas by eve and trying to get perfectly pitted by day. Just like everybody else. Even the epic acai bowls gave me heart-burn before I barely left the breakfast table.

On day five at the Hacienda, a few more of our girl friends arrived and we nestled in to the four-bedroom mansion we had rented for the weekend, complete with maid, chef and security guard. It was how we deserved to live, we decided. We used banana leaves as mini skirts for the gringo-riffic ‘anything-but-clothes’ party. An Australian wore half of a small watermelon that kept sliding to the side. The Italian from Jersey fit himself into a red pringles can, Original flavor. We guzzled 7-year Flor de Caña and danced til we dripped sweat onto the beer-soaked floor, like sorority girls at the state-school frat party. At  least that was the last time I could remember being anywhere near that kind of drunk. Coulda stayed in California for that sorta shit show.

Doing my part, I grinded all up on a 22 year-old local surfer – the only non-white human I could find in blurred vision and darkened mood lighting. In fact, I probably would have taken him home, sure to suffer the onset of oceans of regret in the sobering light of morning, if not for the saving grace of my seasoned low tolerance and propensity toward projectile vomiting, both kicking in simultaneously, just in the knick of time.

All barfed out, with a mess of banana leaves beside the bed, I passed out, gratefully alone, below the heaving A/C, topless on top of crisp white sheets, back home safe at the mansion, security guard and all.
“Is this what a surf trip to Nica is supposed to feel like?” I rolled over to ask my friend in the morning. I couldn’t even peel myself out of bed to go paddle out. She grunted, opening an eye still lined with smudged black pencil.

“And I can’t believe we have a guard,” I went on, truth in the form of word vomit the lovely leftovers of last night’s eye-opening debauchery. He was paid probably $20 a night – less than we spent on a bottle of rum – to sit on the porch from dusk til dawn so we could escape reality, drink til we danced on tables in the reckless abandon of anonymity in this unknown, unreal gringo world with alias fake names we created to hide even from ourselves.

“It’s his job,” she responded, groggy in earnest. “What’s so wrong with it? Do you know how many of his friends and relatives would kill for that kind of job around here? It could be worse.”

I felt sick all over again.

In our tourist lifestyles and economies of privilege we somehow convince ourselves that this is okay, that actually we’re doing this man a service by being there so that he might have a job, earning the envy of his kin. Because what other choice does he have? He’d be worse off without us, we think. They all would. They wouldn’t even be able to feed themselves. Right?

In the colonial days of the hacienda, native labor made little-to-nothing tilling the land and raising cattle so the land-owners and their well-paid land bosses could amass a hefty profit. In judgment of a dirty colonial history, we call that slavery and imperial capitalist greed.

Today at the hacienda, native labor makes little-to-nothing taking care of surfers and tourists like me so private property owners and their well-paid gringo property managers can make some decent dough. And we call that normal. Worse, we call that employment and development, and write it off as a day at the office; a good deed done.

Why can’t we see it for what it is? Colonial legacy informing structural white supremacy beyond borders; tourism and private property ownership in foreign lands our economic weapons of privilege. Colonizing land, people, nature, culture. And worse, colonizing our own minds and those of all who seek to emulate our Western-modern ways of life, in the process. Enslaving ourselves and others in guilty acts of a supposed innocence disguised as “just the way things are.” We refuse to see it for what it is, because it implicates us all in our manifest destiny-inspired pursuit of epic surf adventures to wild frontiers the world over. And with money in our pockets, history on our side, and endless summer waves in our dreams, that’s a reality we’re unwilling to bear.

It isn’t natural or inevitable that these relationships and realities persist, but rather the result of our collective colonial histories, and the ways in which our mentalities and behaviors perpetuate modes of being that enforce the status quo of inequality, privilege, racism, classism, exclusion and marginalization, and do nothing to enact more just alternatives. What might the Hacienda look like if local people were consulted in the future of its development? If money wasn’t the sole arbiter of access to places and natures, epic waves and utopian social futures? What if at places like the Hacienda, people stopped re-creating the American country club lifestyles they were escaping in the first place? What if Nicaragua felt a little more like Nicaragua and a little less like San Diego? How do we get there from here? And why aren’t we even talking about things like that?

On day seven at the Hacienda, I learned Solomon the parrot had been rescued by a Nicaraguan day-laborer who climbed up a tree to save him like a kitten and take him home to his cage back on the terrace. It wasn’t the first time he’d flown away, in vain.

“He must have been getting hungry,” Solomon’s master’s wife, sullen and skinny as all hell, told me later that day. “So he just sat up in the tree waiting for us to go get him and bring him home.”

Long pause. She kinda creeped me out, that lady. But I think she meant well.

“I don’t like that he lives in this cage,” she went on. “It’s sad. But I guess that’s just the way it is here.”
I looked Solomon in the eye through the bars of his impossible home. I wondered if he could sense my disappointment, feel the hope in my spirit.

“He wants to fly,” she continued in my heavy silence.

“He wants to fly free, but he just loves eating out of the palm of our hand.”