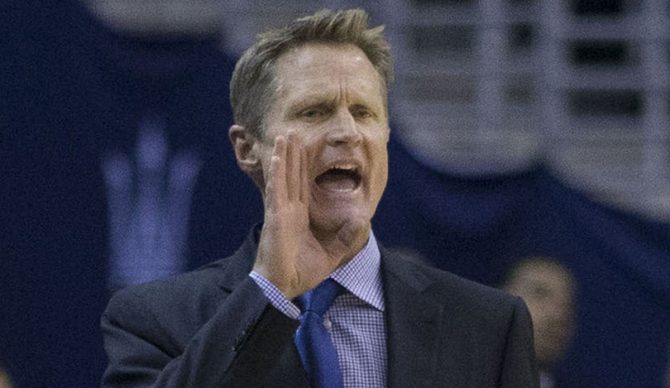 At first glance, Golden State Warriors Head Coach Steve Kerr resembles more of a surfer than a guy orchestrating x’s and o’s in the NBA — or maybe even a ski bum. Maybe it’s the blonde, spiked hair, blazing blue eyes, or the Southern California vernacular. Either way, Kerr doesn’t strike the uninformed onlooker as a seven-time NBA Finals champion.

But while Kerr’s professional accomplishments are rooted in the game of basketball, he actually considers surfing one of his true passions.

I’ve maintained a close relationship with several members of the Golden State Warriors throughout the years, from my early days covering the team while working in the San Francisco Bay Area sports media industry. And I’ve had this curiosity for a while to interview their Head Coach, Steve Kerr, to talk about surfing. I’d read numerous stories over the years with Kerr casually mentioning that he surfs. There’s no extensive discussion about it, no voluminous details, no minutiae of surf lingo and exposition, just random references here and there that among Kerr’s passions, hobbies, and interests, surfing is one of them.

I finally got my chance to sit down with Kerr when the team came to town to play the Denver Nuggets. The conclusion of a morning team shootaround is the best time to request one-on-one interviews, which I wanted with Kerr — one of the very rare moments in the day when players and coaches have some free time. So when Kerr was finished answering questions in a sea of local beat reporters, I introduced myself and sat next to him on some courtside chairs.

Kerr, who is incredibly media savvy, didn’t hesitate for a moment to jump right into a conversation about surfing. “I love to surf,” he said. “I’m not very good at it, but I enjoy it.”

Kerr then surprised me in revealing that over 10 years ago (Kerr didn’t remember the exact date of the issue), Surfer Magazine did a profile story on him that was published in their print edition.

“I was used to being in basketball magazines,” Kerr said. “All my surfer buddies who are way better at it than me, they were all like, ‘You’ve got to be kidding me. You’re in Surfer Magazine? You suck!’ But I love it.”

He retired from the NBA in 2003 following a 16-year playing career where he won three World Championships with the Chicago Bulls (including the title-winning shot from a Michael Jordan pass that clinched the Bulls’ fifth World Championship in the 1997 NBA Finals) and two more with the San Antonio Spurs. Following his retirement from playing professional basketball, Kerr’s former teammate, Jud Buechler, convinced him to move to sunny San Diego.

“When I retired from the NBA and moved to San Diego, Jud Buechler, my former teammate in Chicago and U of A (University of Arizona), he’s a really good surfer. He lives in San Diego, and one of the reasons why I moved there was because I would go visit him,” Kerr said. “I fell in love with the place. So as soon as I moved out there, we went and got a longboard and he took me out to the ocean. And I’ve been enjoying it ever since.”

“Jud picked up surfing growing up in San Diego, but like me, he was focused on basketball growing up,” Kerr said. “So he didn’t surf as a kid, but he picked it up I think right out of college. And he’s a really good surfer. So when I moved to San Diego, Jud was the guy who kind of turned me on to it. I really picked up surfing when I moved there.”

Kerr had opportunities as a kid to get into surfing. Despite growing up in Pacific Palisades, California — a ten-minute drive to the surf mecca of Malibu — it wasn’t until later in life that Kerr started surfing.

“I grew up on the beach in L.A. Body surfed. Boogie boarded. But I didn’t surf growing up,” Kerr said. “I’ve always loved the ocean, having grown up in Pacific Palisades. I was too busy playing sports. It was a little different culture back then too.”

I told Kerr that I’d lived in Encinitas for four years, and he said that’s his favorite place to surf. I asked if he liked surfing Swami’s, a world-class wave just north of Cardiff by the Sea.

Then the NBA coach rattled off his quiver of surfboards.

“I’ve got a couple of boards,” he said. “I’ve got an 8’2’’ kind of egg-shaped mini-longboard, and then I’ve got a longer longboard that’s nine-and-a-half feet or something. So the nice, slow break is perfect for me.”

While Kerr humbly plays himself off as a novice surfer, he surprised me with some intricate local knowledge of his favorite peaks in Del Mar, which is closer to his offseason San Diego home.

“15th Street (in Del Mar) has a nice reef,” Kerr said, before adding with excitement, “Actually, the best is to go down to 11th because everybody goes to 15th Street. But the reef extends down to about 11th. There’s a nice peek down there, and not a lot of people.”

Kerr mentioned that he didn’t garner significant attention when he went out surfing, which was surprising to me given how recognizable he is. Then again, Kerr does blend in perfectly with the surf crowd.

Kerr had back surgery following the Warriors’ 2015 title. Since the surgery, he’s has suffered chronic back pain and he’s strongly advocated no getting surgery unless it’s absolutely necessary. I asked if the pain affected his ability to surf.

“I haven’t been able to play golf, which is my other passion,” Kerr said. “So the last two years, it’s been rough not golfing. But surfing feels good. It’s the salt water. It’s the exercise. I think the paddling is actually good for my back. Not much stress, no pounding. It’s something I’ve still been able to do.”

Kerr hasn’t tried to convince his Warriors players to give surfing a go, but a member of his coaching staff does join him in the ocean.

“My assistant coach Q (Bruce Fraser), he and I surf together in the offseason in San Diego,” Kerr said. “He lives there too.”

Given we were in Colorado, I shifted the conversation to a more apropos geographical topic. I asked Kerr if he ever tried any snow sports, such as snowboarding or skiing.

“I skied one day in my entire life,” Kerr said. “I was in seventh grade. I was in Salt Lake City for the NCAA Tournament. I was a ball boy for UCLA. So it was March I guess. I went to Salt Lake for the game, and there was snow. We went up to Park City, and it was the only day I ever skied.”

In another life, Kerr said he sees himself skiing the snowy slopes of the Rocky Mountains.

“The basketball career does not allow for much skiing, between injury and the fact that the season goes on right during the winter when there’s snow,” Kerr said. “But it’s something that I know, in a different life, I would have loved. Because I love the outdoors. I love the speed. I love the feeling of the wind in your hair. But it wasn’t meant to be for me.”