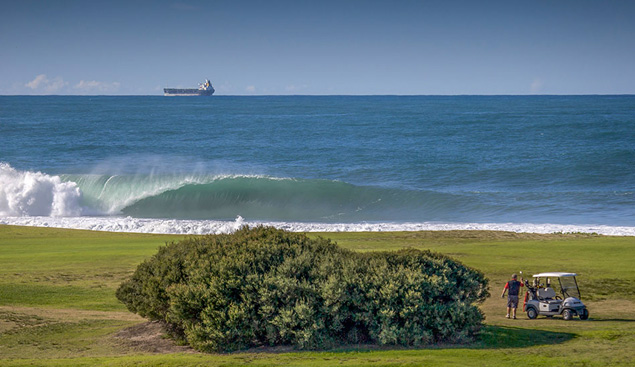 Golf and surfing, more closely related than you may have thought. Photo: Steen Barnes

Just as Kelly Slater doesn’t need someone to tell him which board to surf or whether he should go left or right, professional golfer Adam Scott doesn’t always need a caddy either. Despite that, when Scott’s caddy was given an off-week, the golfer brought on pro surfer Benji Weatherly to carry the bag at this past weekend’s Sony Open down the road from Waikiki Beach.

The two aren’t exactly strangers as Weatherly told CBS Sports the two have been on four surf trips already. In fact, the two bodysurfed with Kelly Slater on Tuesday of last week, before the tournament began. On Adam Scott’s bodysurfing prowess, Weatherly was impressed and said, “He’s not scared. The waves were eight feet and pretty big. We went out body surfing. It’s pretty neat to get him out there. Kelly Slater was out there, cut some waves for (Adam).”

Outside of Steve Williams, Adam Scott’s caddy, and formerly Tiger Woods’, Benji Weatherly claims a surfer is an ideal caddy for a golfer as he believes the two can relate. He said this about the two in their respective arenas: “Golf is the same as surfing — it’s just you and you can’t blame anyone else. It’s you against the elements. I’m going to be like his life coach and try to give him confidence. He’s just so good.”

Adam Scott finished the 2014 Sony Open at equal eighth place, a little off pace from his second in the world position on the PGA Tour. While Weatherly may not have been the good luck charm Scott needed to win, there wasn’t much he could’ve done. His role was set in stone from the beginning: “He can carry the bag, that’s all I need him to do.”