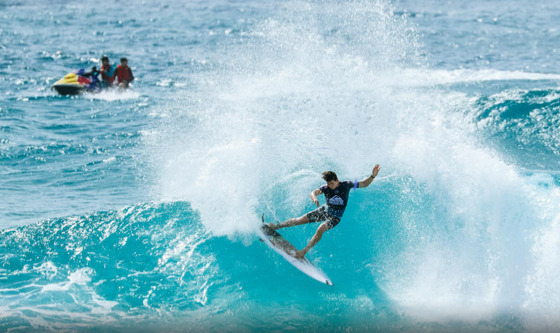 Griffin Colapinto is out at Bells Beach. Photo: WSL

It was the eve before the second CT contest window of 2019 opened, and big, rugged, blustery Bells…was chuckin’ a sickie.

If you’re unfamiliar with colloquial Australian, that means calling in sick. Torquay Front Beach on April 16 looked like a placid lake, and as the moon rose over The Esplanade, WSL Contest Director Kieren Perrow was overheard saying, “It’s really small…pretty annoying actually,” as he finished an early dinner with friends and family at the popular eatery, Fisho’s.

Meanwhile, the crowd started to fill in next door at Bomboras, which was closed for a private Surfing World magazine event to celebrate the opening of the window. The cheerful din and clinking glasses had everyone putting on a happy face and selling it: it’s the world’s best surfers on waves that will hopefully be surfable sometime in the next ten days, everybody raise a glass!

At dawn on the morning of April 17, KP looked like he’d barely slept, his hair ruffled and his eyes decidedly not stoked as he told Rosie the call was an easy and obvious lay day. Luckily for everyone, that Tuesday was shockingly hot in Southern Victoria, and the area beaches were packed as people sought refuge from the unseasonal tropical heat in the dismaying lake that was the Tasmanian Sea.

The WSL’s elite found a tasty hole-in-the-wall cafe to dine at in relative obscurity, a family joint called Yummy Tummy whose entrance is guarded by two friendly pups that welcome diners with wagging tails. The commentary trio of Rosie Hodge, Joe Turpel, and Ronnie Blakey were enjoying the sun out front just after the morning show ended, and later that day Bells hero Mick Fanning was spotted having lunch there as young groms whispered, “Is that him? Do you think it’s him?” while a visiting German from the adjacent Bells Beach Backpackers swooned over her bowl of soup.

Meanwhile, back at the event site, the local security team was bored and baking in the heat. One affable guard with the build of a rugby player said it was a 12-hour day of standing around guarding no one: there weren’t even any athletes there to practice because the waves, were, well there weren’t any. He said the only athletes on site were those in need of a physio visit, namely one young man from California who ultimately had to put his dreams of a sophomore outing at Bells on hold.

My New Part “Eureka”is now Live! Eureka is California’s state Motto and it means a cry of joy or satisfaction when one finds or discovers something. Check my bio for the full clip🕺🎥 @jacobvanderwork . Water footage by @patstacyphoto

“He’s done his knee,” the guard said solemnly of 20-year-old Griffin Colapinto, who had been sporting a brace at Snapper Rocks but still surfed through to the third round before being narrowly eliminated by Hawaiian rookie Seth Moniz. “He had a big chunky brace on it, he didn’t look good,” the guard continued about Griff’s Bells prognosis. In the wee hours of April 18, surf fans – including this reporter- were told to remove him from their Bells fantasy teams: Colapinto was officially out of the contest.

“I got a grade two tear in my MCL about a month and a half ago,” Colapinto said via Instagram, detailing the speedy recovery that saw him at 80 percent wellness by the Quik Pro and feeling about 90 percent normal by his arrival at Bells. “Yesterday I went for my second session since my heat at the Goldy. I felt great! Maybe a little too good. I got too comfortable.”

“About an hour into it I went for an under the lip layback and reinjured it,” the San Clemente native wrote, adding it’s fortunately not worse than the original injury but he’ll be set back a few more weeks, forcing a withdrawal from Bells.

Perusing the event site before the second day of the window, Brazilian WSL Commissioner Renato Hickel visited the coffee stand and was greeted with a cheery, “How ya goin’?” from the barista.

The second day of the window started with a return to Victorian temperatures: the thermometer dropped meteorically from Tuesday’s Fahrenheit reading in the low 80s to a frigid 51 degrees as the call was made to run the contest.