Growing: Fergal Smith Digs In and Gets Back to His Roots

Growing up, he didn’t even know surfers existed. So it should come of no surprise that the existence once-professional surfer Fergal Smith is most comfortable with doesn’t involve dawn patrols in Tahiti but instead involves waking up at sunrise to tend to his organic farm, nearby his family in County Clare, Ireland — and that’s where he finds himself now. Featured in an online series produced by Line9, the second installment of Growing follows him as he tells the story of Holly the Pig as porky, in turn, lends a hand with the yard work. Heartily amused by the most recent episode, I decided to reach out and ask him about his new life. Catching up with him after he came in from a long day out in the field, I had a good conversation with the sustainable farmer about returning home, no longer flying, his close friend and longtime mentor Mickey Smith, and garlic.

What led you back to the land? How did you end up in County Clare?

I suppose I had a flash point moment over three years ago now when I was traveling and surfing these amazing waves. I had an injury on my leg — I couldn’t even walk — so of course my friends went on and I ended up just sitting there for two weeks, thinking about what I wanted to do for the rest of the time I was away. Then I had this moment where I knew exactly what I wanted and needed to do and it wasn’t traveling around having a fun time. I realized I wanted to create positive change in the world. Whatever I did, I wanted it to be good. I didn’t want it to simply be some personal endeavor. I realized the best way to achieve that was to be at home, to do something I enjoy doing. And what I know best is farming which helps my friends, family, and the local area. I would be doing what I do best while also being at home. All these things clicked. That was then, three years ago. So I started altering things slowly, as to not make a drastic change with sponsors and so forth to a point now where I don’t go on any more planes as of a year ago and I grow my own food, and try to teach people by setting up a community garden.

Why is not flying so important to you?

Well, that’s as of last May that I stopped flying, but I don’t know… I suppose it was one summer and I went on 18 to 20 flights in two and a half months — it just doesn’t seem right anymore; it’s all for your personal gain. I guess if you’re looking at the right and wrong, there is no such thing, but there should be a quote on how many flights we should have. We’re just recklessly cruising the world to have fun. I didn’t need to go to Tahiti, Australia or Fiji. It just doesn’t sit right with me. I’d rather be doing something good and positive for the environment we live in rather than just me having a holiday. It’s not that I’m against traveling, it’s one of my favorite things in the world, but not at the expense of the environment. So I instead bought a little sail boat and now sail around Ireland. To be honest, it just makes it more interesting than anything really. 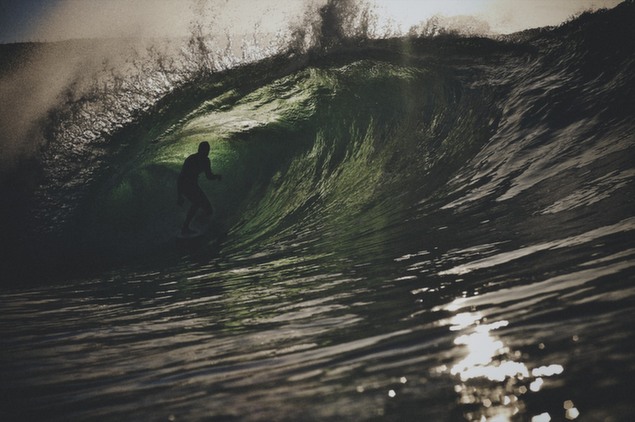 Going back to your childhood, what seeds were sown then that caused you to return today? And how did you first leave to become a professional surfer?

At the very root of it, I’m not a surfer in any way shape or form — my family aren’t surfers. I grew up on a farm growing vegetables, a 45-minute drive from the sea, so I haven’t got any kind of surfing background at all. But my mom would want my dad to get away every now and again and we’d go to Achill Island every weekend in the summer, and that’s how we started surfing. And after a little while of surfing on weekends and getting to know the sea, something really clicked that I wanted to do it. I actually grew up on the hills, walking and camping and doing Scouts. My dad being an organic farmer where he doesn’t spend any money — the most mechanized tool on my farm — that’s the upbringing I have. And in Scouts, the model is: you take nothing but photos and leave nothing but footprints. That’s what I grew up with, that whole mentality. That’s where I came from.

Pro surfing was my goal, but I just wanted to surf and make it my life — I really just love surfing and I want to travel the world and surf amazing waves. Out of that, I got sponsors which got me into the corporate world which I wasn’t used to, I suppose. So everything kind of changed for me, coming from a farming background and getting into the surfing world. I was really lucky, and I’m still really lucky and privileged to have done it, but the whole time — I came home and my dad was up at 6 a.m. and working until 10 at night, making no money. That’s what I know. That’s my upbringing. I’m not saying it’s the better way to live, but it’s what I understand.

Aside from your personal relationship with surf, is there any of what you “understand” in the surf world you were exposed to when sponsored and as a professional? How did you see other surfers?

It’s really funny but me, my brother, and my dad surfed for like five to six years and pretty much didn’t know surfers existed — we knew surfing existed but we didn’t know surfers existed. All of a sudden, I got older and started meeting other surfers and eventually saw there was a whole scene going on. We did it as a getaway from the farm. It didn’t relate anything to my life, it wasn’t anything I was used to — seeing professional surfers who grew up in the surfing scene was so different to what I’m used to. I admired how lucky they were, and it’s cool how good they are at surfing, but I kind of feel lucky that I have the other side: I grew up in a field and got to know the land and learn a lot of natural stuff about the world. Total different way to come at it. It’d be nice to surf all the time, but we can’t live without food and I understand that and have a background in that. I can appreciate the fun and where it brings you and the experiences you have and the people you meet but having that reality and roundedness is good. I came from one end of the spectrum, went to the other, and am coming back. It’s good for me, I need that balance.

Then which people do you respect in the surf world?

The people I admire most in the surfing world when I was younger were mainly body boarders. They’re surfing the gnarliest, heaviest waves in the world, but unpaid, and they’re never going to be paid. They’re the guys that come in the freezing cold to chase heavy waves. And they’re the guys I ended up surfing with all the time. I surfed with amazing surfers, but the body boarders — total no name dudes — turned up and charged the heaviest waves and asked nothing for it. With surf, there’s too much money, and the moment you add money, things change. The same thing would happen in bodyboarding, but at the moment, there is no money in it. The attitude is a nice thing to be around.

How about Mickey Smith? You’ve known him for quite some time now.

Mickey shaped my career, especially his knowledge of heavy waves. When I was about seventeen, sixteen even, I met Mickey in some heavy waves — him taking photos, me surfing. Total normal interaction. He started coming over here [to Ireland] all the time, then he moved over here. He and his bodyboarder friends are chasing these heavy waves and surfers back then were not into that, they kept to the norm. There were certain waves they’d say, “you can’t surf that.”  Mickey would reckon I could. I ended up surfing waves I never even dreamed of. And then between that and being a mentor of sorts, he gave me years of wisdom that I never would’ve known. 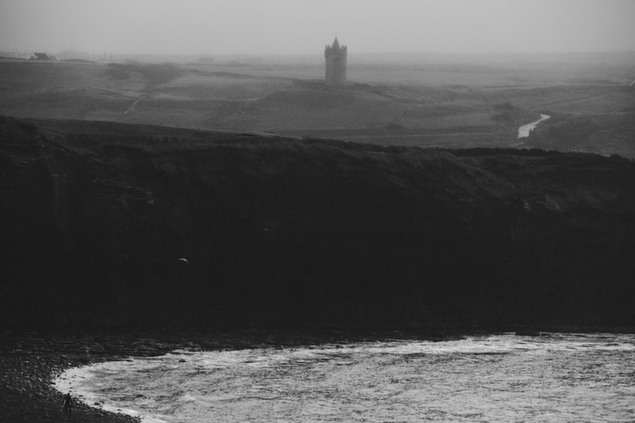 For Smith, home is much bigger than both surf and himself. Photo: Mickey Smith

And Ireland? What is it like seeing your coastline have such a swelling popularity over the years?

I suppose it’s true. Everyone knew there were heavy waves. It was just a matter of time of people catching onto it. Between Mickey taking photos and guys coming cool, there were good vibes. It’s sort of calmed down, but the guys who are really into it are still around. And now my brother is filming. It’s a different dynamic. Surfing in Ireland has matured a bit. We found a lot of waves, but now that stage has passed. It’s just a case of living, really. Swells come and go. Things happen. It’s settled down, and that suits me. I was in that frenzy of new waves and swells and now I’m not as stressed out. I can actually set up a life. Whenever there are no waves, I’m working in the garden. We moved on. But the younger surfers are learning from us, so they don’t have to make the same mistakes. Quite a healthy space, surfing here is at the moment.

Greatest non-farming, non-surfing passions? What else gets you stoked?

Honestly, it’s farming. All last night I was dreaming of digging over a plot of land and planting garlic; I’ve been digging all day and I’ve never felt happier in my life. [Laughs.] Not even a kilometer away, there’s a left hand point and it was sunny and people were asking if I wanted to come for a surf and I’d love nothing more than going for a surf, but right now getting that land turned over and planting some garlic is a much bigger satisfaction. Come July or August, it’ll be a couple thousand cloves that I can give out. To me, that’s more important than a couple extra waves under my belt.

If you’re interested in lending Smith and his community a hand, visit the Moy Hill Community Garden page and donate to the cause. Also, check out our interview with Matt Smith, Fergal’s close friend, who we also spoke to.