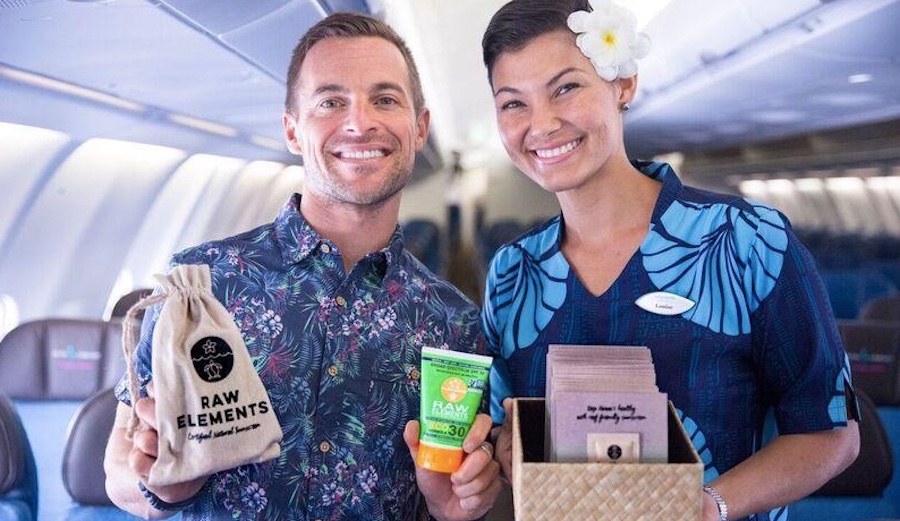 Hawaiian Airlines announced earlier this month that it would distribute samples of reef-safe sunscreen to passengers traveling from North America to the Hawaiian Islands in April to spread awareness about the dangers of non-reef-safe sunblocks.

Every year, upwards of 9 million tourists visit Hawaii by boat or plane to take in its natural beauty, warmth, and sunshine. Many visitors, however, may remain blissfully unaware that mounting evidence suggests commercial sunscreens are damaging coral reefs.

Many commercial sunscreens contain at least one of two chemicals that are harmful to coral reefs – oxybenzone (benzophenone-3), and octinoxate. The sale of many of these sunblocks has already been banned in parts of Europe and Mexico, and a bill to do so in Hawaii was proposed last year but still remains in the state legislature.

Hawaiian Airlines is doing its part to educate travelers on the dangers of sunscreens containing these chemicals.

“We’re excited to announce that we’re the official airline partner of RAW ELEMENTS USA, a certified-natural, chemical-free, reef-safe sun care company dedicated to protecting the environment,” the company said in an April 2nd Facebook post. “In celebration of the partnership, we’ll be offering complimentary samples of Raw Elements’ ‘Eco Formula’ sunscreen to guests on all flights from North America to Hawai‘i this month, along with full-size bottles for purchase at a discounted in-flight price through June.”

The post links to a write-up on Hawaiian Air’s blog that delineates the problem with oxybenzone and octinoxate in greater detail, and why it’s such an important issue in Hawaii.

“An estimated 20,000 people enter the ocean around just the island of Maui every day,” the blog post explains. “If half of those people apply only a 1/2 ounce of sunscreen (less than the recommended amount), between 50-70 gallons of sunscreen wash into the water, one swimmer at a time, on that day. Imagine allowing someone to back a truck up to the beach to dump a barrel of sunscreen in the water. Unthinkable, but person by person, that is what is happening, and just on Maui, on one day.”

One could see how year after year harmful chemicals wouldn’t bode well for the health of Hawaii’s coral reefs.