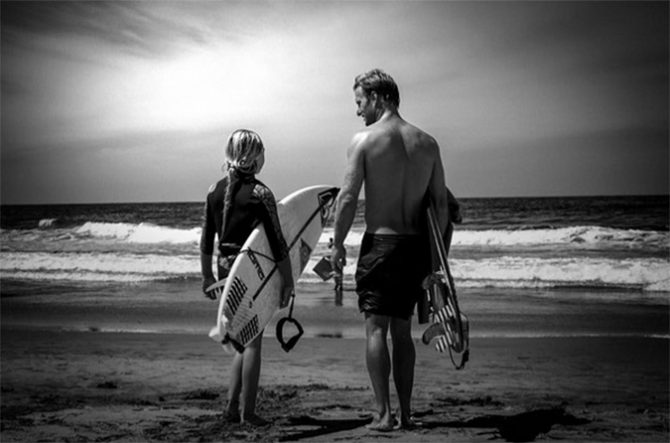 Josh raised his son Colin and daughter Sierra with his wife Nikki while negotiating the CT. Photo: J Bonner

The life of the professional surfer, snowboarder or skier sounds pretty amazing, right? Riding powder in exotic locations, boat trips to far-flung oceans—empty lineups and trackless mountains. But where does real life fit into the dream? As athletes get older, having a family is just a natural progression of the human experience. But how, exactly, do babies, boardbags, and airport check-ins all fit together? Is there room for a small child on the cramped seat in the heli? Does breastfeeding sound plausible as you’re hiking up the skin trail on a film mission? Welcome to our new series, Parenthood, where we hear from professional actions sports athletes who are navigating careers while raising young ones.

Josh Kerr always makes life–let alone surfing–look so easy. And that’s kind of the way it rolled with raising his family on tour. For 11 years, while Josh was on tour and with the help of his wife, he carted little ones around the world. It sounds exhausting but they made it work. Here’s how:

When I met my wife she had a three-year-old son so I stepped right into the deep end of being a dad with Colin. Then my daughter Sierra was born two weeks before my first CT event. So it just really became a part of life and I enjoyed it. It really gives you purpose and motivation for being a professional athlete. You’re not just doing it for yourself but for your family.

And we’ve had so many amazing moments I was so stoked to share with my kids. My son got to see a lot of it as he was getting older and I was on tour until my daughter turned 11. A lot of pro surfers don’t have kids until they get off tour so they never get to see their dad as a pro and in the limelight. To be able to share that with my kids has been so cool.

And as my career moved on, I definitely got better and better at turning off the switch: whatever was going on around an event—whether I was losing, trying to re-qualify, whatever–doesn’t affect them. When I put the jersey on I was just going out and surfing, no matter what, I wouldn’t let it affect my family or vice versa.

My wife, Nikki, was huge in it all and a massive support factor. My competitive career was more nerve-wracking for her. She hated coming down to the event (site) to be there live. But she was a huge supporting factor in what I was doing, she never questioned me. And the kids were funny as I was competing. They were always like, “you better win.” But that was just good motivation. But there was always a lot of good memories coming in from heats and getting a hug from the family after a win.

It wasn’t always easy, though. The first few years, my son was going from Australia to Indonesia to America during different times of the year. I wouldn’t say it was a stable upbringing. Not what a lot of his friends were doing so I was always apologetic towards him. It was a lot to take on, especially when you’re stuck inside a small hotel room in Europe and it’s rainy and cold outside and you have a couple of restless kids bouncing off the walls.

But at the same time, they got to experience a lot more in terms of traveling and adapting to different situations. And you can’t beat learning to surf in a place like Tavarua, one of the most beautiful places on Earth. We kind of dialed it in after a while. Towards the last five years I was on tour we really knew what places worked for us. Instead of sending them (to certain tour stops), when I’d come home we’d jump up to Lake Tahoe or down to Cabo and save money to do those kinds of experiences. It’s much easier to change one ticket instead of four.

Nowadays, it’s more fun, and kind of cool not to be on schedule. I was lucky enough to make a name for myself over the years, so I get to stoke people out at charity events and we have people hosting the whole family. I hate saying no to things like that because you never know when they’ll dry up. We’re really enjoying that part of life as a family.