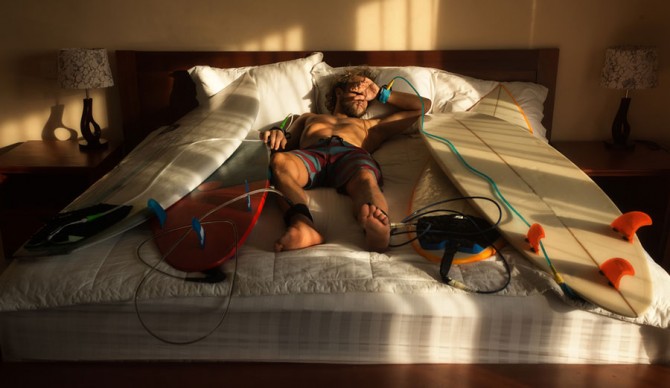 “Honey, the opportunity is yours, so finish your degree and stop wasting our money.” My mother scolded me with that statement as I stumbled through the words to explain why school just wasn’t for me. To prove the underlying importance of finishing my college degree, she enrolled me in something college students like to call “double overload.” Suddenly, I was taking six courses instead of three. I couldn’t reside by the ocean for the rest of my life, I couldn’t be a free surfer and I couldn’t wander the world in “search of myself,” while living out of a stone-built teepee until I was 45, or so she said.

But that’s the dream, Mom.

I was 18 years old and thought I was living on top of the world, free of the expectations and realities society so often throws onto the millennial generation. I didn’t need anybody’s help, especially my own mother. I was my own person and I was the only person who could make myself happy. Of course, that last part is a true statement, but I also thought I didn’t need help getting through the grueling teenage years of grasping these ideas. If I wanted to travel the world, pick up random jobs along the way, locate solid right-hand slabs and fall in love with a free-spirited Australian, so be it. It was my life to live and a mother couldn’t change that.

Or so I thought. She changed my mind, gradually, until I realized my plan might have a speck of imperfection that required a little bit of motherly care.

Skip ahead a few years. I was still a little shithead who wouldn’t listen to a soul. I moved to Australia at 21, (most likely the worst age to move to a foreign country, for obvious reasons), picked up a regular job in Sydney and thought my life was complete. But it wasn’t long before I was calling Mom for an extra $100 more often than I was actually making money myself. I missed my family, my friends, and ultimately missed life in general back in the United States.

Don’t get me wrong, I had a blast. The drinking, partying, surfing and traveling all over the continent will never vanish from my memory. It came down to the fact that I couldn’t do it forever. I didn’t have a backup plan and didn’t want to go back to school, so what were my options? Ultimately, I realized going back to college was going to be my best option.

This isn’t groundbreaking news, but 99.9% of the surfers aren’t a Kelly Slater or a John John Florence-like talent. Those two are part of a rare breed whose talents gave them opportunities they wouldn’t need higher education to gain access to. They fly the globe, paid by the best companies to surf and live a life many of us dream of. But the rest of us aren’t anything like these one-of-a-kind creatures. Traveling the globe and surfing some of the most iconic waves can be done after you make a decent living. From what I learned first hand, it’s just not worth it to travel as a bum now when you can do it like a king in the future.

I’m not just saying your next worldly escape won’t be a puzzle piece in a successful future. But there certainly is value in having that backup plan and of course, being realistic. I was born in Nebraska, moved to California at 18 and started surfing around that time. I learned about study abroad programs and caught the bug to surf the globe by scanning an array of surf magazines. I thought it was all possible, to the point that I stopped being realistic. It was a life of trial and error and I want you, reader, to understand you can diminish some of those errors and turn them into experiences that pull you into the person you truly wish to be.

I still dream of the day I build my makeshift cabin in Coolangatta with my girlfriend by my side. But in the middle of my regular dreaming comes a reminder that there’s much more to the dream than what flashy surf flicks and magazine spreads would have you believe. I’ve worked on my writing and am becoming pretty good at it. I enjoy photography along with the other 12 hobbies I’ve picked up along the way. I’m now a good student who skips the occasional class, and I’ll be graduating in May with a Journalism degree and an English minor.

So was it all worth it? Of course. I did “find myself” while living in another country but not how I had expected. I learned that I do need the help of others to become who and what I want to be. And to this point, I’m no longer following that old dream because new dreams arose in the process. Much of it was thanks to the patience, support, and lessons I learned from the ones I loved. And of course, I will always be passionate about my relationship with the ocean. That’s one thing I know will never change. Surfing slowly made its way into my bloodstream and it’s created a person that is sometimes confusing but always determined. You can say I’ve learned a lot along this journey. From the surf-obsessed teenager who told his mom school just wasn’t for him, to the stubborn young adult who moved to the other side of the globe, the person who soon found himself needing loans from Mom to get by, and eventually the guy who learned why it was important to come back home and rethink the best way to go about accomplishing everything I’d hoped for.

But the most important lesson I took from that dreamy ocean escapade?