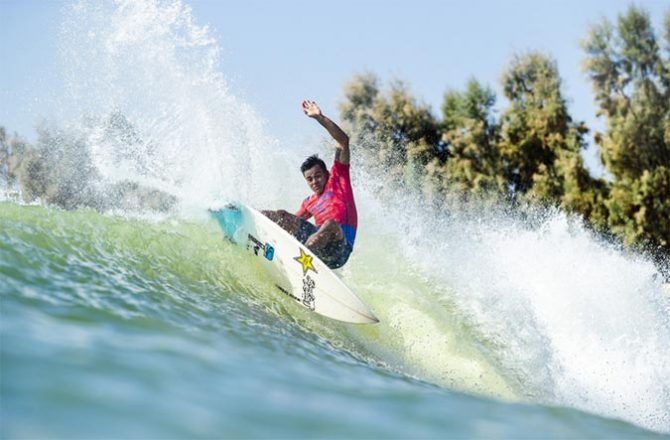 Keanu Asing, getting used to a new environment.

Just finding the Surf Ranch is a bit mind-blowing. Located some 20 miles off California’s I-5 an hour south of Fresno, one navigates the rolling agricultural landscape that John Steinbeck once fell in love with and colored throughout so much of his writing. Massive fields of grape vines and apple orchards are framed by canal banks, surprisingly still full of water. Signs are everywhere–some printed, some handmade–urging people to save California’s precious water in elections this fall. And it’s hot. Really hot.

As you pass the high, brown wooden fence that barricades the world from the Ranch, locals have gotten in on the action, too, erecting lemonade stands and makeshift parking lots right across the street to accommodate the anticipated crowds to come this weekend. It’s all tough to process. And I’m not even surfing in the event so you can imagine how the competitors are still trying to wrap their minds around what they’re seeing and feeling underneath their feet. All with the knowledge that every turn on this man-made beast goes towards their overall standings at the end of the year. So I put my boots to the ground and found out what a handful of them were actually thinking, away from the WSL microphones. 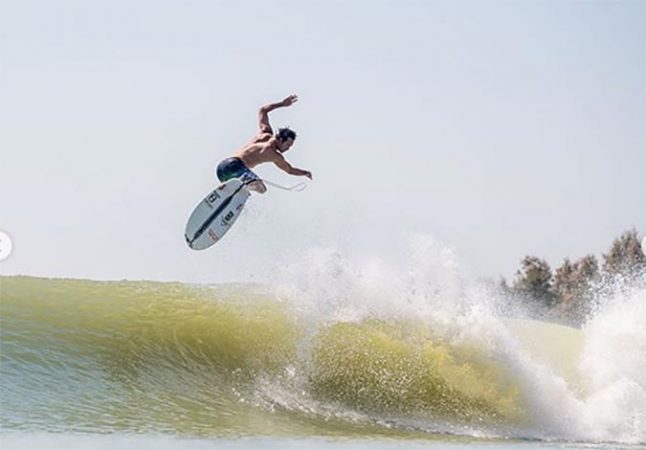 “It’s something everyone’s dreamed of but for me, it’s a bit small. Size equals depth in the barrel. Unfortunately, I’m too tall and big. This is the beginning. Hopefully, in the future we see a slightly bigger wave, that’s my dream. At the end of the day, it’s a two-foot barrel so the difficulty scale is not exactly that high. I believe the public wants to see an air, something futuristic. They’ve already seen somebody get barreled for 15 seconds.

It’s pretty crazy (the points are counting towards the world title). Basically, I’m neither here nor there, I’m in the middle of the road with it. But it means a lot (as far as points go). I’m a part of the WSL, I signed up for that gig and I just have to kind of do whatever they say.

The lack of heat strategy is definitely different. But I don’t think the WSL is here to change how surfing is viewed, it’s just probably to make some money, they can sell tickets, you can put it in an arena, you can get up and personal with the fans, you have people screaming from the sidelines, the pressure builds up. It’s all how you deal with that pressure. It’s a slightly different element. I think it deserves to be 1/10th  of the world tour. If you look at the world champ at the end of the year, 1/10th of his ability needs to be how he performs in this pool. We have waves at Teahupoo, J-Bay, Pipeline, I definitely think it’s worthy to have one event in a wave pool.” 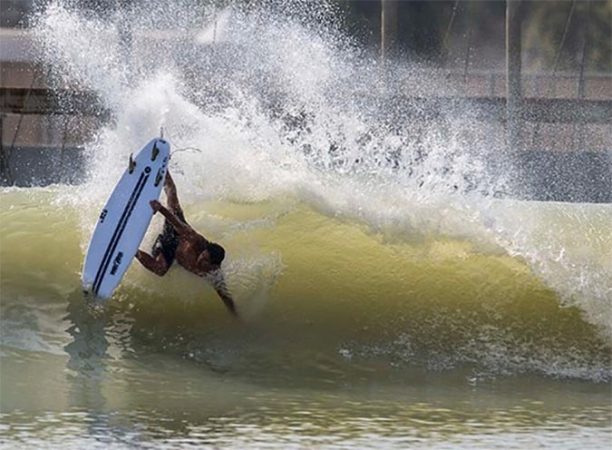 “It’s good, it’s been a credit to the guys putting it on. It’s a good little barrel that’s technical and it’s fun to be out here. It’s great for the first one but I think there’s a lot of room left for improvement.

One-hundred percent, size would definitely improve it. It’s still a pretty small wave. And I totally think they could make it bigger. They made a perfect little two-footer. If they can do that they can go four, six, eight feet. It’s just a matter of how much size, and money, you want to put into it. They’ve done the hardest part. It’s like the iPhone, the one, two, three, the 10, I can’t wait to see Surf Ranch X.

I like not having to scramble for waves. That part’s cool. I don’t like the hassle, although there’s not much hassle anymore on tour. When I started there wasn’t priority, holy shit that was crazy. It’s much better now. In this, the pressure is on you and no one else. There’s no excuses. You blow it, it’s all on you.” 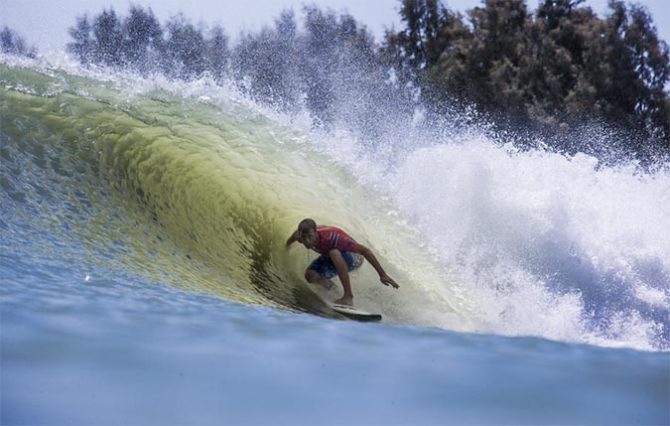 “I think it went a lot better than I thought it was going to go. My waves personally went better than I thought. I had my doubts. I was worried about Filipe and those guys blowing out the scale with airs. The judging has been a little bit up and down. Everyone’s trying to figure it out. It’s hard because it’s the biggest sport of opinion in the world. There’s going to be controversy when it’s man on man, so when you have a 34-man heat it’s going to be amplified.

It’s a little bit early (to have it go towards overall points). A lot of people don’t know the wave as well as others. Kelly’s had more time than anyone and it’s a wave you get better with repetition. Maybe it’s a year or two early but they’ve made the wave plenty accessible to us and if you didn’t come and get your practice in that’s on you.

It feels good if you can bag a score and then you can really let loose and have fun. It’s a really sick wave but I think it’s a touch too long and the judges really cook you for not finishing. That may be in the future, that they can make the wave shorter so we can have a high impact and it forces us to go for it. You’re completely exhausted. Those guys doing airs at the end, that’s really an impressive athletic feat.”

Getting warmed up for the swimming pool event.. cheers 🍻 @wsl 📸 @badboyryry_

“It was interesting watching yesterday. To see everyone go out and surf and not get practice in the morning, a lot were doing good and others were having a few muff-ups. Today was pretty fun.  It’s definitely different not having a warmup (Editor’s Note: Competitors are not allowed a warmup wave before they start). That’s a new thing and it’s cool to see everyone adapt to it.

The really different thing for me is the wave itself. It’s good, but it’s so much different. You can’t go to far to the bottom or you lose too much speed; you go too high and go vertical, you go out the back. With a wave in the ocean you can punch up into the lip and it pushes you forward.  Here, you go out the back.”

Runs 1 and 2 in the books for me today. Board, body, and mind felt really good and I got a few decent numbers on the board. Thanks to everyone who made the trek up here and for all the love from everyone watching from home! Fired up to up my game tomorrow! Vid: @wsl #surfranchpro #wsl #connercoffin #wavepool

“It’s kind of back to the North Shore days out here (laughs). It’s good but it’s hard to find separation between everyone because everyone surfs so well. I laid down a couple waves so I have a base coat, for lack of a better term, and now I can find places to bring my scores up higher.

With strategy, it’s definitely bizarre. So many things you work on going into an event in the ocean are irrelevant here. A couple of big scores have been for airs and it feels like the judges want to see that, but there’s been space for power surfing to get big scores. You really have to go for it and make the barrels count.

It’s so different talking about it like this because it feels so out of context. I guess it would have been cool to do this without the points counting towards the whole year. They did a test event but I was already in Tahiti, but it kind of seems inevitable that this is the future and if it didn’t happen this year it was going to happen, regardless.”

It’s an interesting contest. I’ve never had a contest where you’re scheduled to surf a run and it counts as your total for the end of the year. It’s a lot of pressure and a lot of excitement. Overall it’s pretty cool, but it’s different.

It’s such a different environment. You’re not sitting next to someone using priority. It’s taking away a lot of elements (of strategy). This is a performance-based event.  It makes it more available for fans to understand and watch but there’s a lot of room for improvement. You’re sitting next to a fence, you don’t have to paddle for waves as hard, it’s just such a different environment. I’m really not used to not surfing, either. I’m used to surfing all the time, surfing on the side, or surfing other waves in the area. There’s nothing to surf here, so I’m trying to get used to that. I wish there were other waves to surf here. I’m trying to stay active and just get used to the whole environment.”

For a blow-by-blow of today’s action and results of the preliminary rounds, click here.