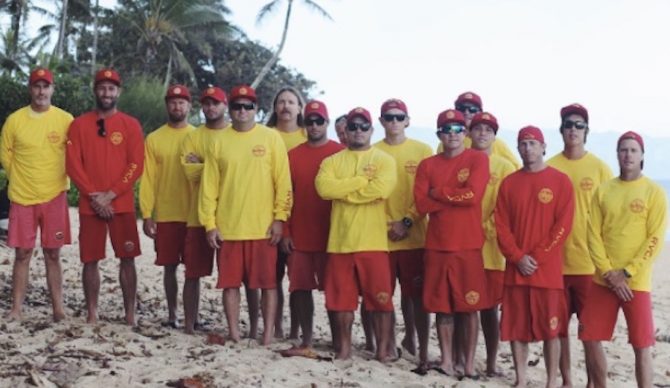 A bill in the Hawaii State Legislature currently threatens the limited liability of lifeguards across the state. Lifeguards are saying that removal of their limited liability protections would impede them from doing their job and cause numerous frivolous liability lawsuits. Photo: North Shore Lifeguards Association/Instagram

The state of Hawaii has been facing a dangerous new threat to ocean safety in the past couple of weeks: greed. A gutted legislative bill is threatening to remove liability protections for lifeguards throughout the islands, leaving the counties open to personal injury lawsuits and forcing some beaches to reconsider even stationing lifeguards due to the risk of litigation if it passes. The surf community has been among the leaders in the call to oppose amendments to the liability protections, but first let’s break down this complicated legal issue to get a sense of what lifeguards and the communities they serve are facing.

As the legislative session nears its late-May close, lawmakers hurriedly began moving languishing bills through the state House and Senate to make the deadline for action. One of those bills was Senate Bill 562, which provides liability protection for lifeguards at all state beaches and is usually extended every few years for continued support of the lifesavers.

This year, government officials and community members alike hoped the protections would be made permanent so the renewal voting process would no longer be necessary for something so obviously beneficial for the community, and that permanence was part of the original bill before it made it to the House Judiciary Committee.

Lawmakers in Hawaii have gutted and replaced language of SB 562 in an effort to remove limited liability protections for lifeguards. These recent amendments will put 90% of Hawaii’s Lifeguards at risk of personal lawsuits, cost taxpayers more dollars and put beachgoers at risk. Personal injury lawyers will be the only ones to benefit from frivolous lawsuits against our lifeguards. Please call or email Scott Nishimoto 808-586-8515 repnishimoto@Capitol.hawaii.gov and Ron Kouchi 808-586-6030 senkouchi@capitol.hawaii.gov to urge them to oppose the recent amendments to SB 562 and leave the liability immunity intact. Please share with family and friends by reposting this image and #PROTECTHAWAIILIFEGUARDS @civilbeat article in our bio for more info.

But thanks to some last minute tinkering in the House (a move known as “gut and replace”), SB 562 got a makeover that only protects lifeguards who work at state beach parks as opposed to all state beaches, and added an amendment saying the Attorney General would defend any lawsuits brought against lifeguards. This move is opposed by all county mayors, all lifeguards, all beachgoers, the state’s Attorney General and all the state’s departments. The gutted House version of SB 562 is supported by only one group: personal injury lawyers.

Firefighters and police officers, both equally selfless in helping others, are protected from liability lawsuits if they are unable to rescue a person during an emergency, save for instances of gross negligence. Liability protection for lifeguards, however, has only been around since 2002, stemming from such frivolous personal injury lawsuits as the one I like to call, “The Story of That Jackass Who Didn’t Know Gravity Works.”

Said jackass decided it would be pretty cool to go to an obviously dangerous jump rock and do a handstand before leaping backwards off the rock toward the water. Not surprisingly, he hit his head on the way down and was unconscious by the time he hit the water. Lifeguards immediately rescued and revived him, saving his life.

Yet the kid’s family still sued the City and County of Honolulu — under whom lifeguards operate in the Department of Emergency Services, which houses the Department of Ocean Safety alongside Emergency Medical Services — for the lifeguards’ “duty to warn” failure. Yes, the lifeguards were being held accountable for not telling the jackass that if he climbs high up on a rock and does a handstand jump off of it into water, there’s a chance he could be injured.

The jury deliberated for only 20 minutes before deciding that the lifeguards were not liable for the jumper’s bad decision because the danger was clearly apparent. But that no-brainer decision cost Honolulu — and state taxpayers — a whopping $500,000 that could have been better spent elsewhere.

“That money that was spent defending and winning that lawsuit could have gone toward putting lifeguards on the beach instead, but it didn’t. The issue here is since this legislation went into effect, the counties [of Honolulu, Maui, Hawai’i, and Kaua’i] haven’t had to defend lawsuits and have been able to expand lifeguard services very significantly in the last 15 years,” explained Jim Howe, a former lifeguard who worked his way up to his current position as Director of Honolulu’s Department of Emergency Services. “The concern is if the liability protection goes away and the counties are back in the position of having to spend money defending all these lawsuits, they won’t be able to put lifeguards out there as our population grows as a state, or provide other public services. There’s only so many tax dollars — where do we want to spend ours?”

The two versions of SB 562 now need to be heard in a conference with representatives from both the House and Senate arguing each side, and if a resolution isn’t reached in the next month the liability protections will simply disappear completely until new legislation can be drafted and introduced all over again.

Questions of liability and legal arguments are already reducing safety measures on state beaches in Hawaii. All lifeguards who spoke to The Inertia for this piece spoke on the condition of anonymity so as not to put their jobs at risk, but several told of instances where questions over what makes the counties least liable for these frivolous lawsuits ultimately led to less provision of services. For example, as one Maui lifeguard explained, “Ka’anapali is one of the most crowded tourist beaches on the island with the hotels over there, but there’s no lifeguards on duty, and we see a lot of deaths.”

Why not station lifeguards at such a crowded and dangerous beach? Much like the 2013 suspension of provision of lifejackets at Hanauma Bay, one of Oahu’s most crowded tourist destinations​ and also a site for hundreds of rescues each year, “the question is: would [the county] be more liable or less liable for putting lifeguards [at Ka’anapali and for providing lifevests at Hanauma]? Lawyers could argue both sides to the end of time,” one Oahu lifeguard explained.

“I know if we didn’t have well-trained lifeguards we’d have a significantly greater amount of rescues here [at Hanauma], a rash of neck and back injuries at Sandy’s, and at Makapu’u probably both,” said Lt. Ron Bregman, who covers Hanauma Bay and occasionally Sandy Beach, one of Oahu’s most dangerous shorebreaks.

As Bregman was being interviewed underneath a lifeguard tower at Hanauma, one of the six guards on duty noticed a snorkler “climbing the ladder,” a distressed swimming style that indicated a swimmer in need. Sprinting down the stairs of the tower, the guard grabbed the rescue surfboard and paddled out to the swimmer, who in her panic was starting to pull her partner who was trying to rescue her down with her. Lifeguards know of this panicked human response and how to keep situations calm — on crowded days at Hanauma Bay these kinds of quick-response rescues can happen 20 times a day.

The threat of personal injury lawsuits is a threat against public safety, and everyone — including the Attorney General, all four county mayors and county councils, every county Fire and Emergency Services Department that provides lifeguards, the State Department of Health and the State Department of Land and Resources — has spoken in support of permanent liability protection.

And in the past week, thanks to a robust social media movement, they’ve been joined by lifeguard associations throughout the islands and as far away as Venice Beach, North Shore Oahu’s Da Hui, Hawaiian UFC champ Max Holloway, and famous watermen like Mark Healey, Kalani Chapman, and Trevor Sven Carlsen, a big wave charger who’s up for two awards at the upcoming WSL Big Wave Awards.

“It’s a perfect example of someone sitting behind a desk crunching numbers trying to see what they can do to increase the bottom line regardless of real world consequences and the lives their poor, selfish decisions affect,” said Carlsen, who served as an Oahu lifeguard for 5 years on the island’s south shore and west side.

“Our community relies on our professional lifeguards here, and they recognize the value they bring to the community and public. Their support reflects the sentiment of our community of how important and appreciated our lifeguards are. I think it’s also a recognition that they have a very difficult job and they are out there every day to do their very best to protect everybody who comes down to beach,” Director Howe said of the outpouring of support. “All the people who are really in charge of these programs that provide access to beaches and safety agrees this is something that should stay in place. It’s an important measure and an important part of law.”

Through the #PROTECTHAWAIILIFEGUARDS social media campaign, community members throughout — and outside of — Hawaii have been encouraged to reach out to Representative Scott Nishimoto and Senator Ron Kouchi and ask them to oppose the amendments and make liability protection for all lifeguards permanent in Hawaii state law. You can join the effort by reaching those legislators here: