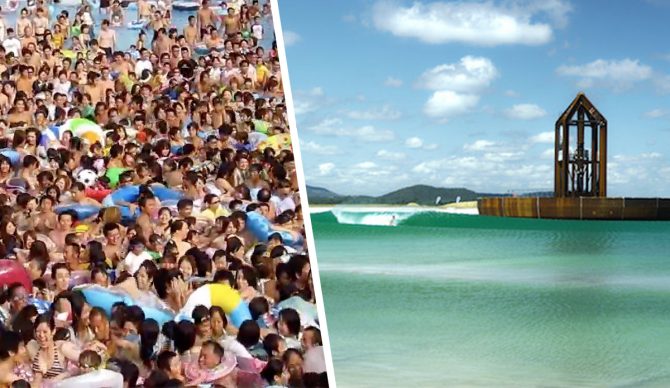 This surf-focused history of wave pools pre-Y2K uncovers the surfable and the non-surfable. Only in surfing would you find a connection between a mad Bavarian king, America’s largest cosmetics company, and pre-Nazi Germany. All three were instrumental in creating wave pools.

In the 1870s, Ludwig II of Bavaria built The Venus Grotto, an underground labyrinth with aquatic passageways, boats and an electrified “wave maker” of which very little is known. The subterranean pool became Ludwig’s place to escape the pressures of kinghood. It’s said that he liked to be rowed around in a golden boat to the relaxing undulation of his machine waves.

This project, along with several storybook building constructions earned him the name, “The Fairytale King.” Ludwig’s eccentricities were mostly tolerated, but then he went off the deep end, so to speak. He met resistance after building a princess castle for “Flight of the Valkyries” composer Wilhelm Wagner. Foes said he was bankrupting the empire with his eccentric designs and soon dubbed him the “Mad King.”

By today’s definitions, he’d be viewed more as eccentric and artsy than chemically imbalanced. When the anti-Ludwig II group took power they circulated the Mad King moniker and it stuck. And to this day, wave pool creators still struggle with the perception they might not quite be playing with a full deck.

1929: The World’s Next Wave Pool Debuted in Munich

A scratchy black and white Pathé newsreel from 1929 shows German bathers splashing in a wave pool. The indoor facility is kitted out with a series of paddles behind a net to push out waves. The clickbait-worthy headline “Indoor Surfers” alludes to visiting Hawaiians on redwood planks. However, there are no true surfers in the clip. Just images of guys in singlets jumping off the high dive.

“No more placid waters for bathers – the mechanism behind the netting keeps everything moving,” says the script. “This is the new kind of swimming bath that is becoming the rage of Germany.”

The pool, located in Munich – home to Eisbach River surfing – disappeared along with most of the city in WWII. Other wave pools of the era included the Gellert Baths facility in Budapest, Hungary and the Empire Pool in London a few years later.

Things were quiet until the 1960s when Japan’s Summerland resort near Tokyo built a wave pool in the glow of the Gidget-era surf craze. The wave pool’s marketing team invited American surfers (as briefly shown in an Encyclopedia of Surfing video) to put on surfing demonstrations for the crowd. Ironically, the pool was and is for swimmers only. Recently it’s become a social media sensation with images of hundreds of people and their floaties undulating like a kelp forest in the surf.

Waikiki Beach at Big Surf in Arizona debuted 50 years ago. Flush with marketing cash from the Clairol company – yes, the makers of Nice’nEasy. Big Surf was born to help promote the “surfer look.”

The wave making machine here works like a giant toilet. Water is pumped into storage tanks behind and above the pool’s deep end. The water is released in sequence to push out a slow-moving closeout.

Designed during the longboard era but opened in the haze of the Morning Of The Earth movement, Big Surf never truly clicked with the surf set. It turned out that hippies don’t like wave pools. Consequently, the park earned its rep in the early days as a local novelty instead of a surfing destination. One of their more popular events included a mid-1980s jet ski comp while today the fun continues each year with a super popular rave.

Despite the sideshow vibe, Big Surf does have a core following of fans who grew up poolside and wistfully reminisce about summers spent at the park. For bonus pop-culture points, the wave pool is also the fictional home of North Shore protagonist Rick Kane.

When Disney Florida developed Polynesian Village in the early 1970s the company also built a sophisticated wave machine. It worked great, pumping out surf across the customized Seven Seas Lagoon. The wave generation came from a device anchored to a small man-made island that sent waves to a nearby beach. Disney had planned to hold surfing “exhibitions” and contests. What they didn’t plan on was the wave action eroding the expensive man-made beaches. The company pulled the plug on the wavemaker and the lake remains surfless to this day.

The Encyclopedia of Surfing estimates that while 500 wave pools were built in the 20th century, none were specifically designed for surfing. Their business model was (and still is to some extent) to get paying floaters through the door with the promise of excitement. Most pools now gently undulate swimmers and their floatation devices in drearily small surf. Sizeable, powerful surf leads to injuries and more importantly, lawsuits.

But some of these pools went on to entertain surfing, most notably the 1985 Allentown Pennsylvania “Inland Surfing Championships.” Australian argonaut Tom Carroll took home the first prize after claiming someone had to win the bastard contest.

Disney Gets It Right With Typhoon Lagoon

The Typhoon Lagoon wave pool opened in Buena Vista, Florida in the late 1980s as part of Disney’s new expansion.

“At the time of Typhoon Lagoon’s construction, the Surf Pool was the largest wave pool in the country,” said a Disney spokesperson. “Before the park opened CEO Michael Eisner called the Typhoon Lagoon Surf Pool, ‘The best surf East of Hawaii.’”

The chlorinated Murphy’s Wave system pumps out one 3-5-foot-wave every 90 seconds, a burgery right and left off the deep end that rushes into a closeout on the inside bar. The 126,000-square-foot wave pool can be rented out for private surfing before and after swimming hours. Due to its proximity to Florida’s surf industry and it’s relative quality of waves, Typhoon Lagoon opened the world’s eyes to what was possible for future wave pools. The USA amateur team trained there and a few paying competitions went down in the deep end during the 1990s. One of which crowned Kelly Slater champ – perhaps seeding the Surf Ranch concept some 20 years later.

Of this later generation of wave pools, the most surf stoked was the Ocean Dome in Miyazaki, Japan which opened in 1993. When cranked up, it pushed out genuine surf-able peaks that rivaled a fun day at your local beach break. The waterpark peaked in popularity in the 1990s with more than a million visitors each year. Park operators put on a show each day with pro surfer Matthew Pitts performing as the surf prince Sabu. The pool was scuttled in 2007 to make room for hotel renovations. Because this chlorinated behemoth was not designed specifically for surfing, recorded sessions here are rare.

Around this same period, Sunway Lagoon opened in Malaysia. It too catered to swimming tourists but also realized the marketing potential of surfing. Red Bull, Rip Curl, and others have used Sunway as a backdrop. Billabong’s Fair Bits has a four-minute segment of Taj Burrow, Joel Parkinson and Trent Munro ripping. The crew employed a jet ski assist system to inject speed into the infant surf generating technology. The pool is swimmer focused like Typhoon Lagoon but does offer surf time before and after business hours.

The infamous Sun City resort in South Africa also hosts a chlorinated wave pool in the center of their waterpark. The wave pool was built post Apartheid as the resort rebranded itself to include activities beyond watching well-paid entertainers and gambling. The Murphys wave system, similar to Sunway Lagoon and Typhoon Lagoon, creates a slow right or left depending on settings.

“It’s like a bunch of toilets that flush in sync and create the wave,” said filmmaker Steven Michelsen. “It takes exactly 2.5 min for all the lion fountainheads to spit water, then finally there appear a few cracks in the wall. Then the lions start spitting and it’s like a giant flushing sound and you know the wave is five seconds from coming out.”

Editor’s Note: This article was originally published by WavePool Magazine.