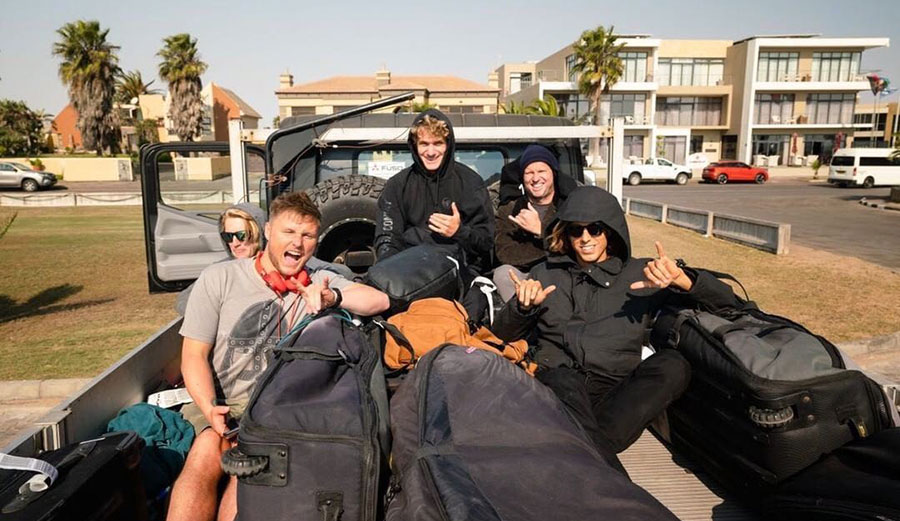 I’ve been patiently waiting for the past five years to surf Skeleton Bay. Every week of the Southern Hemisphere’s winter, I’m checking the charts. As a big-wave surfer hailing from Lahinch, Ireland, Namibia looks like a place of dreams for fast-moving, draining slabs, especially when a swell as big as the one that recently popped up on the radar shows its face.

I waited two days before the swell to book my flights from Ireland to Africa. I didn’t have any budget left from the little sponsorship I have, so I basically used all my savings and borrowed cash from a mate to get me there. I managed to get off work and away I went.

I got into this trip a bit blind. I had no idea how I would get to the wave when I arrived. I just knew I had to get there. I must have messaged 10 guys I knew had been there to see what I needed to do and how I could get a ride on a 4×4 across the desert.

I made it to Johannesburg with no problems, then boarded my flight to Namibia. The two-hour flight went fine until the pilot told us we needed to circle in the air for an hour, which I found unusual because I could see some light fog, but it didn’t look bad at all. Then we were told the flight was being diverted to another city to refuel and wait out the fog. Fast-forward four hours later, and I’m sitting on the plane with very low spirits and my dreams of surfing Skeleton Bay fading very fast.

For some reason, we weren’t allowed to leave the plane and drive to where we needed to get to. We were told we were going to fly back and try to make another attempt. If it didn’t happen, we were going to fly back to Johannesburg. Imagine being on the runway in Namibia – after 30 hours of traveling – and not being able to leave the plane. I overheard some people talking about the airport we were due to fly back into, and it turns out the approach radar system had been turned off due to some disputes with airlines, which would make landing more difficult. We took off to make a final attempt, but as I feared, we were diverted to Johannesburg.

We had to spend the night in Johannesburg and they decided to send us back out in the morning. I woke up feeling deflated and started to look up alternatives to get home penniless and wave-less. I had no idea where my boards were, and there was a 50/50 chance we would make it to our destination. As we took off on our delayed flight, I was super anxious. This was, after all, my absolute last chance to score any bit of swell I’d traveled so far for.

Two hours later, the pilot came over the loudspeaker and announced that we were scheduled to land. I looked around the plane and saw some familiar faces of legends I’ve looked up to for years: Benji Brand, Alex Smith, Gearoid McDaid, Nate Behl, and my all-time hero, Taj Burrow.

I got off my flight and saw that my boards were missing. I was gutted. I had finally made it all the way to Namibia and had nothing to surf on. But just when things looked their darkest, something amazing happened. While we were in baggage claim, Benji offered to let me use one of his boards. Then the group offered to share their ride across the desert with me. A local guy named Paul Lombard picked us up and 40 minutes later, we arrived to see perfect 8-10-foot Skeleton Bay. It was everything I thought it would be.

After a whirlwind two days and 42 hours of traveling, I scored the best waves of my life. That night Frank Solomon and his friend, Ed, let me stay at their apartment and shared a jacket and some pants for the next morning. It’s amazing to see how generous people are. I arrived in Namibia almost broken but left with some of the best rides of my life and a really full heart from the generosity that I was given.

Thanks so much to Gearoid, Frank, Ed, Benji, Koa, Alex and all the Cape Town crew I was lucky enough to meet.

P.S my boards were at the Dublin airport when I got back! YEW!