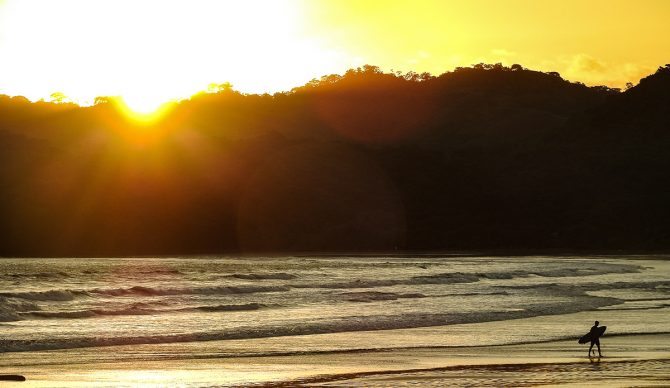 I’ve made surf travel a regular part of my life over the past five years. Like many other surfers, what started with a single trip has snowballed into a career, which now consists of running a study abroad company and travel writing. With the exception of a few far-flung corners of the globe, I thought I had thoroughly covered the basics of surf travel. But when the recent opportunity to travel to Panama presented itself, I realized I had overlooked an idyllic spot. As the southernmost country in Central America, situated just below Costa Rica, the winding Panamanian coastline is exposed to an enormous amount of swell. I was no stranger to Central America but for some odd reason, I had always favored other spots over Panama. So, I set off on a long journey to Playa Venao unsure of what I would find.

Thanks to my frugal travel tendencies, I chose a flight that would have me arriving in Panama City too late to take the shuttle offered by the surf camp I was staying with. That choice left me with the more adventurous taxi and bus rides to the northwest corner of Panama’s Beach Break Surf Camp. Arriving at Playa Venao in the dead of night, I was greeted with a nice note on my room door welcoming me. The long journey to Play Venao made me realize just how remote the location is compared to other popular Central American surf destinations. Nearly six hours from Panama City and 40 minutes to the closest bus station, Playa Venao is truly a secluded wonder.

I had found what I was looking for: a secluded surf break with some type of accommodation and restaurant infrastructure that wasn’t in danger of being overdeveloped and devolving into the next Jaco. While Playa Venao does have a handful of hotels and accompanying restaurants, they’re scattered throughout the long stretch of beach. At its current rate, Playa Venao is growing but is in no danger of becoming a tourist trap anytime soon.

In my first week, I had a few great surf sessions but towards the end of the week, a rare flat spell started to set in. Not uncommon in October for Central America but disappointing nonetheless. However, it was in this flat spell when I was able to truly experience the surf culture in Playa Venao fully, specifically with the family at my surf camp. It began when a group of the camp’s instructors went out fishing to celebrate one of their co-workers last days in Panama. They came back with a literal feast and we were all invited to join. Several beers and an entire, masterfully-prepared fish later, we had changed locations to the bar of the restaurant, before calling it a night late in the evening.

The next few days were filled with slacklining, waterfall hikes, Brazilian Jiu-Jitsu classes, and plenty more beers and laughs.

Prior to my trip to Panama, I had very little knowledge about Jiu-jitsu. All I really knew was that it involved a lot of grappling and that interesting people, like the late Anthony Bourdain and Kelly Slater, were devout practitioners. Needless to say, I was a bit nervous. In the hours leading up to the class, which was actually taught by the camp manager and a Jiu-Jitsu black belt, John Boyle, I spent my time lounging about the camp, reading, writing and attempting to ride some small longboard-worthy waves, trying to not overexert myself before what I saw as an inevitable ass kicking. 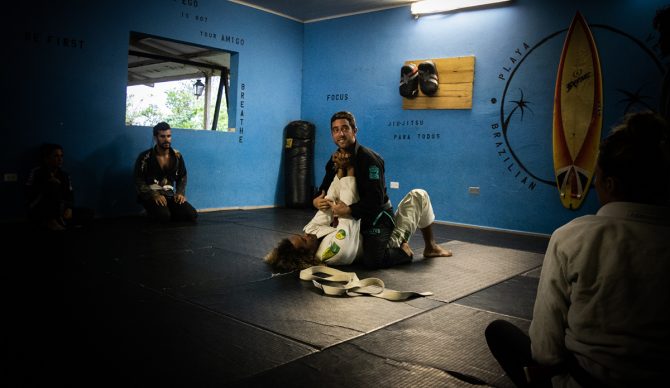 While I made it out of my first training session relatively unscathed, the whole thing wiped me out. The entire hour was one long tortuous lesson in body control, core stability, and overall durability. With hindsight, it’s obvious why so many turn to Jiu-jitsu to better their surfing. Much like surfing, no one starts out good at Jiu-jitsu. There is no beginner’s luck. Overall athleticism, even prior martial arts experience, means nothing. Hours and hours of disciplined training is the only way to improve. Hence the appeal to many skilled surfers.

Immediately after Jiu-jitsu training, the surf picked up and I headed straight for the water, surfboard in tow. This was perhaps the best surf of my entire time in Playa Venao. Not because of the impeccable conditions, but thanks to my performance. Each takeoff seemed natural, each turn organic, and each wave I paddled for proved to be perfectly crafted just for me. The clouds nor the rain that came after could spoil my mood. Nothing ever seems to go wrong when the waves are good. Little did I know the next morning would be even better.

Over the next few days, we witnessed the surf build, increasing in size and perfection as the time passed. Every morning surf was better than the one before it, and every sunset session followed suit. By the time my last week in Playa Venao rolled around, we were faced with a near perfect forecast. The nights were increasingly more enjoyable as well, as everyone at the camp began to come out of their shells. Nights were spent with beers in hand wandering up and down the beach, popping our heads into every nightlife spot that we heard music from or lounging in hammocks back at the camp, exchanging stories till the early hours of the morning. Needless to say, I left Panama completely surfed out and exhausted, excited for my next trip down.