How Andrew Cotton Plans to Surf the Biggest Wave Ever Ridden 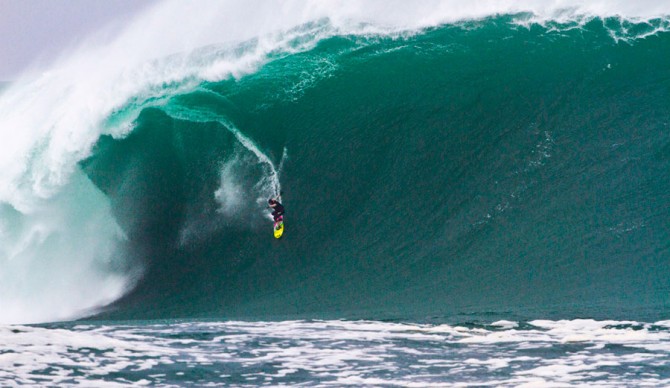 Big wave surfing is definitely something spectacular. To get technical, the waves need to be at least 20 feet tall to classify as “big waves.” But for many athletes in this arena 20 feet is still child’s play. This is where Andrew Cotton comes in – he plans to set the record for the largest wave ever surfed. “I’m always working towards my goals and one is always to surf the biggest wave ever,” he says. “Hopefully, this year I’ll achieve that.” So, who is this man and why are his ambitions set so high?

Andrew Cotton was born in Plymouth, England and grew up on the North Devon coast. This was where he discovered surfing at a very young age. He loved it so much that his father gave him his first board on his seventh birthday and, as he confesses, “I took to it instantly.”

But surfing in the U.K. means a lot of waiting around for waves, the right weather, and the right conditions. “Growing up in the UK, I never surfed loads in the younger days,” he says. “I surfed most summers. It was probably around 14 or 15 when I started surfing all year-round and it started taking over my life.”

By taking over his life he means just that. He started working in a surfboard factory until his mid-twenties. “I’ve always worked hard to support my surfing and tried to tie my work in with my passion. Whether it’s been working in surfboard factories, surf shops or lifeguarding, it’s always maximized my surfing time and never taken me away from the sea or the dream.” But his passion has always remained big wave surfing and putting the U.K. on the surfing map.

Many people don’t know that the U.K. has some of the best surfing spots in Europe. Newquay, Thurso, or Bournemouth are all places where beginners and experts alike can find excellent waves and surfing conditions. What Andrew wants to do is to make these spots, and others more popular to surfers. Maybe this is the reason why he’s still living in the U.K. with his wife, Katy, and his son and daughter.

Aside from Nazaré, Andrew loves surfing Ireland. He calls it a “great destination to go for surf missions, with every type of wave and you never know what you’ll find around the corner.”

What many people don’t know is that Andrew was there, in 2012, when Garrett McNamara set the previous record for the largest wave ever surfed. Andrew surfed his biggest waves there on his lucky board that he still has. He did think it was a wonder that board wasn’t lost in Nazaré that year.

It comes as no surprise that he named McNamara as his biggest inspiration. “I take inspiration from everyone in some form or another, but the biggest influence in my big wave surfing has to be GMac. His big wave approach, his work ethic and his belief that anything is possible if you want it enough. That’s pretty inspiring.”

In spite of all this, Cotton doesn’t like to think of himself as a thrill seeker. “I’ve always just seen myself as a surfer and always felt very comfortable in the ocean. When the waves got bigger, I found it easier to surf.” He is a surfer who loves what he does. He’s a big wave surfer with the goal to surf the biggest wave ever, but he’s also a family man, a husband and a father.

Andrew’s entire family is extremely supportive of him and they, too, are very active people. He says that he just wants his kids to be active. “Sports can be really positive, it doesn’t just have to be surfing”. Andrew admits that he’s away a lot, but “when I’m home I get to spend quality time with my family plus the bonus they get to come with me on some trips! I think they’re stoked.”

So what goes through his mind while he’s surfing those massive waves in Portugal? “Some moments or waves slow down but that’s only the really intense or epic rides. Otherwise I’m just living in the moment, focused on what I want to achieve… “ With all that focus and intensity, you’d think that Andrew Cotton would love to take some time off and relax, but when asked what he liked to do in his spare time to relax, he swiftly stated “I don’t really like to relax,”adding that he’ll wait until he retires.

As for his advice to surfers who want to make a living from their passion: “Work to surf, surf to work,” he says. It’s obvious that he doesn’t take things for granted and knows things come to those who work hard in life.