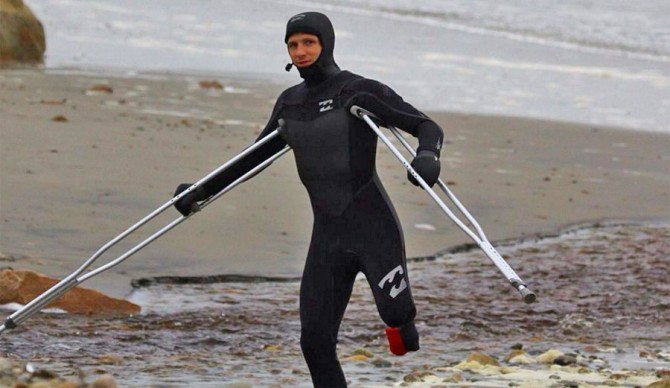 Never give up. Never surrender.

After finishing school in Rhode Island, I moved to the North Shore of Oahu. There I worked at JC Hawaii for several years before opening my own business, building boards for some of Hawaii’s top board manufacturers. I hiked, free dived, and most importantly, I was surfing every day. To most, I was living the surfer’s dream. But on October 9th, 2015, my life changed forever.

It was a beautiful day in Hawaii. Like most days, it started by running across the street to check the surf. The waves looked fun at Leftovers, so I grabbed my board and paddled out. After surfing for nearly two hours, I was sitting on my board waiting to catch another wave, when, out of nowhere, I was struck by a 13-foot tiger shark with the force of what felt like a car collision. When I realized what was happening, the shark had my left leg in its mouth and pulled me off my board and under water. I began fighting for my life, punching its nose and doing everything I could to free myself. I somehow was able to swim to the surface and grab my board. I screamed for help and a very brave and very selfless standup surfer named Keoni Bowthorpe paddled over to me and began to fight off the shark with his paddle. The shark was relentless. It would not stop going after me. Luckily, I was able to get on Keoni’s board and he paddled me to shore. The shark made several attempts to hit us and it did not leave our side until we got to the sand.

When I got to shore, bystanders tied a tourniquet around my leg and called 911. I thought I was going to die. My left leg was gone and my hands were completely mangled. When I finally got in the ambulance, the first thing I did was ask for a cell phone so I could call my mom and dad and tell them what happened. I was rushed to Queens Hospital in Honolulu where doctors were able to save my life. Unfortunately, they had to amputate my left leg, devastatingly above the knee. The doctors spent over four hours sewing my hands back together. I spent a week there getting strong enough to be moved to a rehabilitation hospital.

After leaving Queens, I spent another eight days at the Rehabilitation Hospital of the Pacific. The recovery process was, and still is, quite painful.  I spent three hours each day pushing my body and mind as hard as I could. Fortunately, because I was young and active, I was able to heal quickly and head back to Rhode Island with my parents, where I met with doctors and prosthetists to begin the long and arduous process of getting fit for a prosthetic leg. My body was healing quickly, but the pain was unbearable. I suffered from a severe case of phantom limb pain. My left foot and leg were missing, but the pain there was excruciating.

I started working with a company in Rhode Island that took a mold of my leg for a socket to fit my residual limb. Putting the leg on for the first time was hard. I never anticipated how difficult and painful the process would be. It was emotionally difficult to put the hard-restraining socket over my leg. The first thing I thought was, “I am never going to surf again. My life is over.” The prosthetic felt nothing like a normal leg. It was so unnatural and uncomfortable. I thought it would be impossible to use. I couldn’t wear it for more than 15 minutes at a time, and I truly thought I would never be able to walk again. But I knew I couldn’t lose hope.

People ask me all the time if I’m scared of getting back in the water….. I’d be lying if I said I wasn’t a little nervous the first time, but I will not let this define who I am or what I do.

I started doing research online to find out if what I was going through was normal. My mom found a video of an above-the-knee amputee snowboarder, who gave us a lot of great information. We discovered the pain I was feeling was not normal, and he told us that we had to get in contact with Stan Patterson at Prosthetic and Orthotic Associates (POA) down in Orlando, Florida. Stan was a master prosthetist who built amazing vacuum sockets.

The following week I was on a plane to Florida. Over the next seven days, the crew at POA worked their magic. It was extremely powerful to meet and befriend all of the other amputees at the facility. Their stories inspired me and motivated me to keep my head up. I worked tirelessly at learning how to walk again. My new socket felt like it was starting to fit without hurting my leg. It was incredible taking my first couple of steps without the crutches under my arms! I could start to see the light at the end of the tunnel. 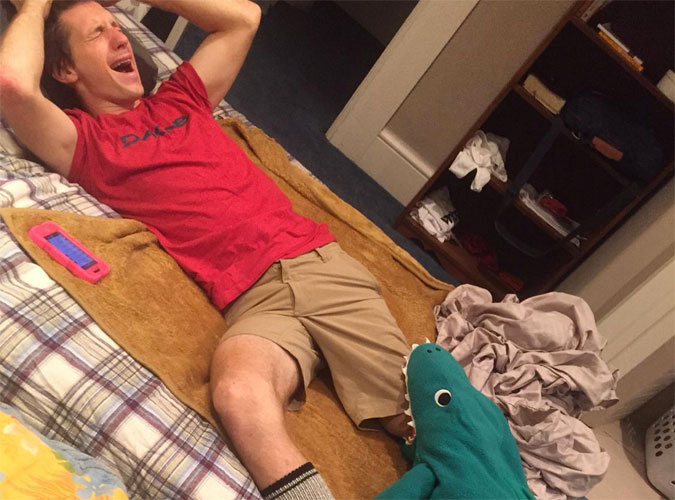 A true warrior making light in the face of adversity.

My main worry was finding a prosthetic that I could use for surfing. I researched every prosthetic company and contacted the very few above-the-knee amputee surfers that have bravely tackled this seemingly impossible task. After months of searching for a surf leg, I had found nothing and soon realized that there probably was no surf leg out there. Therefore, I decided to design my own. Two of my very good friends are masters in the composite industry. I knew what I wanted the leg to do and they knew how to make it. We are currently spending countless hours building a carbon fiber surf leg and we’re making incredible progress.

Throughout my journey I’ve been blessed by meeting and talking to people all around the world who have inspired me to keep my head up and keep fighting. One of the bigger blessings in my road to recovery has been from an energy nutrition bar company, Carve. I was lucky enough to have been given the opportunity to use their bars for clean healthy energy while I continued to heal. With every bar sold on their website, Carve Bar gives the customer a chance to donate $1.00 to my new surf leg. The response thus far has been unimaginable.

Ultimately, I want to push adaptive and amputee surfing to new heights. I want to surf as best as I can with the cards I’ve been dealt. I wish to live more on one leg than I did with two. And if I’ve inspired just person in that journey, well, then, I’ve done my job.