How Many Waves Do You Have Left in Your Lifetime? 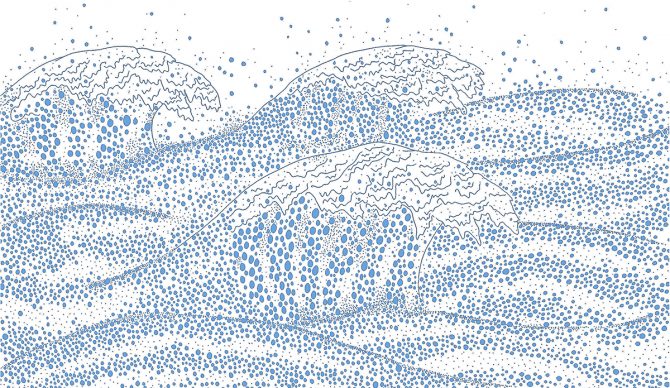 The Wave above is made from 5,200 circles, one for each week of a human life.

How many waves do you have left in your lifetime? Let’s call our average reader of The Inertia Tim. He’s fortunate enough to live close to the ocean, his 35th birthday was last week, and he’s in good shape but he really feels it after some of those longer sessions. Like most surfers, he made several fairly major life decisions that kept him tethered to the ocean and carves out time salty as often as possible. At this point in his life, that averages out to about one surf session per week during the winter months.

On average, Tim catches 8–10 waves per session. In the summer months, the waves aren’t as consistent so he sneaks away for one 10-day surfari if he can negotiate the time off. Tim avoids any major injuries (not that it would hold him back) and as the years pass him by, he’s not quite in the same league as Don Wildman, but he stays in good shape, keeps a board with plenty of volume, and he’s able to paddle out back well into his late 70’s.

Okay, so a generous back-of-the-napkin calculation for Tim’s weekly surf, catching nine waves per session for 28 weeks each year for the next 50 years shows that he’ll ride about 12,600 more waves in his lifetime. Some lucky or younger groms might get more, and other more land-locked readers might have their numbers in triple digits.

We all have a limited amount of time remaining on this planet. We are all visitors here. Talking about death is still mostly taboo in western cultures. I think this needs to change. According to FlowingData, a 27-year-old male has a 5% chance of dying before he reaches 50 years old. 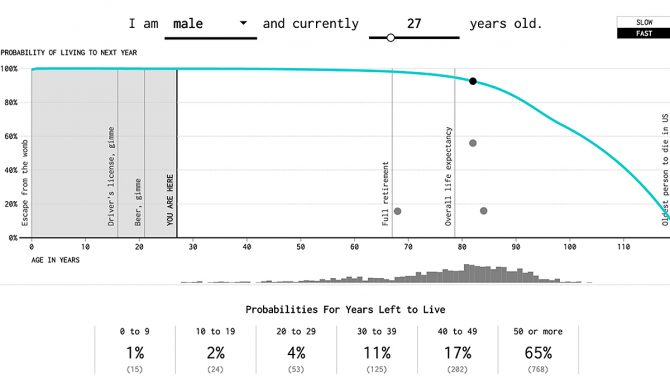 One of the few certainties in life (a cryogenics breakthrough notwithstanding) is that we will all someday pass away. When this happens, the elaborate tapestry of priorities that we’ve spent decades weaving combusts literally into stardust. One day, a wave we kick out of will truly be our last. Intellectually we know this, but unless we experience a near death experience (perhaps a brutal three-wave hold down), lose a loved one, or consciously reflect on the limited number of days that we have remaining, it doesn’t really cross our mind. In fact, as default optimists, we all tend to imagine the future as if it will occur with complete certainty. The idea that one day we will no longer be here as a conscious, feeling, breathing being is not something that we spend much mental energy contemplating. Shortly before being claimed by the ocean himself, Jay Moriarity shared these wise words:

Jay Moriarity – Appreciate it from Jonny Miller on Vimeo.

As surfers, we are generally better than most at appreciating the wonders of life and living in the present. Most of us have had moments when we have been soaked in wonder or feeling as Matt Smith put it, “the simple satisfaction of our own mortality.” But we’ve all been in crowded lineups watching other surfers bicker and thought “wow, you’ve really lost perspective.”  We get frustrated with missing a set wave or making less than generous assumptions about the guy who accidentally dropped in on us. We’re human and there are always going to be times when we lose sight of the bigger picture. That said, I can’t help but feel that when we feel a lack of stoke it’s really just lack of perspective.

Editor’s Note: The author’s 52,000 dots wave image is a nod to Tim Urban’s Your Life in Weeks wall chart, adapted for those of us who love the ocean. The wave itself is made up of five thousand two hundred circles, so assuming that you get to live to be 100, you have one empty circle for each week of your life. You can buy a print of the blank 5,200 dot wave here.