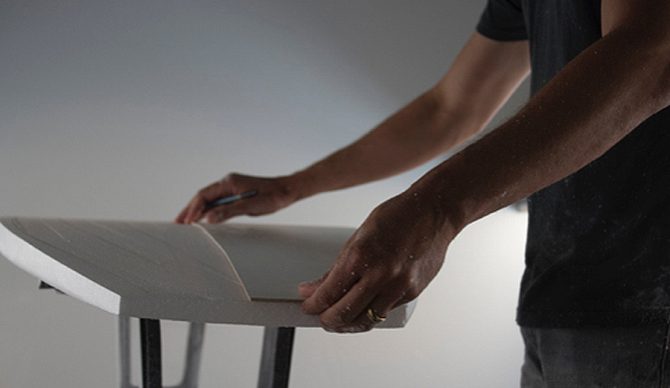 Mark Sarinana, founder of Surfboards from Mars, traces the outline of a custom board in Carlsbad, CA. Photo by Marie Targonski-O’Brien.

Mark Sarinana leans over an elevated piece of recycled foam, tracing the outline of what will soon become his newest custom surfboard. Bright fluorescent lights reflect off the surrounding white walls of Sarinana’s shed in Carlsbad, California, where he shapes sustainable surfboards for his small business, Surfboards from Mars.

“I always wanted to give back to the environment and ocean which has given me so much,” he says. After less than a year of shaping, Sarinana started thinking about the materials his boards were made from.
“I wanted to build a board that had the least environmental impact possible but still performed well,” he says. “Once I started shaping Ecoboards and saw how they performed, I decided that was the only way I wanted to make boards.”

Surfing’s inherent connection to the natural world may seem like an obvious space for sustainability in the sport, but the industry has become inundated with boards, waxes, and wetsuits created from toxic and harmful materials. In many ways, surf culture has been commodified and the sport is now driven by a million dollar industry where big companies focus on profits. However, some companies are working to break the cycle and retrace the roots of what surfing is really about: humbling yourself in nature.

Ecoboards, created by Sustainable Surf, a non-profit in Manhattan Beach, is a third party verification system that works with board makers around the world. The organization ensures boards are made from sustainable materials that reduce environmental impact and produce a significantly smaller carbon footprint. Using a two-part verification system, founders Michael Stewart and Kevin Whilden want to encourage surfers to re-incorporate sustainable practices into surf culture.

Sarinana, who has been surfing for 20 years, is in good company with pro surfers like Kelly Slater, Lakey Peterson, and Stu Kennedy, who have all embraced Ecoboards and helped counter the stereotype that the boards lack performance capabilities.

“The reputation is slowly changing,” Sarinana says. “You can still rip on these boards. I want to show people that you don’t have to sacrifice quality but it’s been a slow process.”

While it’s easy for most of us to ignore the environmental impact of our weekly commutes to work or daily consumption of to go coffee, the routine of surfing forces a connection to the natural world. For a few hours every day, surfers are fully immersed in the vastness of the ocean, where they can be embraced by the environment without distraction.

Sergio Costa, co-owner of Sliver Eco Surfboards, would like to see surfers’ relationship with nature continue after they step foot back on land, especially those who play a role in the creation of surf products.
“All the surf companies have a responsibility to implement ecological solutions,” Costa says. “It’s all about facing the future, respecting human values and preserving our planet.”

He believes companies set a precedent for consumer trends, especially in a multimillion dollar industry like surfing, where the impact of a single purchase adds up quickly.

“For some giants, the cost of manufacturing and the margin of profit are more important than the tons of toxic waste left in our oceans every year,” he says. “Those giant surf brands that sponsor professional surfers and surf competitions have a huge influence on consumers’ minds.”

Sliver Eco Surfboards, based in the Canary Islands, was recently the first board-making company in Europe to receive the highest level of sustainable verification from Ecoboards for their wooden surfboards. The acknowledgment of Ecoboards doesn’t fall short for shapers like Costa and Sarinana. “For us, it means we are in the right track and it gives us the motivation to keep working towards the future,” Costa says.

But shapers aren’t the only people in the industry focused on sustainability. Luise Grossmann, co-founder of Five Oceans, a company that makes fins from recycled trash from Indonesia, says surfers need to start thinking about how they can lead more sustainable lifestyles.

“As surfers, we are surely more connected to the oceans,” Grossmann says. “But this also means we should take more responsibility.”

“Surf gear is made using the most toxic materials. So, we reckon it’s time for a change and that we come up with ideas that make the world a little bit better.”

For Grossman, that means acknowledging the influence surf culture has on the rest of the population, even those who live inland. “We can only lead by example, practice what we preach and be the best eco-ocean-enthusiasts we can be,” Grossman said.

For Sarinana, who only started shaping boards three years ago, it’s all about the small choices people make. He pulls his face mask down around his neck as white residue from recycled foam falls down around him. “There are so many people that don’t pay attention,” he says. “Every little bit helps. This is something that I can put out there. It might not be much but it’s something.”