I Almost Died In Surf Way Beyond My Skill Level, But I Did Learn a Few Things 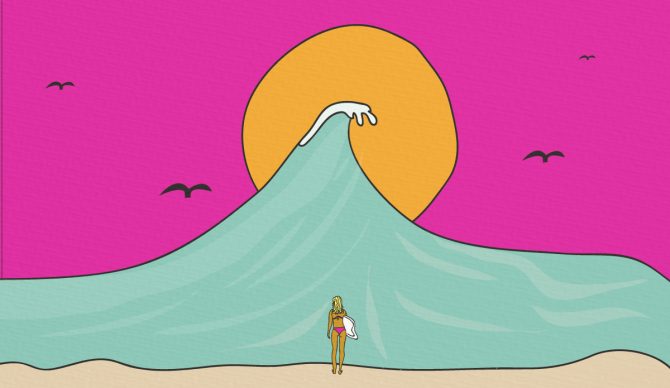 Sometimes you have to learn the hard way, as our writer, Kathryn Romeyn, shares. Art: George Mussell for The Inertia

The closest I’ve come to dying was at Occy’s Left. It was the day I turned 33 and a reality TV star was named President of the United States of America. I’ll never forget it.

I’m not someone with multiple near-death experiences under my belt. And maybe this wouldn’t have phased other people. But to me, a lifelong water lover, ex–teenage synchronized swimmer (ha!), world traveler, and fairly inexperienced surfer, it was an important moment. In fact, in retrospect, it was pivotal. What I learned about myself and about the ocean has informed my every move since.

I’m by no means a person who has any business surfing Occy’s Left, the barreling private reef break in front of Indonesia’s luxury surf resort Nihi Sumba. It’s way beyond my pay grade—still is now, after far more surfing in the last year and a half than I’d done up to that point. But I had to try to know that.

There, just 10 surfers per day are allowed slots in the lineup—for $100 per head. That arrangement in itself merits further scrutiny. We’ll do that another day. I’d never been anywhere as serious; the largest waves I’d surfed on my own at that point were maybe waist high. But it was my birthday. And don’t we all do stupid things on our birthdays?

On that day I was devastated about the election results (I’d love to blame Trump for what was to come, but he’s kind of off the hook on this one). I needed a distraction. I also craved some way to make my birthday exciting. Memorable. I’d intended to surf other mellower spots around Sumba, but there was some kind of ban in place that month. And, if I’m being honest—and this is the most embarrassing part—I was hoping to tell people, “I surfed Occy’s.” Big mistake. Or, if you’re someone who looks at failures as major opportunities for growth, lesson number one: Don’t paddle out (or in this case, hop on a Zodiac for the first time, because the surf was too heavy to get out) with delusions of grandeur and bragging rights. It’s the worst mentality. I learned the hard way to know my limits, and not be a goddamn fool.

I even took a photo of the chalkboard that listed conditions, but apparently paid no attention. “Size: 5-9 ft. Swell slowly declining, still lots of energy, size and power.” Lesson two I now know: Observe for a while, study the wave, see what other guys are doing on it, and judge, intelligently, whether or not it’s appropriate for my dubious skills before getting in the water. I remember someone in the Boathouse asking if I’m a strong swimmer (I am, fortunately), and off I went into the boat with a friendly Balinese surf guide, heart pounding with anticipation of what was to come, and hoping for an ounce of glory.

By the grace of some surf god—and the great wave selection of my guide—I did get one wave, which sent me over the moon. Pure magic. I went for a second, a nose-dive dropped me right in the impact zone. I made my way to the surface, repositioning my bikini and wiping my contact-lensed eyes just in time to turn around and face the most imposing wall of water I’d ever seen in real life. (Another lesson: Always be aware of what’s coming.) In that moment I was pretty certain it was a tsunami wave. In reality, it was something new to me: a cleanup set.

Before I could blink or, more importantly, take a breath, it hit me. The power of the wave blasted my eyelids open, disrobed me and sent me tumbling like jeans in a washing machine. The shock was so great I took a deep breath—of water. I fought my way to the surface, sputtering and coughing, just as the second one came (again didn’t see it), sending me breathless, once again, back into the blue where I wondered if I would drown as the water threw me around. Rinse, repeat. I actually tried to yell “help” when I surfaced, but could barely speak or breathe, removing my leash as I coughed up water, and swimming toward my guide in the channel where I collapsed on his board and managed to cough, “Done.”

Back on land, I swallowed some Pocari Sweat—the cure-all here, I guess—and coughed some more as I thought, “Holy shit, I could have just died.” The next revelation was a surprise. I understood, decisively, that I’m not a surfer (and gained new appreciation for what surfers can, incredibly, do), but that I would really, really like to be. One day. I wanted to be a super graceful longboarder, for whom cross-stepping down the board might someday feel semi-natural. Who has control over her board both when riding it and in the face of what my instincts would tell me was sure disaster. Someone who knows her limits, and makes the most of each achingly-beautiful curl of saltwater.

I was super freaked out, but I wasn’t afraid. Instead of fearing the water, I immediately wanted to—and did—head to a more manageable wave on Lombok to work on the billions of things that I now understood I needed to work on. I realized I’m resilient, and discovered much more peace in the ocean than I’d ever felt before. I think it came from learning the most important lesson: Respect. Mother Nature is unpredictable, breathtaking, and powerful beyond belief. Sometimes it just takes being on the wrong side of a clean-up set to fully appreciate that.