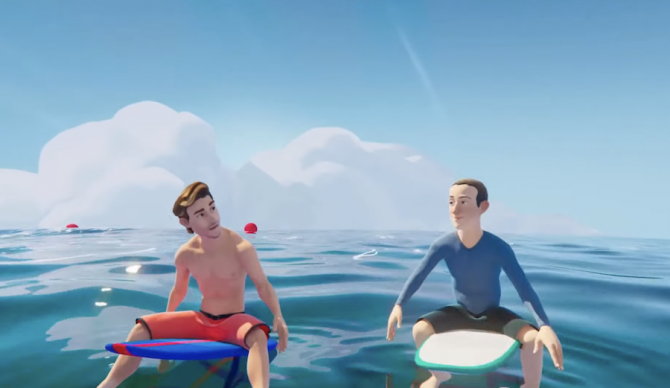 Mark Zuckerberg has spawned the Metaverse – a virtual world for humanity to populate, exist, and interact – believing that we will all want to eventually embrace the digital world much more than our own. Considering that humans have done such a thorough job of making the real world an unbearable shitstorm, it makes some sense that they would want to temporarily retreat elsewhere. But the Metaverse aims to be the preferred reality, not just temporary. Good to know the architect helming our all-virtual future is Zuckerberg – the man best known for creating a website that excels at turning your aunt into a grammar-challenged Nazi.

This is the dystopian future that Sci-Fi films from the eighties and nineties tried to warn us about. The mere concept of the Metaverse should be covered in cement, locked in a nondescript box, and hauled off to a secret government warehouse in the middle of nowhere guarded by TOP MEN.

But this is 2022, where only the worst ideas prosper. And Zuckerberg is pouring billions of dollars into the Metaverse because he’s afraid of Tik-Tok. So, it’s not just going to succeed – it will thrive. Time to crack open that Ark, baby.

And look what we have here – Meta already figured out a way to cram surfing into this mess (okay, foil surfing, but still). Great – because people donning VR headsets and bumbling around their living rooms trying to surf is exactly what we need. I can’t wait to discover new ways to suck at surfing in the Metaverse. One minute, I’m cruising down a cyber wave, the next I’m stumbling over my couch and into an unsuspecting house plant while trying to get Meta-pitted. I can’t wait to be covered in succulent and shame!

Because Marky Mark is at the wheel here, that means we are all aboard the train to monetization station. It’s not going to stop at some Metaverse-looking VR game. Oh no – there will likely be an entire surfing universe for you to wander around and spend real-life money on. So little virtual you, fresh off a VR surf sesh, will wander down to the virtual Rip Curl store where a virtual Mick Fanning will sell you virtual boardshorts for your virtual character. You will spend real money on these boardshorts. Rip Curl boardshorts you actually will never wear. A mirage indeed.

Nobody asked for this. No one wants a world where surf brands can peddle digital wares, the outside world can be largely ignored, and we are supposed to get more hyped for surfing in our living rooms than the real thing. But this seems to be our new course. You would think that nothing could replace the feeling of catching a perfect peeling wave with warm summer rays beating down on your face. And yet, here’s Zuckerberg trying his best, aiming to make the real world mean nothing and the digital mean everything. It’s not quite a supervillain blocking out the sun, but it’s damn close.

I keep wondering if there’s any benefit of a Tron-meets-World-of-Warcraft-meets-surfing universe. Maybe the tech will develop to the point you could throw on some headgear and surf a realistic-feeling Pipeline. Or maybe enough surfers get sucked into computer-generated surfing that our real-world breaks become emptier. Or this might provide access to surfing for people that could not otherwise physically do so.

But, come on man, this is Mark Zuckerberg we’re talking about here. This only ends one way – and it’s not good. His team is more likely to program the Metaverse to allow six Boomers from Nebraska to snake your 3D-generated wave than they are to do anything net positive for society.

Kai Lenny – if you’re out there and reading this – you need to listen to me. Talk to your boy Zucks. Tell him that it would be an infinitely better idea to go foiling through a pool of small children than to create something as astronomically pathetic and meaningless as the Metaverse. Or trap him in a vat of sunscreen so he can be kept away from the rest of society. There’s an argument to made that he’s already ruined the real world – he doesn’t need to create an entire, even-more heinous virtual one.