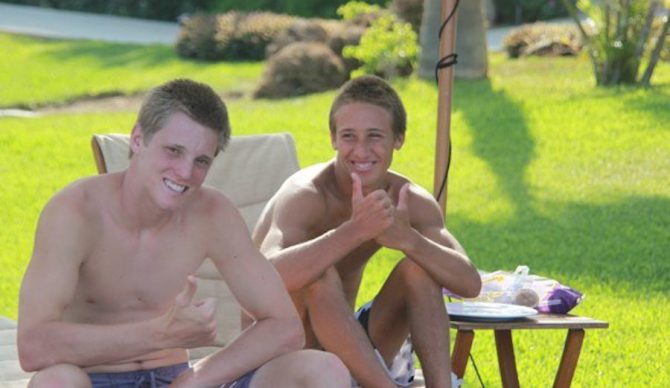 Friendships are only truly tested when you accidentally shit in someone’s wetsuit and continue to be friends.

Unfortunately (or perhaps fortunately) there are moments in life you can never live down. A little over a year ago I married my best friend, the most incredible woman in the world. As is typical with nuptial celebrations, our rehearsal dinner was a gathering of close friends and family. A handful of our invited guests got up and told stories – mostly embarrassing ones – about either Kelly, myself, or the both of us. I expected one of my groomsman, Garrett, to stand up and drop the grandaddy of them all. Worse than any nude baby photos your mom can show your new girlfriend during their first encounter. And even worse still than the story about your first keg stand when you immediately threw up, and your buddy who was just looking out quickly grabbed some cologne and sprayed it in your mouth. No, Garrett had the power to drop the hammer – the time when we were kids when he lent me his wetsuit. And what did I do? I shit in it.

Garrett spared me that day. But somehow it came up here in The Inertia offices last week. After some prying, I begrudgingly accepted the opportunity to tell my side – immortalizing the story in digital. So here it goes.

It was an overcast day. Summertime, if I recall. But early summer. The water was chilly but not frigid in Southern California. My brother and a group of his friends were spending the weekend camping out of an RV a friend’s parents had rented to celebrate their kid’s birthday at San Onofre State Beach – an area referred to as Trails. My brother was probably 8 then. And I was 11.

The kids were surfing in the morning, parents grilled up hot dogs in the afternoon, and the kids would hit the water again once the wind died down.

So as not to leave the siblings of invitees out of the mix, the parent chaperones told the other parents to come join everyone at the beach for the day. And my mom cooked up a plan where my best friend Garrett and I would go down and surf with my brother and all his friends.

When we arrived, I realized I had forgotten my wetsuit. Our neighbors who planned to join us hadn’t left their house yet, so we called and asked if they wouldn’t mind essentially breaking into our garage and grabbing my suit. About an hour and a half later they arrived, but had grabbed my brother’s other wetsuit by mistake.

We were psyched. After a small hitch in the giddy up, we went back to being a couple of frothy groms ready to surf a little pulse of south swell with only a few people out.

The water was clear. The waves weren’t amazing, but still fun. Much better than being in school, anyway. And the crowd was minimal.

After an hour, we decided to head back to get some food. 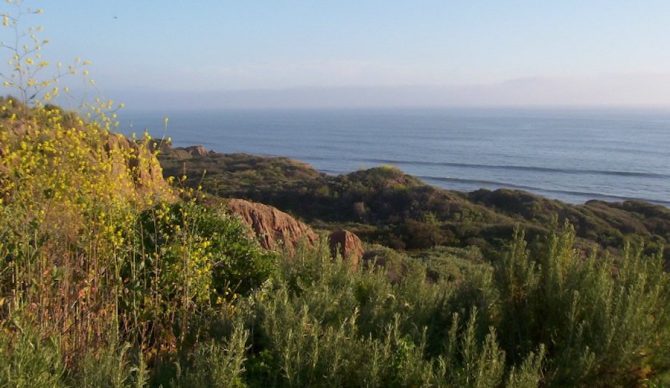 The trails of San Onofre are a beautiful place to hike, camp, and surf. But inconvenient if you need to take a dump…bad.

Trails gets its name from the numerous trail heads that you take from the top of a bluff down to the beach. So when you surf Trails, you really surf trail 1, or 2, and so on. Camp sites line the bluff, but don’t exactly offer an ocean view. And to call it camping is generous. It’s basically a paved road/parking lot. You park your car in front of an 8′ wide patch of dirt, so you end up pitching a tent between your car and this natural berm.

While climbing the trail back to the RV, my stomach dropped. I had to go. Garrett was behind me while I quickened my pace.

By then I wasn’t thinking logically. I didn’t know what I was going to do, all I knew was I had to get back to civilization. Maybe there was a restroom up top, but I couldn’t be sure.

Once I got to the top of the bluff I sprinted along campsites. Between one group and the next I spotted a structure. A dad was telling his daughter to get all the sand off her feet in the shower. A blue circle with a white triangle and two silhouette male and female icons marked salvation. I ran faster. Clenched. I got to the door and it was locked. I banged on the door. “Yah!” someone shouted from inside. There were two more doors, all locked. I was exasperated.

If there was a structure like this here, there had to be another a few campsites down. I sprinted. Garrett was football fields behind me at this point. I imagine he could barely see me if he squinted banging on doors, shouting like a wild man.

When I got to the next little building I tried the first door, locked. I spun around to the other side, the first door opened. I dropped my board, no time to set it down gracefully, and started to wiggle out of my wetsuit. I had been clenching so hard the whole time, baring down my top teeth on my bottom lip that it left indentations. That brief moment of ecstasy, of hope, when I ripped the door ajar was heavenly. I let my guard down.

When I finally managed to sit down and relieve myself, I noticed something. Shit in the wetsuit.

As it happened, this little structure was right by the campsite my brother, his friends, and my family were occupying for the day. I opened the door a crack and signaled for my mom. She walked over.

“I think I shit in Garrett’s wetsuit,” I whispered. She started busting up laughing. She couldn’t believe it.

She offered to grab me some clothes and take the wetsuit to the shower and rinse it. When the opportunity to go surfing later that day arose, my mom and I managed to convince everyone it wouldn’t be good. We took the suit home, washed it with soap, and returned it to Garrett.

It wasn’t until we went surfing again a week or so later that I told him. “Dude. Remember Trails last week? Well, uh. I shit in your wetsuit.” He grimaced. “But we cleaned it out with soap!”

Beyond that first reaction, Garrett wasn’t too phased by it. He went on to wear the suit again, and every time we surfed together I was reminded about how shitty of a friend I was. We joke about it now from time to time. But I’m still glad he didn’t tell that story at my wedding.