I Surfed in Europe During Lockdown; It Wasn’t What I Expected 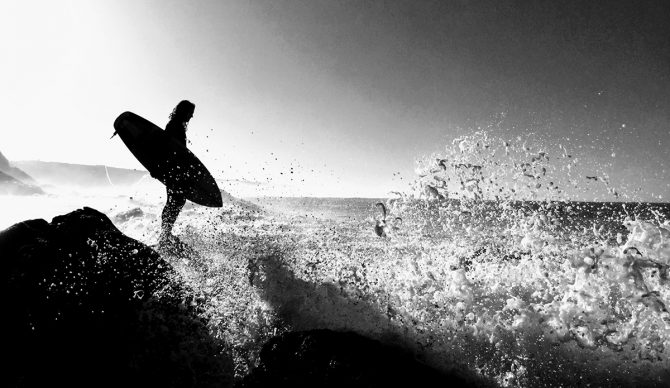 It’s a sunny March morning in Portugal and the waves at my local look pretty average. For one, the swell appears to be collapsing on the only half-decent bank in sight out of simple exhaustion rather than with any conviction. And even though the wind is puffing light offshore, it’s already starting to swing. I sit for a little longer, scanning the empty lineup from my car. The more I watch the more I think that calling it average might be too generous.

Still, I’m here, I have my gear and I’m contemplating getting wet. What does that make me? Well, it makes me desperate for sure, but it also makes me a flat-out fool. Not because I’m willing to grovel for the leftovers of some distant storm, mind you. No, I’m a fool because I’m about to risk persecution, either by police or in the public court of opinion that is social media, over waves that I wouldn’t usually look twice at. Beaches like this are closed and therefore surfing is prohibited, all in the name of battling a pandemic.

But for some bizarre reason, I’ve been feeling more compelled than usual to go for a wave. An urge I now realize spiked the moment that local authorities closed these beaches. It’s a curious phenomenon; the fact that taking something away from someone makes you want it more. The allure of forbidden fruit. An intrinsic part of the human psyche.

My self awareness of this condition does little to dampen my keenness. I know there’s a ban on surfing at the moment and that if caught I will need to front the cops or worse. I can already picture myself gesticulating wildly to one of the more grizzled “stay the fuck at home” local crew on the beach, trying to justify the unjustifiable as they dress me down in broken English. I’d be treated with the same disdain as a pig in a synagogue. But alas, I’m stinging for a wave.

Motivated by a yearning to get wet with no other souls to spoil the session, I brush this image aside and decide to paddle out. Now is the time for action, I decide, not the time to ponder societal or moral issues. I put on my wetsuit and make a move. I’ll only catch a couple of waves, I reason. Surely no one will begrudge a bloke like me a quick dip.

I sprint down the boardwalk towards the beach. On one level I’m waiting for a cop to leap from behind the scrub and give me a damn good seeing to with his baton. On another, I’m reassuring myself that this shouldn’t, wouldn’t, couldn’t possibly happen.

Upon reaching the sand, I pause to put on my leg rope, casting one last furtive glance toward the cliffs behind me. There are no cars in the car park. No people to witness my deed. I’m alone save a few gulls and a ragged pack of flea-bitten strays. The coast is clear.

A few steps forward and I’m in the water. That crisp, clear, and refreshing Atlantic water. I jump on my board and start stroking out the back. Once I reach the lineup, I sit on my board and take stock of my surroundings, expecting to feel relieved for pulling off a minor coup. Instead, I experience what can only be described as a growing sense of profound unease.

I’m a black dot contrasted against the pale blue water. A smudge on a flawless canvas. Vulnerable in the vastness of the ocean. By all appearances, I’m relishing the solo session, picking off set waves at my leisure, and making the most of the lackluster conditions.

Under the surface, however, my mind is a tangled knot. Juxtaposing thoughts vie for my attention. I try to label this current state. It’s not quite anxiety and it’s not quite guilt. But it feels wretched, nonetheless — like what I imagine it feels like to steal cash from a dying grandma.

I’ve been in the water for less than 45 minutes and as much as I try to stay calm, deep down I know that squeezing any semblance of pleasure from this session will be impossible while rooted in a state of escalating unease. So the call is made. I get the next one in.

What the fuck just happened?

You’d think I would be cheering. I just had a surprisingly fun surf, the sun is out, and more importantly, I wasn’t arrested. Despite this, my body language is that of a kicked dog dragging my feet back up the beach. A forlorn figure with shoulders slouched and head hung low, I shoot one last sorry look back toward the lineup I just had to myself. Then, in a moment of clarity, I’m finally able to label this unexpected emotion.

I didn’t expect to feel like this before I paddled out. In my head I was gung-ho and ready to surf, consequences be damned. But the reality of the situation I now find myself in has humbled me to my core. I’m the scab that crossed the picket line only to instantly regret the decision. Any rationalization that I was in the right has snapped like a stale breadstick.

Even the seagulls are loving It.

It appears that while I’m not convinced surfing should be outlawed or beaches barricaded as the pandemic rolls on, there’s some part of me that still feels rotten about scoring solo waves during the ban. As if I’m somehow taking advantage of the crisis.

I’m not a rebel like Miki Dora and if I ever busted down a door it was because the hinges were rusted. I’m also an average surfer with no legitimate grounds for skirting the rules other than to say surfing keeps my sanity in check (and gives my wife some respite from my nonsense). It’s not until I commence the drive back home that the cause of my shame dawns on me.

Instead of looking at the bigger picture, I weighed up my own needs, mentally sidestepped the consequences and continued to paddle out, essentially spitting in the eye of what is really our collective struggle. In short, I deemed that my desire to surf was more important than showing solidarity in the face of a global disaster. Now the only thing I have to show for it is a shitty story and a personal reflection on the cost of indulging one’s own interest, which has since translated into considerable self-loathing. I guess this means that for the time being, it’s back to fixing dings, removing old wax jobs, and writing more drivel.

After all, those average waves will still be there when this is all over.