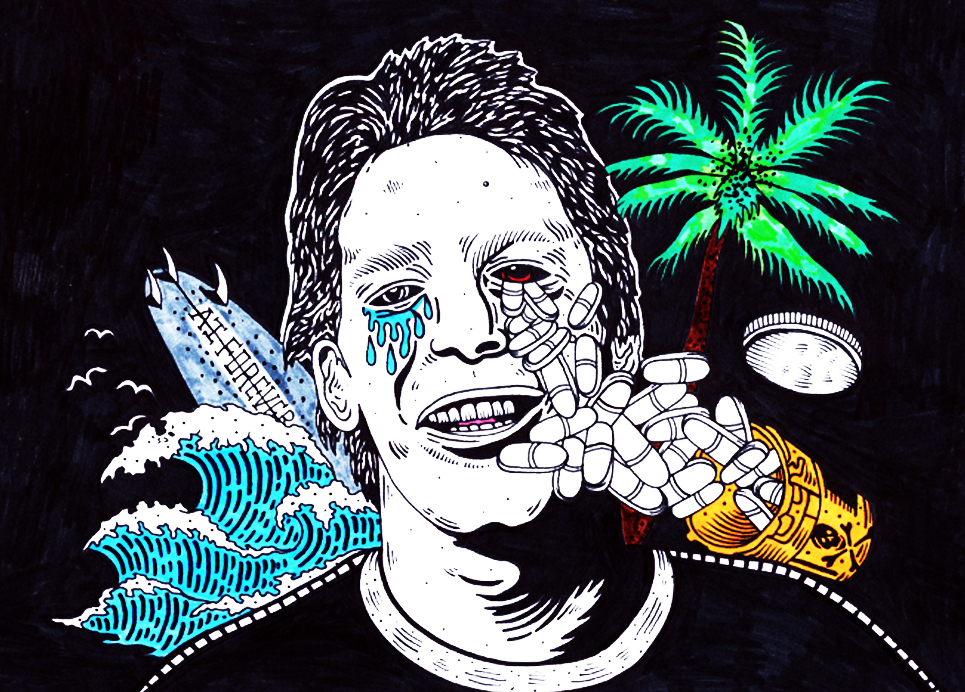 My father, a longtime waterman and surfer in Newport Beach, died in August 2010, just a few months before Andy Irons mysteriously died in a hotel room in Dallas. I anxiously awaited my father’s official cause of death for a few months because of an impending autopsy report. No one could tell me if it was an overdose or an accident, and there was no real information to share. When I finally got the news that my father was drunk and fell and bled to death, I was working in New York City, covering surfing for ESPN, and I had to report that Andy Irons had died.

For the months I waited for the official answer from the Orange County coroner, I didn’t speak to many people about my father’s death. And armed with the official answer, acute subdural hematoma with a midline brain shift, I wasn’t sure I wanted to tell. But I left voicemails and sent a few texts: He fell. I rarely revealed his blood alcohol level. People wouldn’t stop bugging me, asking all sorts of questions, I felt berated and attacked. Many wanted to know the deadly combination, answers for the how and why. But I certainly didn’t have any real answers, except that all the years of using, and drinking could kill anybody. Even our favorite people.

In some circles I had partied with Andy, always knew him to be wild and kind, and though I didn’t know him, I knew him. These kinds of men. The magical, powerful, amazing, wonderfully addicted men who suffered from all sorts of unspoken pain. When Andy died, I tried to piece together the puzzle, unsettlingly it felt like the same tragedy I had just endured. From August until December – I felt like I was spinning. I had projected so much onto Andy’s death – I was ashamed and certainly sympathetic to what felt like a cover-up. What felt like the loyalty of people to protect someone they loved. I related. I felt annoyed that people thought they deserved the answers. And yet, I was looking for the answers too.

This is part of surf culture, rather, the culture of any tight family – this insane loyalty – to protect no matter what. But it’s also part of addict culture too, and what families want to say about the people we love – what does it mean to tarnish a legacy? Even eight years later, I’m still protecting my father in some ways. It feels nearly impossible to be totally honest about the whole story because it’s painful and when there’s no one left to blame, it’s easy to blame myself.

My father’s friends tried to protect me. Like I didn’t know he’d been messed up for a long time. Though my father and I were very close, especially emotionally, there was so much silence too. When the coroner called she asked me if I had been in touch with my father – Yes, a few days before. And, they had reason to believe he might have had a drug-related accident –Yes, I’d been waiting for this call my whole life.

My father’s friends called the main number to ESPN in Connecticut and tried to reach anyone who would listen to get ahold of me, before the coroner could, to cover it up. To protect an image of who we always wanted him to be. An hour after the coroner told me he was gone, I got a call from an ESPN security guard that men in California needed to relay an important message to me: Do not answer any other calls.

Then people came forward trying to figure out who was responsible for my father’s final fall – who gave him the last of the pills, who let him get so deep, who didn’t make him get sober. And mostly, they were feeling me out to see how much I really knew. People talked about him, they wondered, they demanded answers. And still, they were quiet, we were all quiet, about what was really going on; We were grieving a person we loved, who was also a messy drunk and addict, and it could have been any one of them.

Perhaps it’s this loyal culture that is a cherished reason to be a surfer. Still, all the silence and protection can lead to wondering, enabling, begging, running, and worrying. I found myself wondering why there wasn’t more help for Andy. For my father. Why was it secret for so long – and one of those secrets that everyone knew – and why we are so good at keeping these secrets. But when you love someone, you’ll do whatever it takes, right?

A week before my father died, he tried to kick the pills. He’d gone to his brother and said it out loud: I want to quit. He died a week later.

I often wonder what I would have done if he hadn’t taught me to support him in silence; to never scream in his face to get him sober. I still wonder if there was anything I could have done to save him. If we were another family would we have had the courage to confront him, and the courage to protect him too? Maybe this is all families. Maybe it takes years to tell the truth, and even then, we are conditioned to be kind in our telling.

On a Father’s Day in the late nineties, my dad threw out his shoulder at Doheny. I remember trying to pop it back in. He was in a lot of pain. He’d already had years of back pain. We took him to urgent care. They gave him the pain pills.

We never defined the rest of his seemingly ongoing pain, though I wish we would have. What then could we have done with it? Would professionals be able to help with his darkness and his addiction? Plenty of people get sober. My father had tried many times. Just like Andy.

Eventually, he was buying and selling pills all over town; he was using my grandmother’s prescription’s to get more. Guys in and out of the water, high as kites. He always said he needed the pills for pain. The code of honor among my father and his friends was silence – was protection – was watching out for each other no matter what. That meant if a guy wanted to get loaded, or if a guy died in the early morning, you keep quiet. You must wear this code of silence as your badge of honor. If I had snitched, could I have saved him?

I’m sure my father suffered from depression after a traumatic and abusive childhood. The only thing, he said, that brought him joy was the ocean, and me. It’s a tough load to bear – being the reason someone tries to live, and it’s an even worse feeling when that love isn’t enough.

I watched Andy Irons: Kissed By God in a big theater with a bunch of fans. It felt like a memorial all over again. I left wondering if pieces of Andy’s story were still being protected – if the pain of talking truth to ourselves is much harder than we think. What do the gruesome details matter now? Perhaps, in this awareness about Andy and his struggles, there are other little girls out there who might confront their fathers, who might remind themselves that silence never saved anyone. Even if a man can’t be saved, it is worth trying.

It’s taken me years to honestly talk about my father, mostly to myself, how much I loved him and how shitty it was too. How all the years of loyalty and silence were painful and unfair. Sometimes I worry about his legacy – what he meant to so many people – but I know what he meant to me; I loved him. Maybe that’s the worst part of addiction and mental illness – you can wholly love someone and hate them too. You can blame yourself for enabling them, you can praise yourself for protecting them. You can wince at your loyalty and revel in the bond that it brings. Hate their demons and disorders, yet want to protect them too.