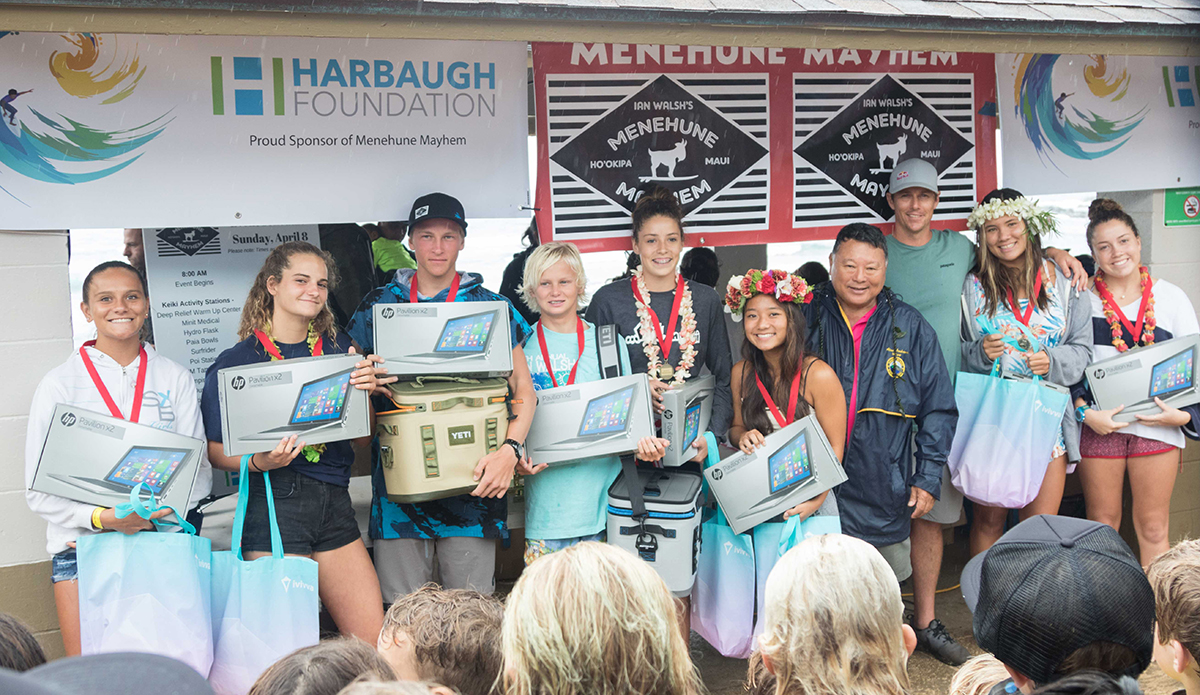 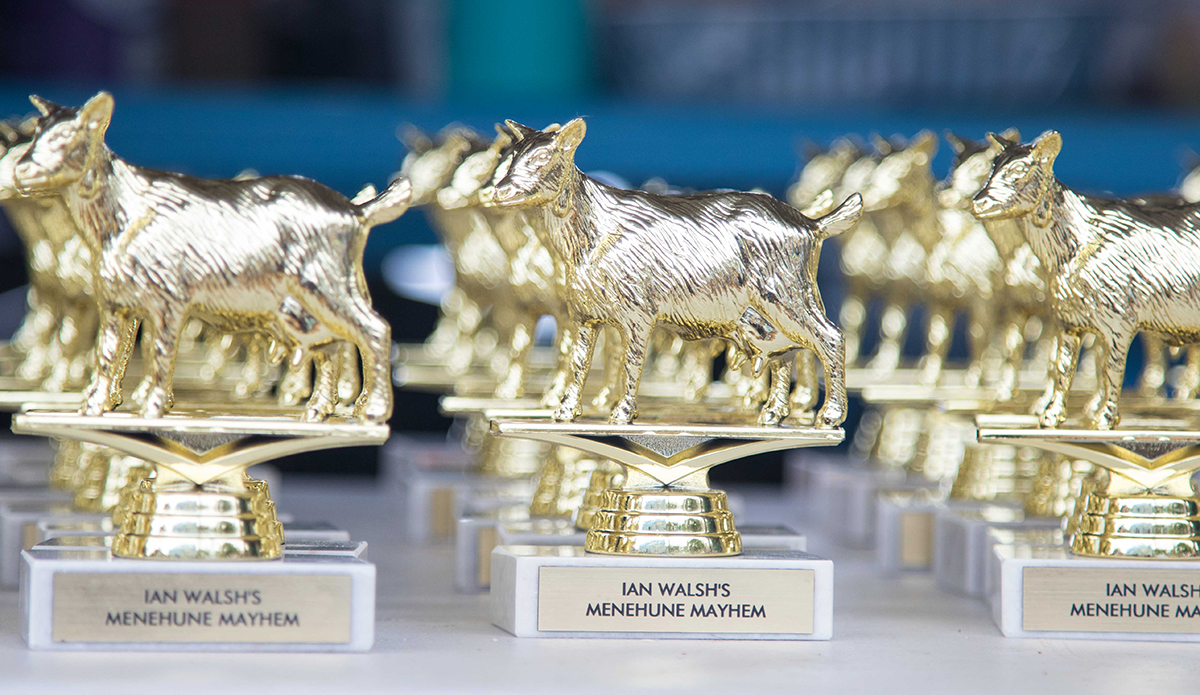 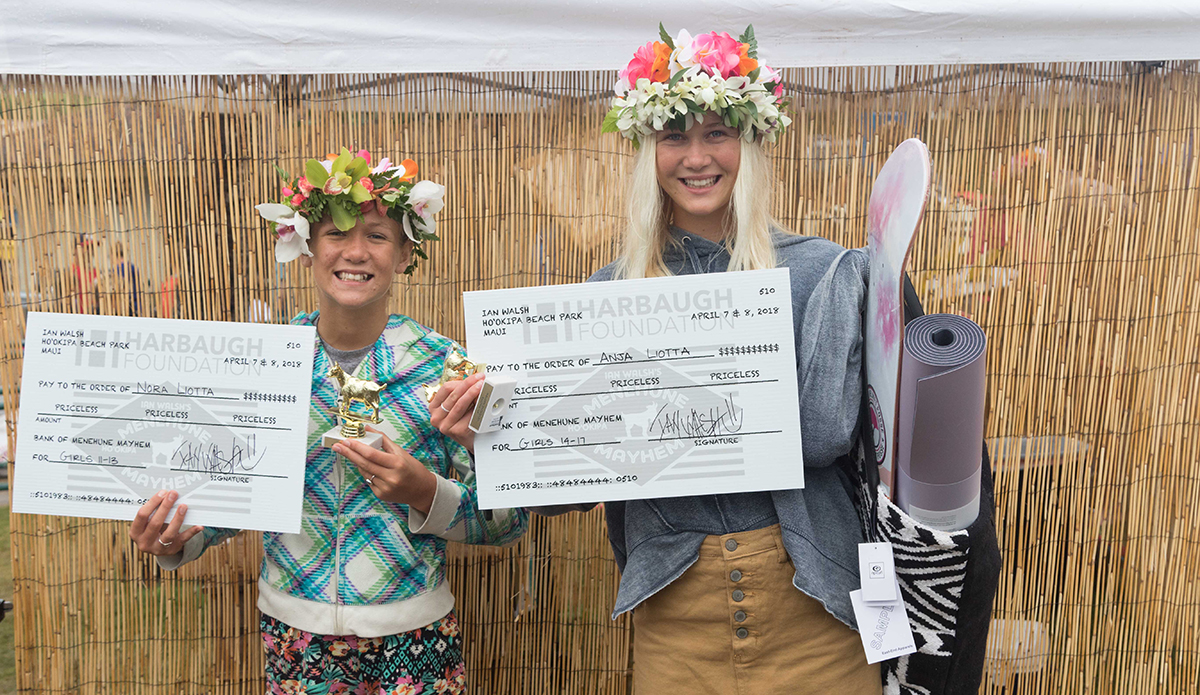 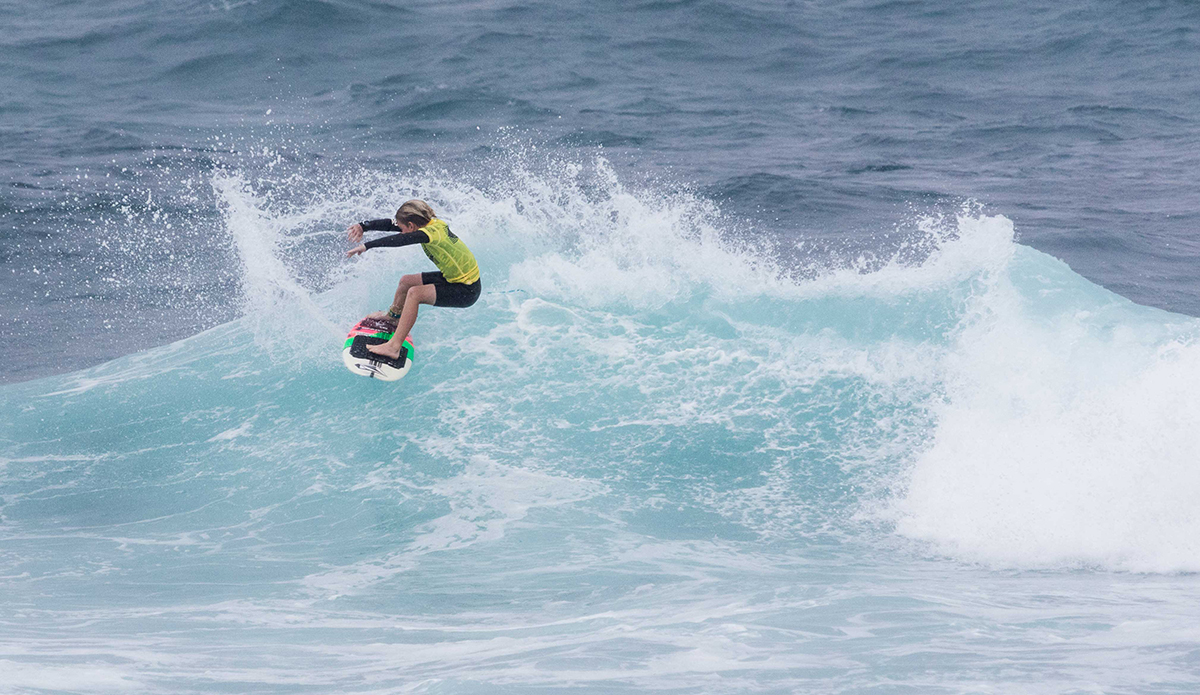 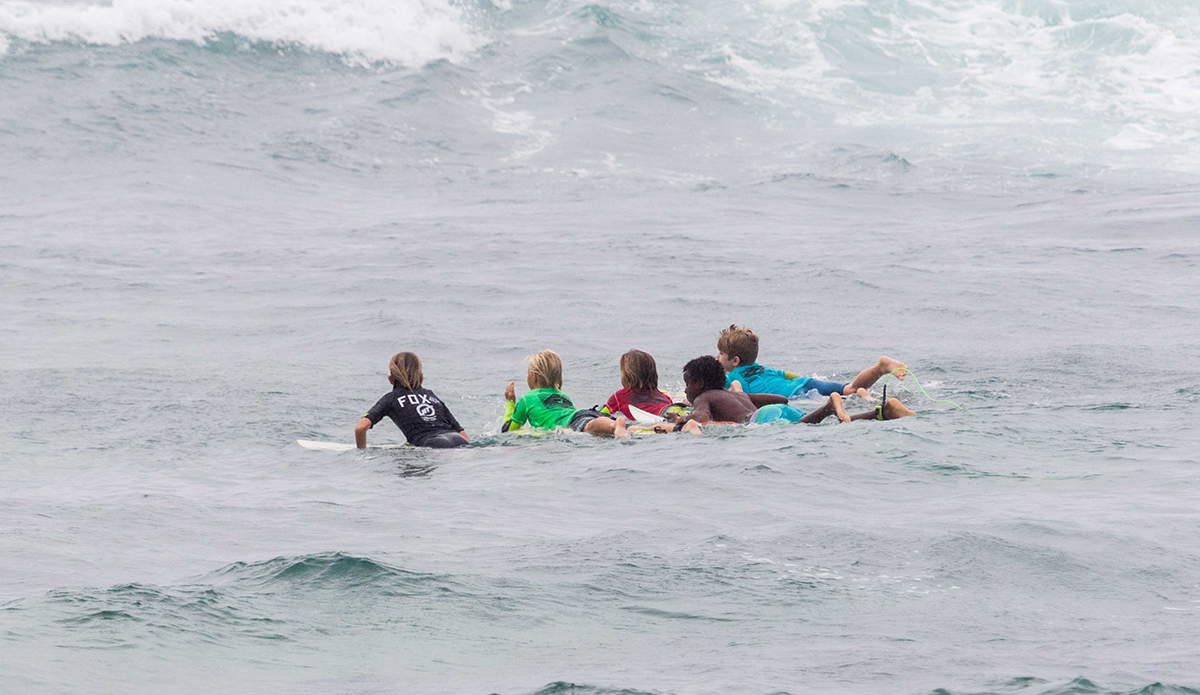 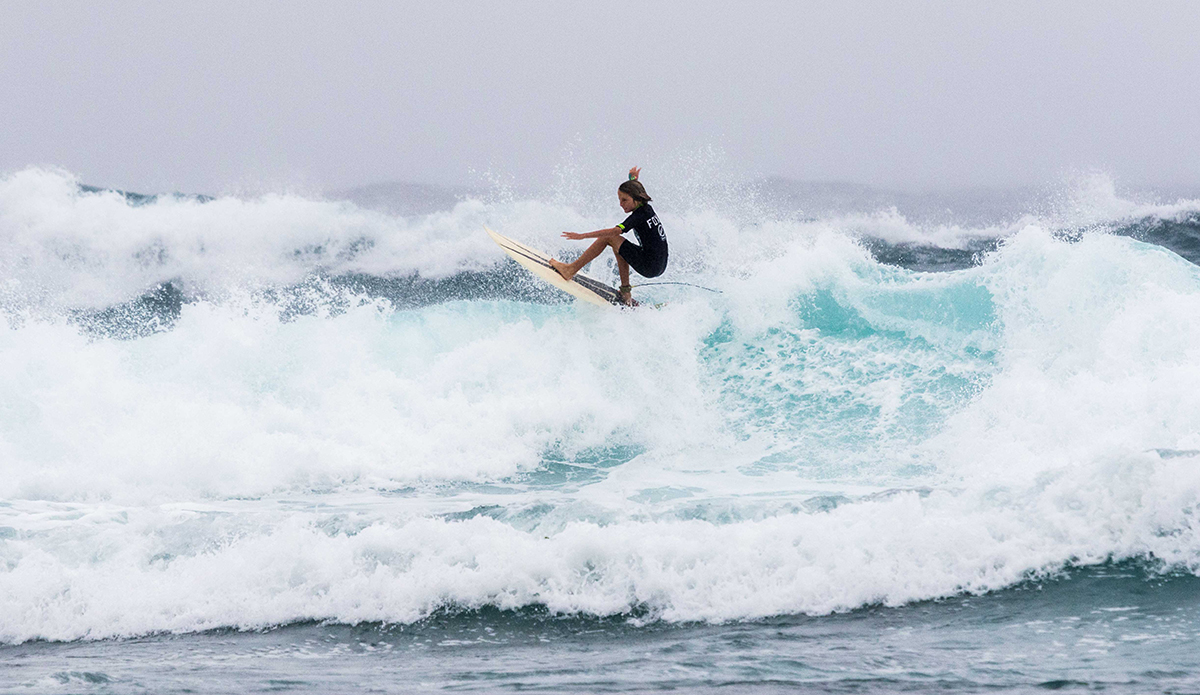 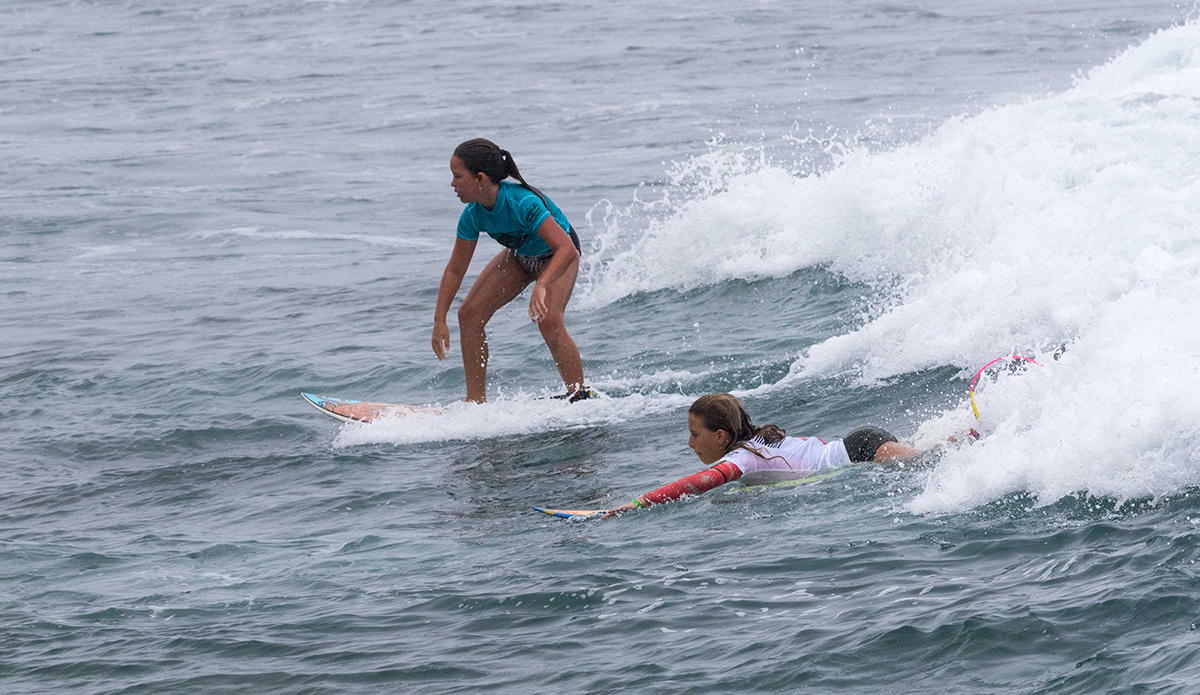 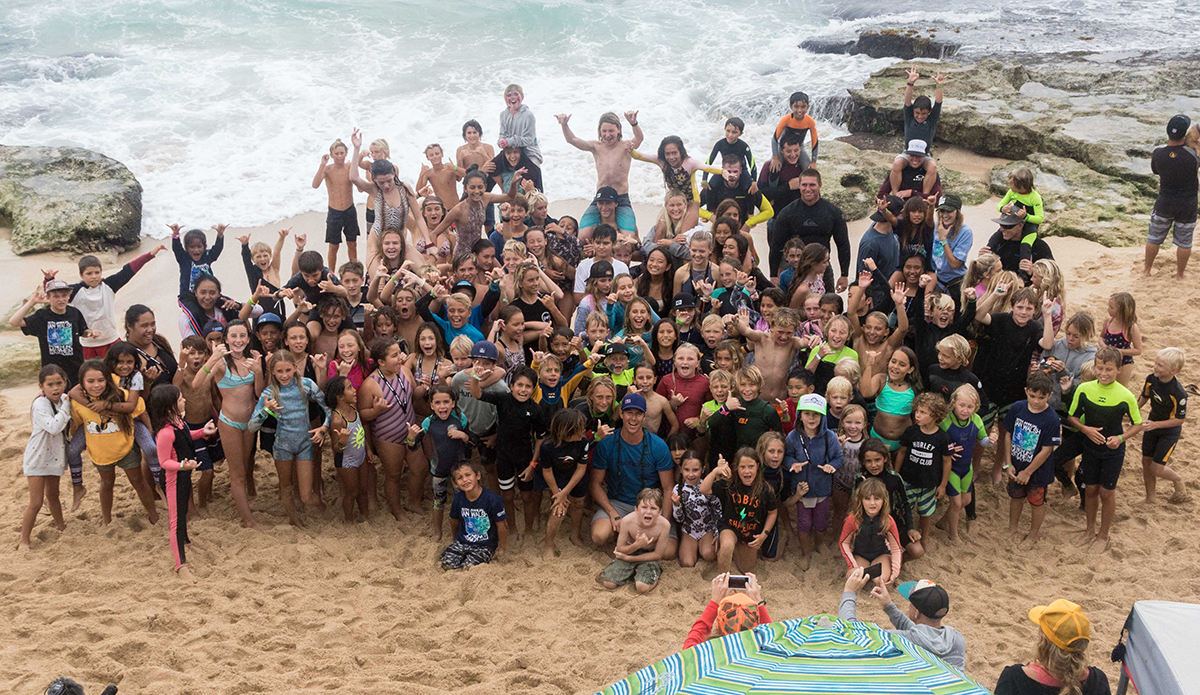 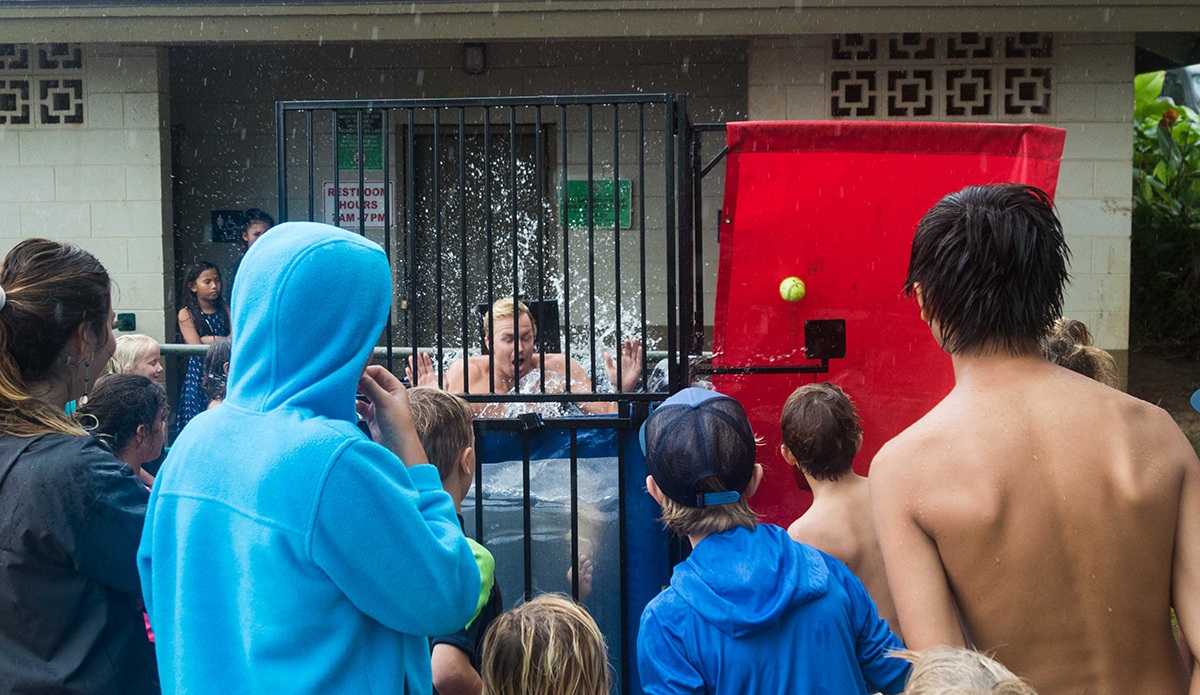 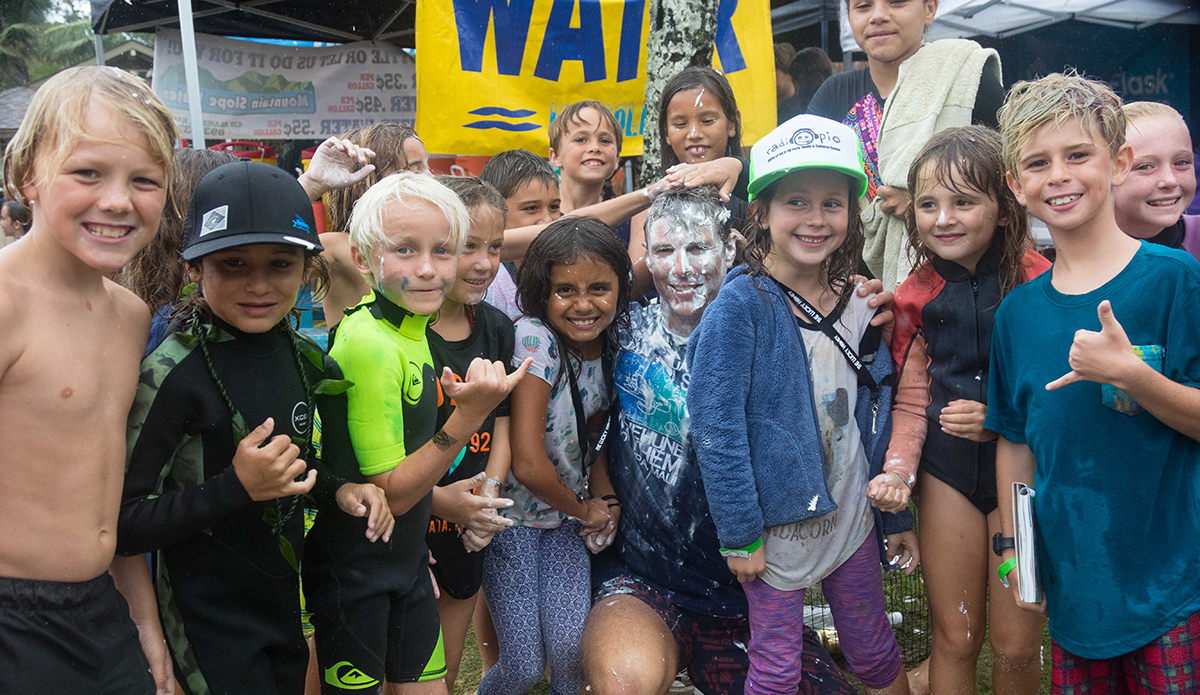 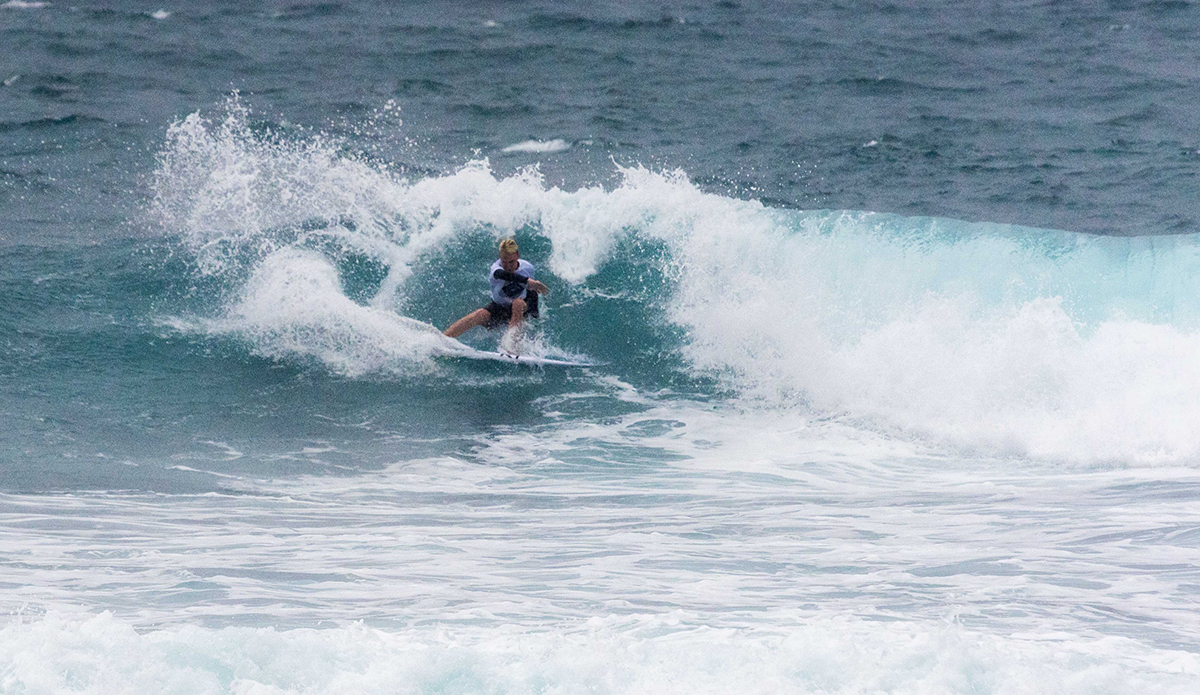 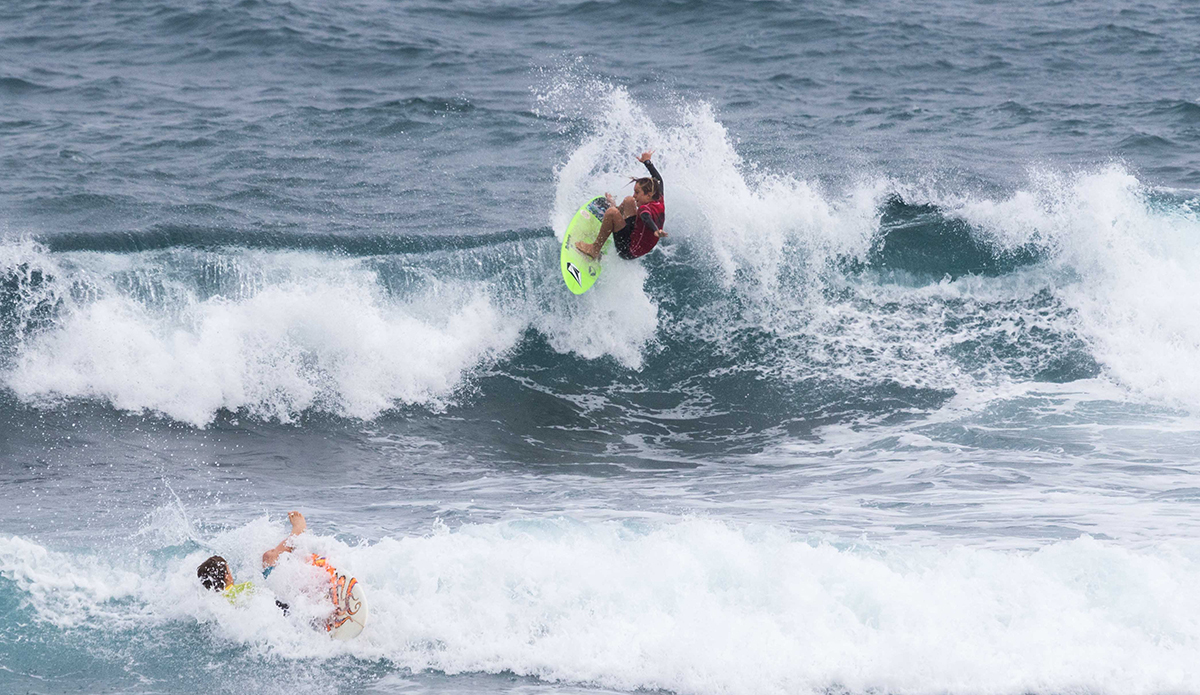 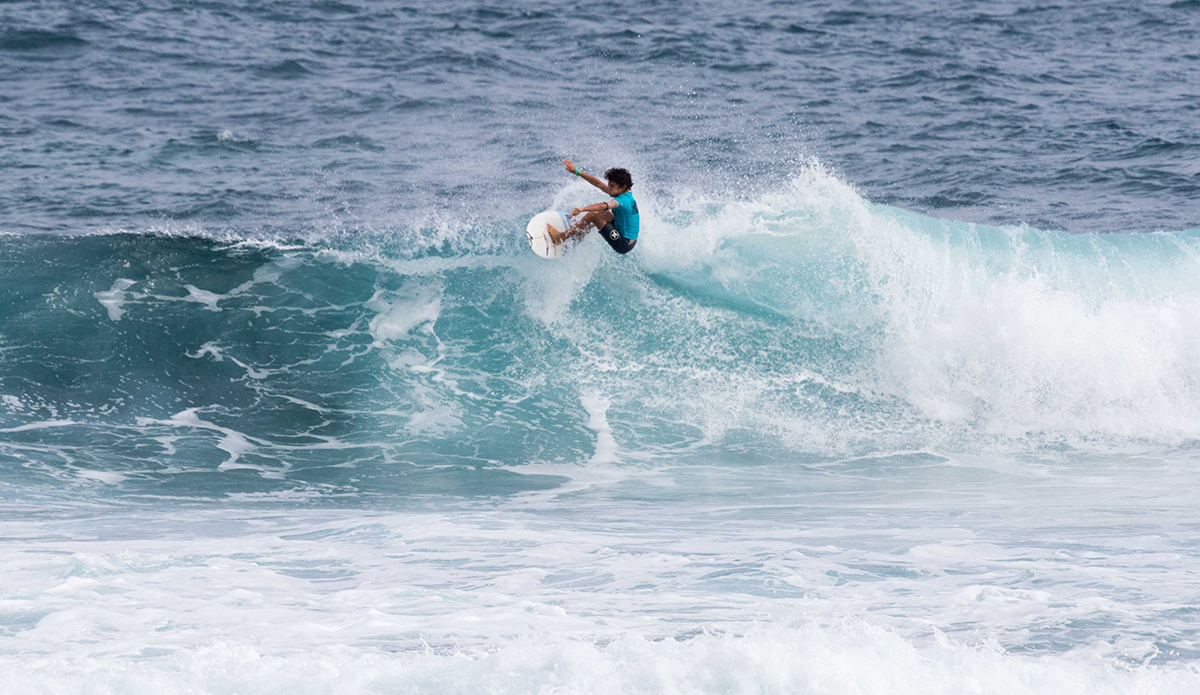 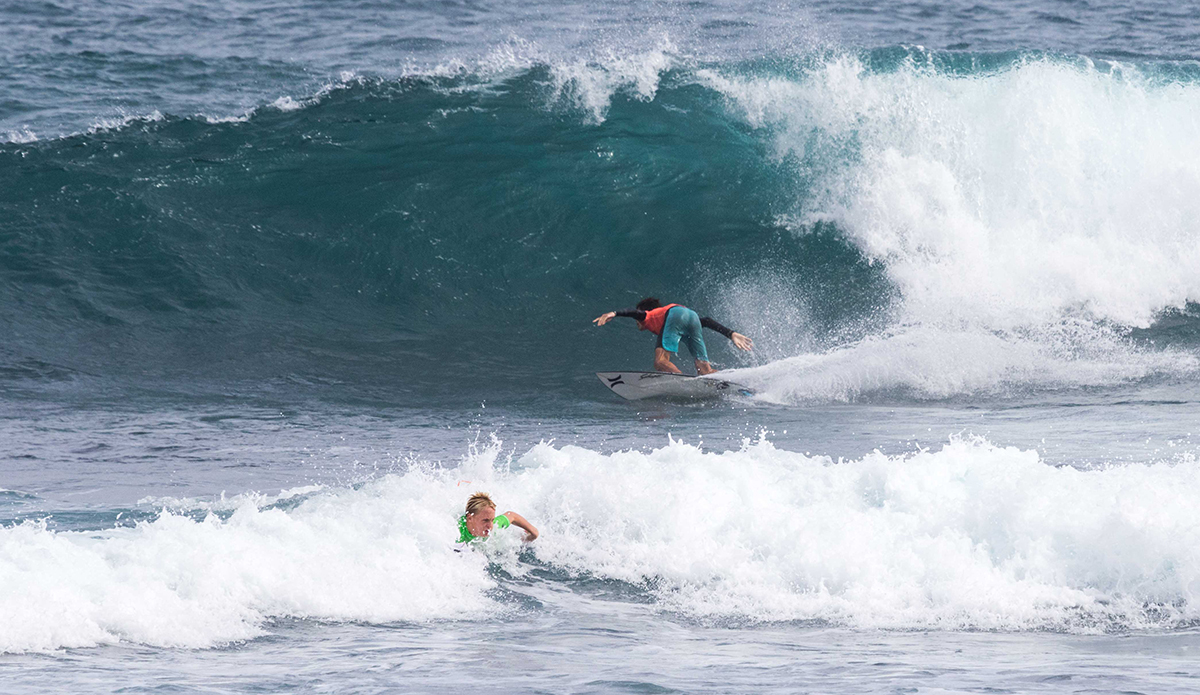 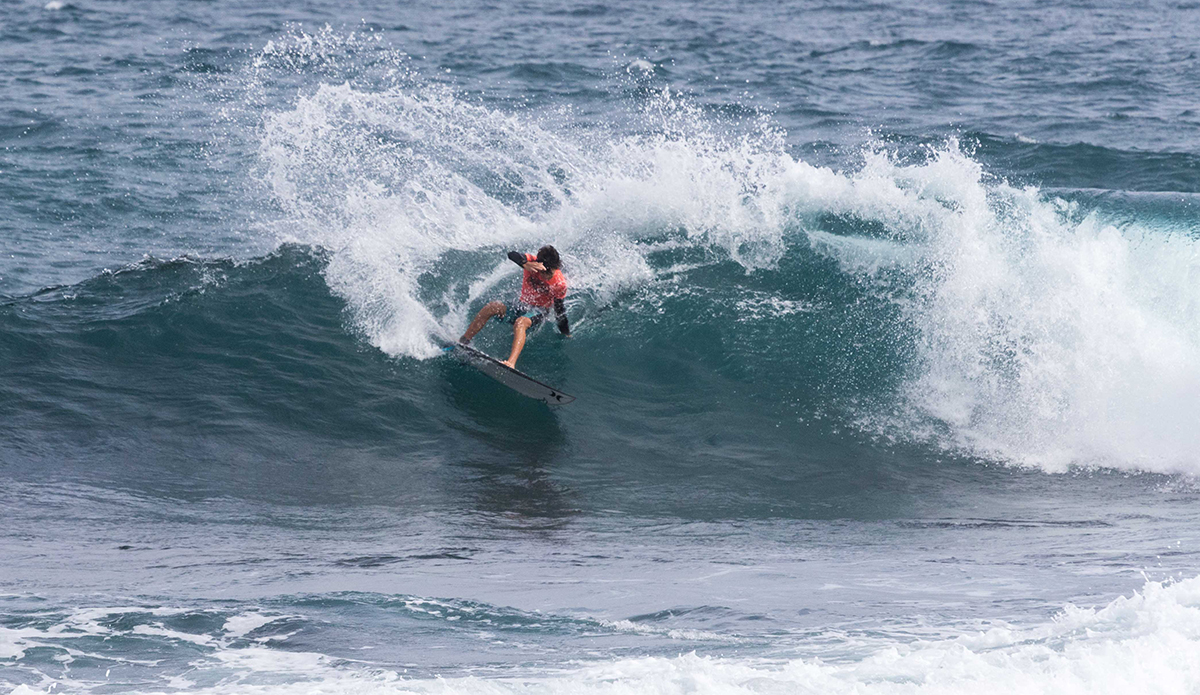 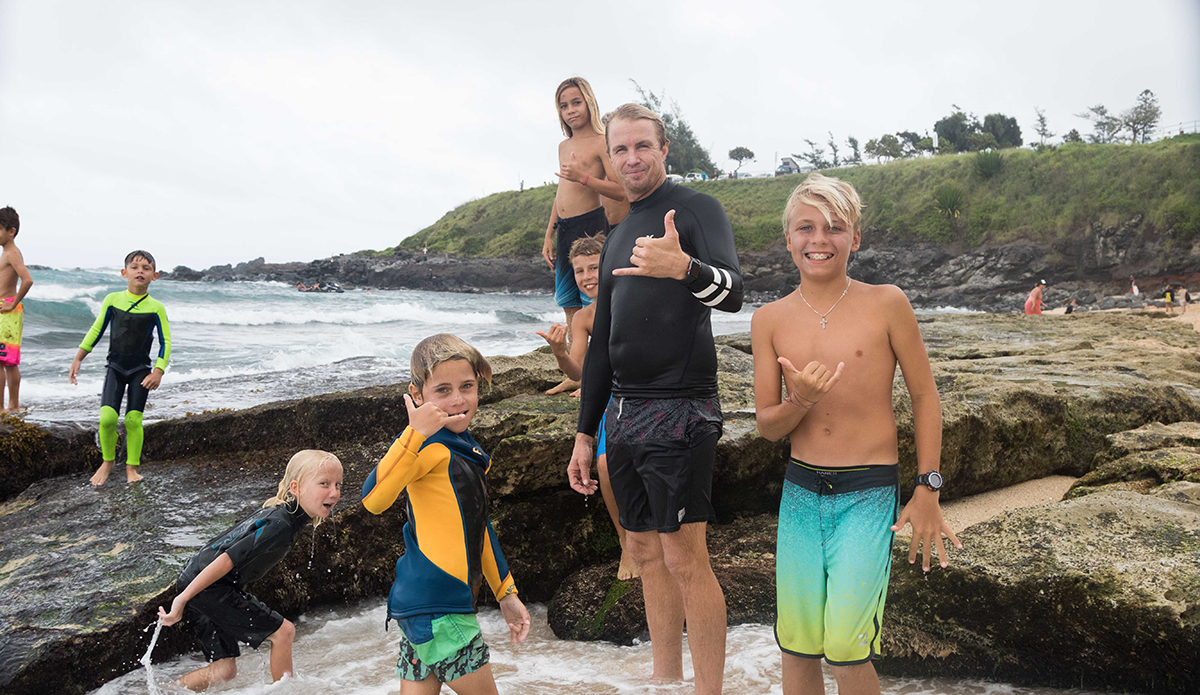 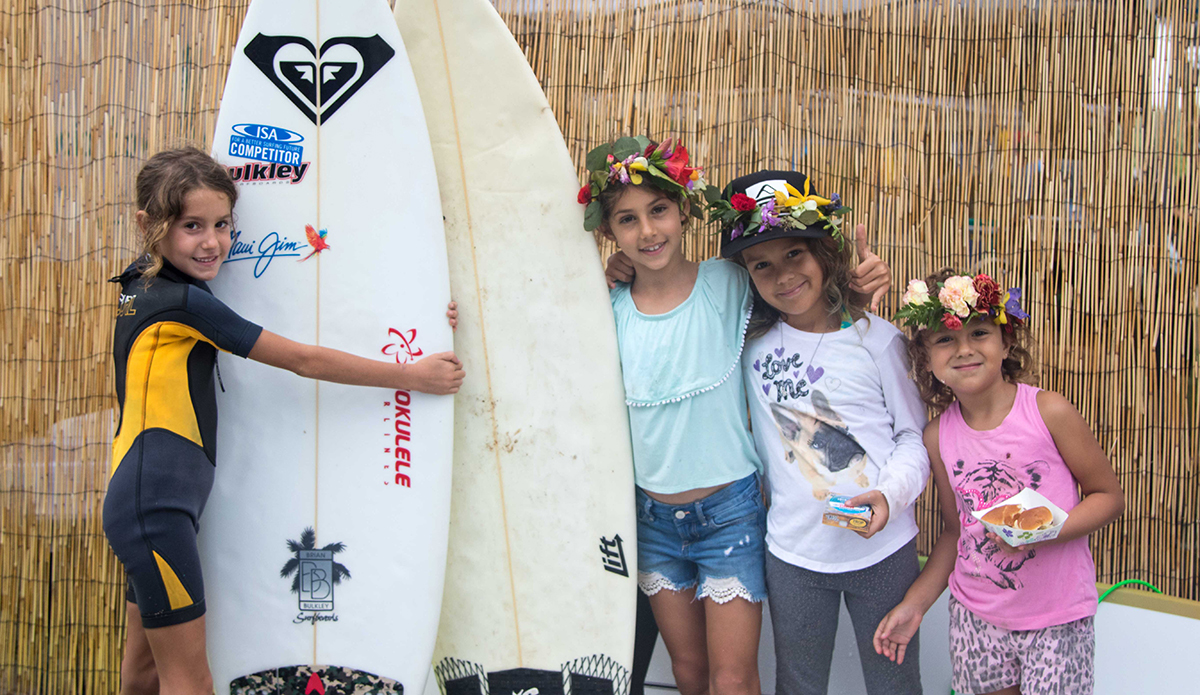 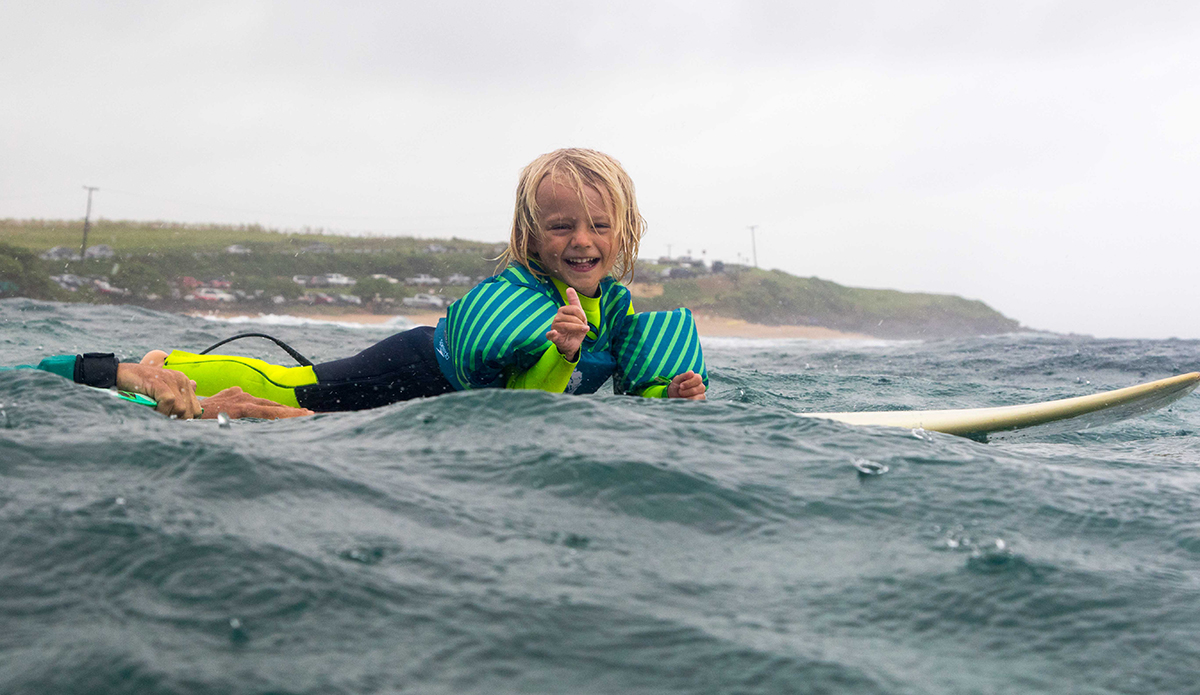 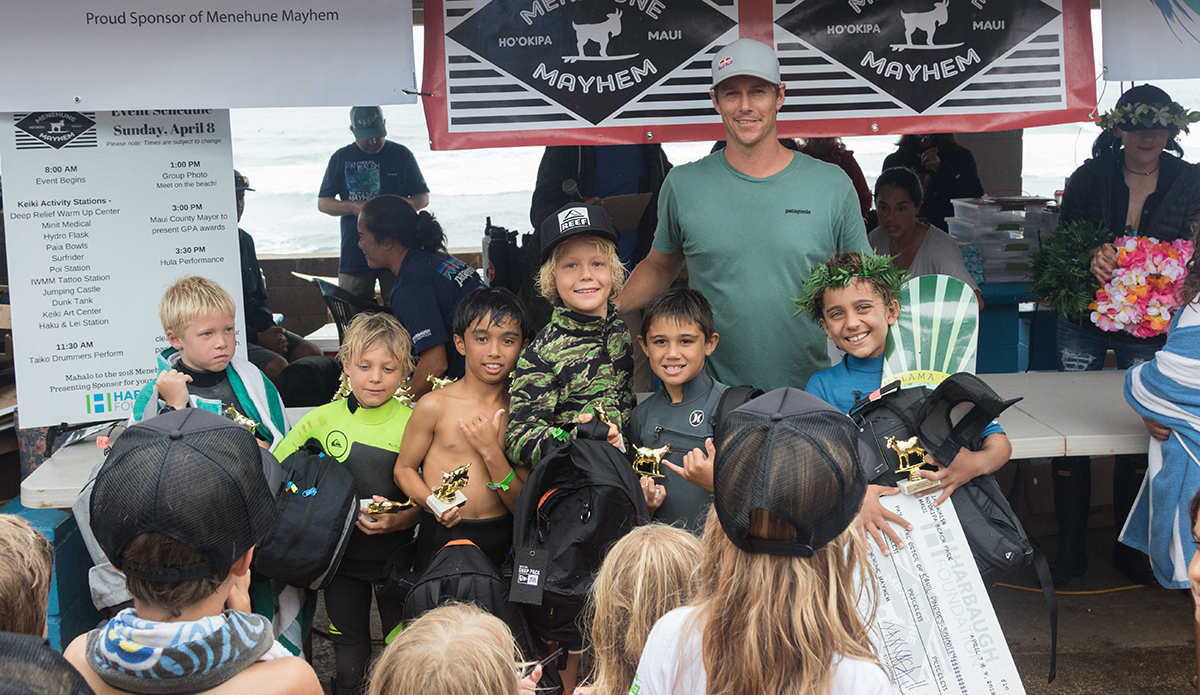 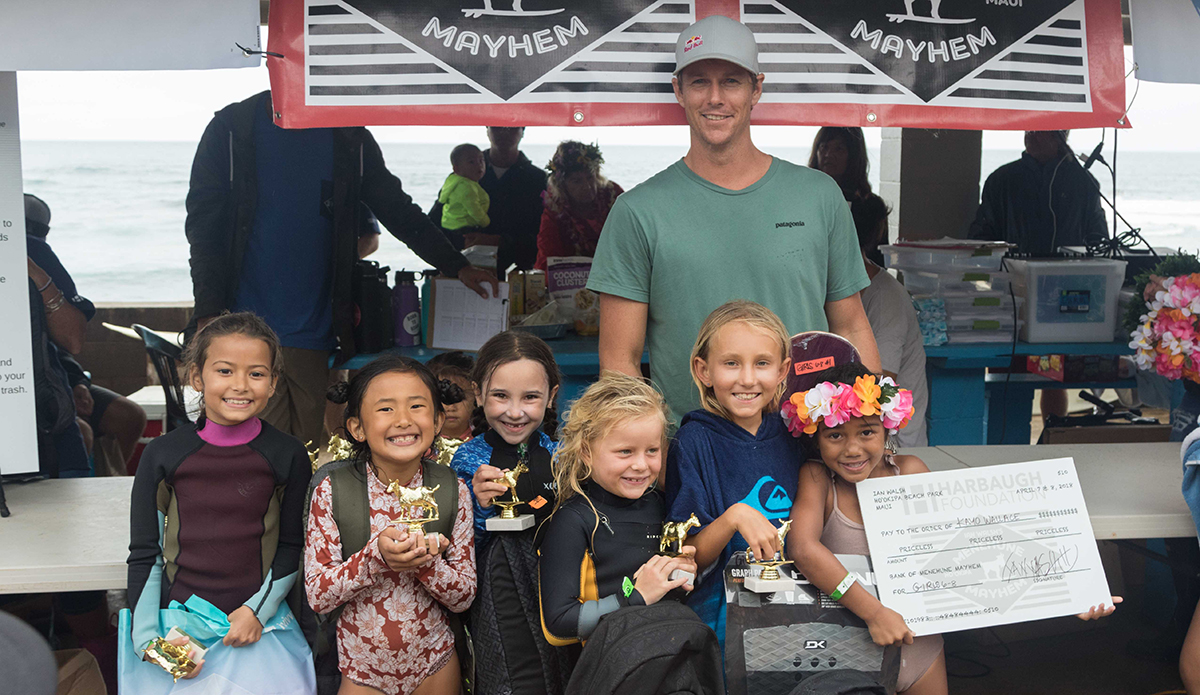 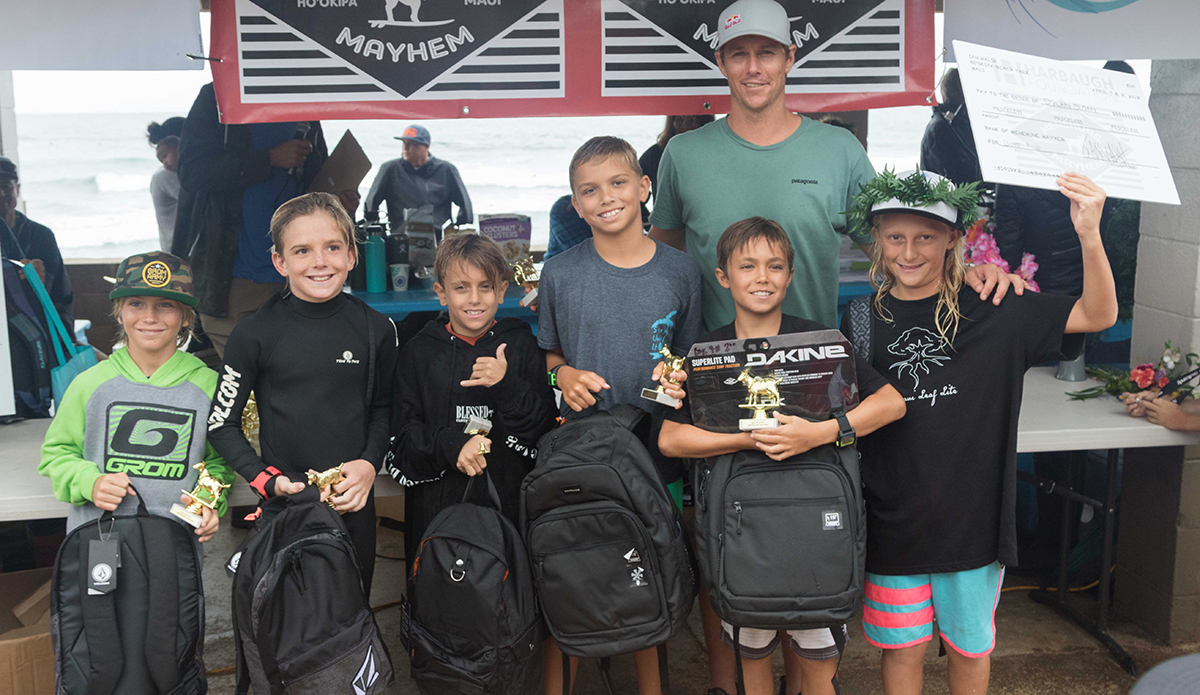 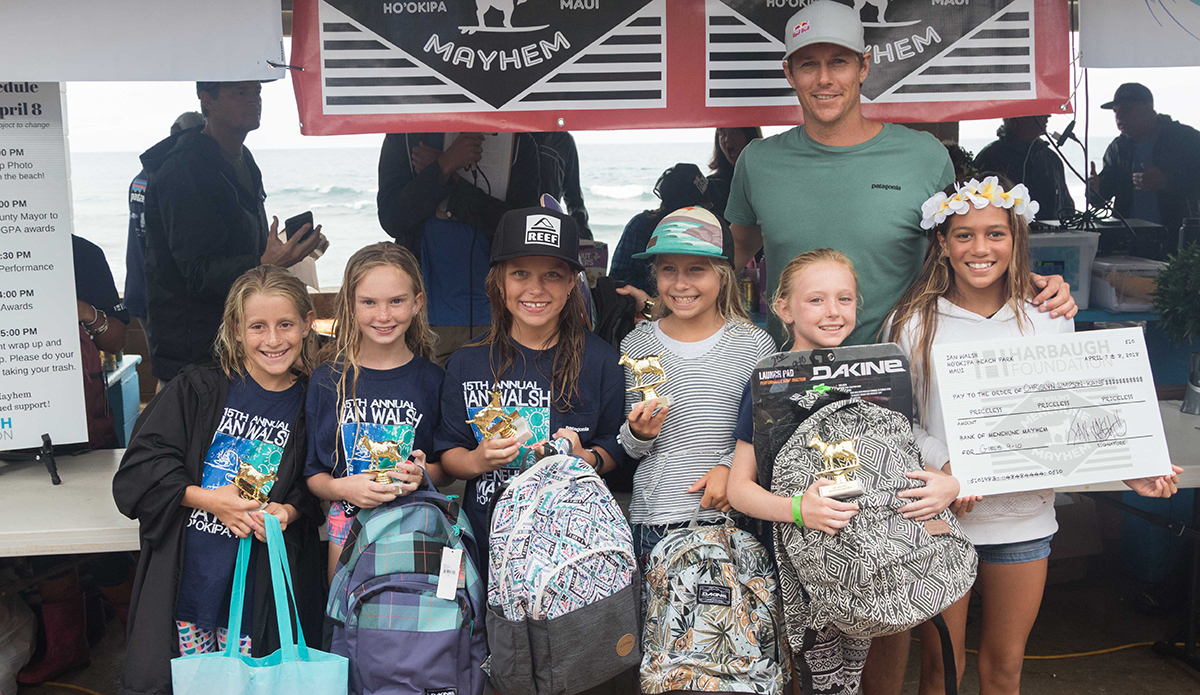 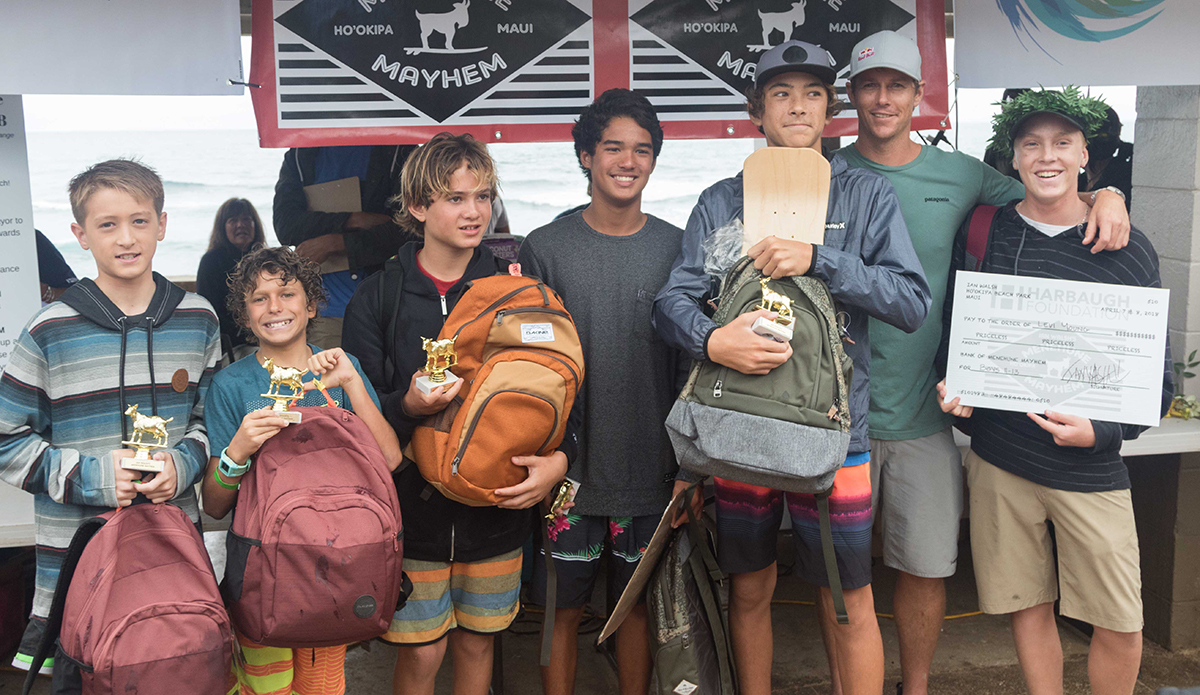 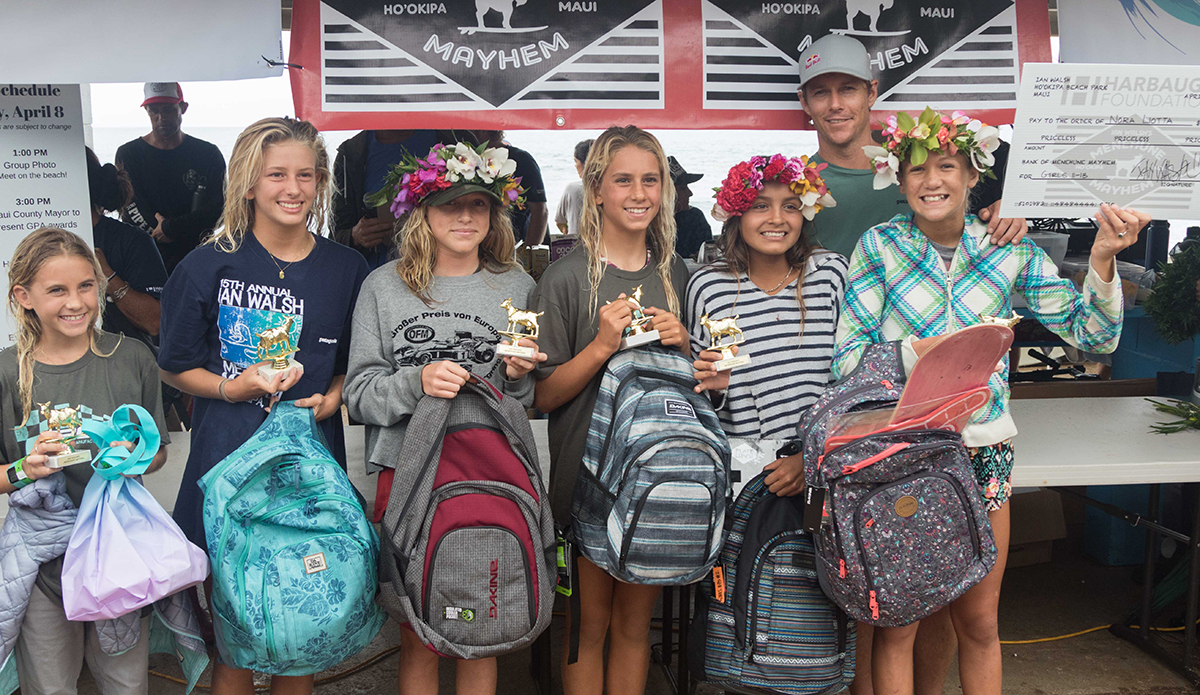 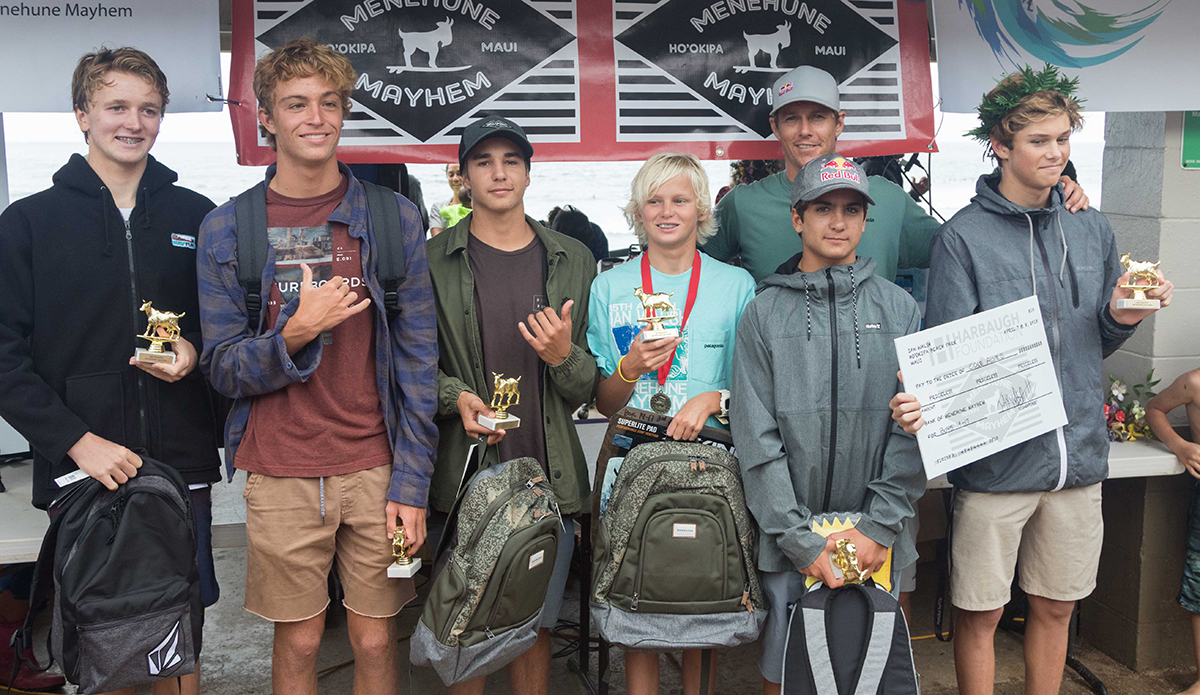 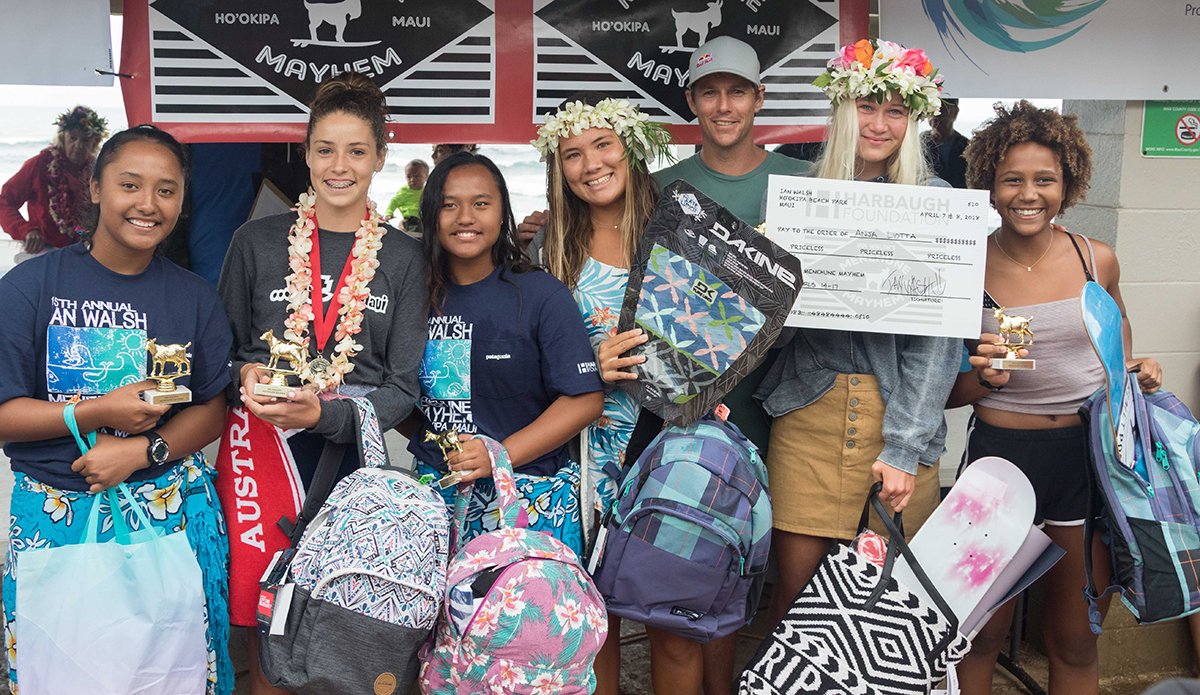 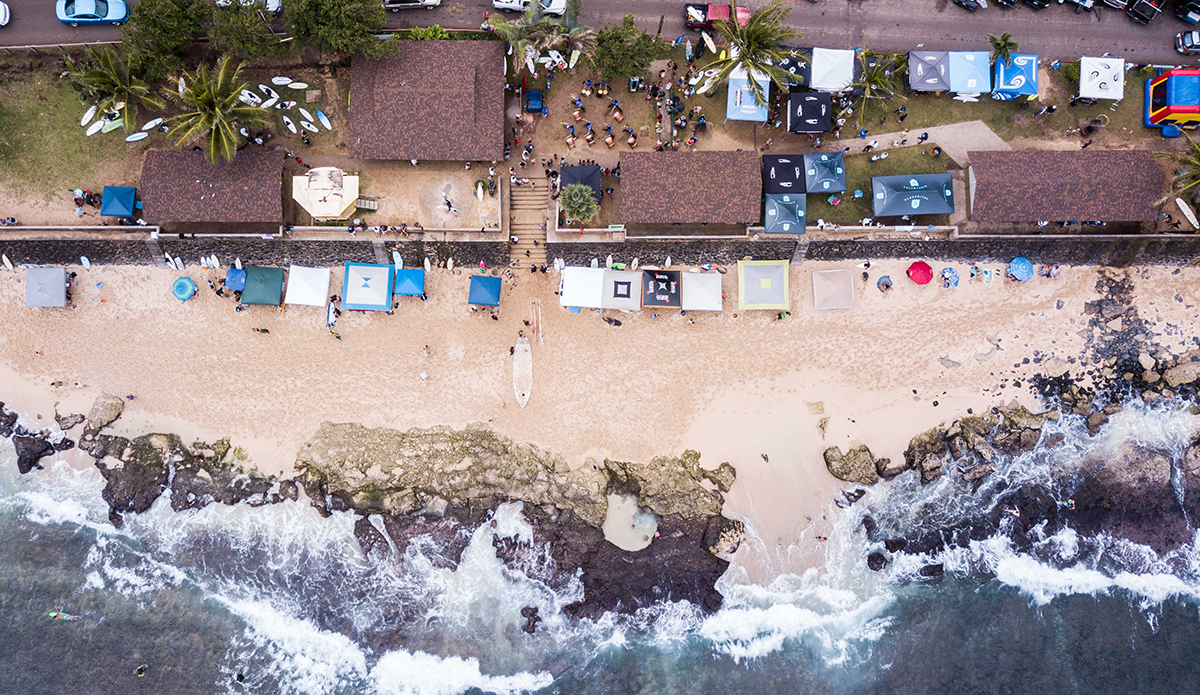 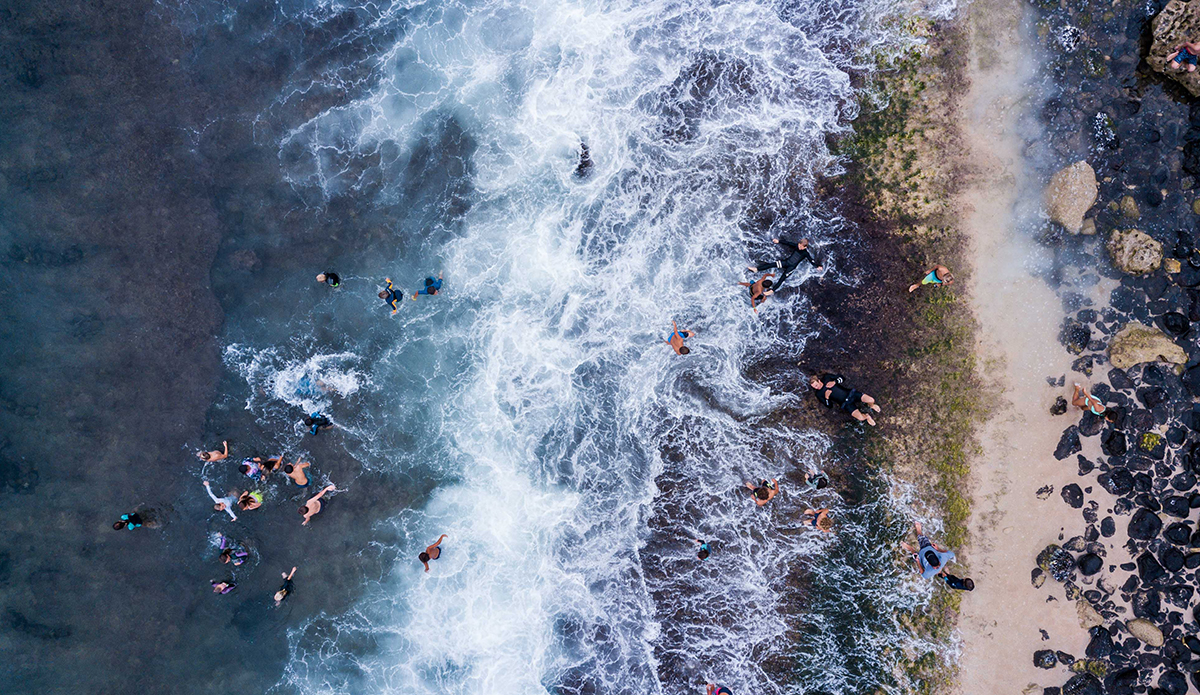 Everything perpetuates. The ocean flows steady to land, bounces off the shore, and rolls back into itself again and again, creating magnificent waves that anyone can appreciate. Rain falls and collects multiple times, nourishes its surroundings, and lifts into the sky to begin again. Communities reach out and over their youth, lifts them up, and spreads attitudes and passions that upcoming generations will carry on to their children and their children’s children and so on. We know this bigger picture exists but only experience snippets of this constant motion in our daily life.

In its 15th year, Ian Walsh’s Menehune Mayhem surfing competition had all of these elements at play.

It was a wet one, to say the least, and we don’t just mean the kids bouncing over Ho’okipa shore break six at a time. Despite nearly constant rain, hundreds of kids showed up to surf consistent 4-8 foot sets in 10 age divisions before about 500 spectators. Maui man and world-renowned big wave surfer Ian Walsh, whose family and friends help bring this event to life, felt the rain was a non-factor that only brought out the true resiliency of Maui’s youth. “It would be nice to have sun but the swell came with a little weather, so the tradeoff is that we had good surf for the kids,” he said. “The kids didn’t even notice; right now there are three girls playing in the ocean in the rain at 7 o’clock in the morning.”

This year, the event was a little different for a couple reasons. It featured a two-day format instead of the usual one-day event, which Ian feels was worth the extra effort in order to provide 100 additional kids the opportunity to participate in this unique surfing competition. Also new this year was a renewed sense of cultural awareness for the kids, including a haku lei station, hula, the rumble of taiko drums, and the cadence of a bagpipe band. Ian explains, “We don’t just tell them about things, we involve them in it. We don’t just say to them ‘Don’t use single-use plastics,’ we give them reusable water bottles and show them why we use them and how to take care of the beach. These kids are the future stewards of our oceans and planet.”

The Maui Surfrider Foundation was also there with some powerful examples that demonstrated the effects of plastics on our ocean ecosystems. Ecologically-minded surfing was a theme represented by Jeff Timpone, a Maui-based shaper who showcased the use of sustainable materials in surfboards such as recycled styrofoam, hemp fabrics, and flax.

This free weekend event also boasted a variety of fun activities like dunking pro surfer Jamie O’Brien in a dunk tank, a DJ for a dance party, a colorful art station, jumping castle, Hydro Flask ring toss, autograph booth with some favorite surfers and beaming whipped cream pies at adult leaders including Ian himself. Eight-year-old Chloe Brittain thought that this was the best part of the event, second only to the surfing, while seven-year-old Peyton Kuwasaki was all about the art station and being with friends. Both girls made it as far as the semi-finals in their age division.

Tasty treats were also available throughout the weekend provided by event sponsor, Paia Bowls, who helped fuel the crowd and surfers pre and post heat. In addition, Deep Relief Athletic Training Center offered a pre heat warm up to help contestants perform to their best ability. When the kids weren’t busy preparing or fueling up for their heat, they were taking part in the beach cleanup lead by the Maui Surfrider Foundation.

A scavenger hunt hosted by local retailer, The Lucky Honey, had the kids actively interacting with adults, getting to know the beach park along with a history of the island and best of all, working together to get it done. Store owner Theresa Koomoa shared, “It means everything to be here. All these kids look up to Ian and all of the adults. It was fun for them to come to our booth and have something that encouraged them to be kids and get them away from their iPads. It’s fun to see their faces and see them stoked and it’s fun to give back.”

Ian and his brothers were raised by an avid surfer, Peter Walsh, as well as a public school teacher, Kitty, whose birthday fell on day two of this event. Kitty shared that despite their aquatic achievements, her sons were brought up to work towards educational excellence, and growing up they knew they had to do all their homework before going out to surf each day. As a result, Ian went on to become a 4.0 student and valedictorian of his class. Educational achievement was a natural component to the Menehune Mayhem event, promoting school smarts amongst the surfing community. High school students who earned a 3.5 GPA and above won awards and a collection of the most coveted prizes including computers. Six-time Menehune Mayhem participant Tati Ebro admitted that her own 4.0 status could be partly attributed to her desire to keep her grades up for this contest. This was her third year receiving this commendation.

Thanks to the support of the Menehune Mayhem Presenting Sponsor, the George and Betty Harbaugh Foundation, Ian Walsh’s Menehune Mayhem Foundation is also offering two scholarships totaling $5,000 to high school seniors planning to attend college in 2018.

Lifelong Paia residence, Valerie Toro said that she attends the Menehune Mayhem every year, and finds it to be a valuable asset to Maui youth, “I’m from Paia, I used to walk to Ho’okipa as a kid; Ian and his brothers grew up here too. Now they are giving back. That’s what our kids need. A sense of place, a sense of Ohana and a sense of community.”

The generosity of the George and Betty Harbaugh Foundation along with the additional event sponsors Patagonia, Hydro Flask, Minit Medical, Paia Bowls and Hawai’i Life will help ensure the continued success of this free annual community event that promotes surfing, creativity, academics and environmental responsibility for Maui’s youth.

In the end, they come for the surfing and iconic goat trophies but leave with so much more. The experience offered to the young minds of Maui are those that can perpetuate generations: a positive sense of environmental responsibility, cultural appreciation and a passion for surfing.

Note: Additional information for the Menehune Foundation Scholarship can be found at www.menehunemayhem.org. Deadline to apply is May 4, 2018.