Ian Walsh Talks Us Through His Perfect 10 at Jaws 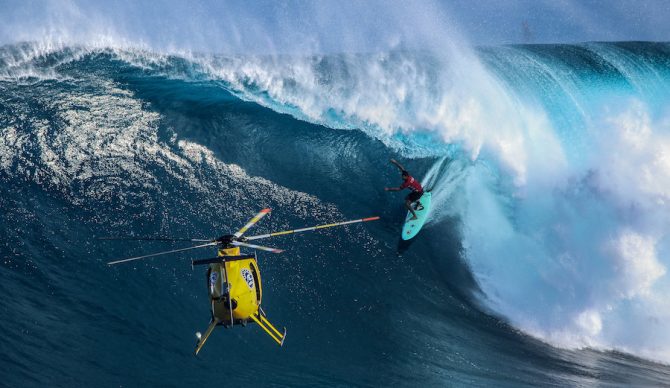 Some are calling this the best big wave ever ridden in competition. Photo: Robin Ernst Photography

What went down at the 2017 Pe’ahi Challenge was by all accounts historic. And at the center of it all was Ian Walsh’s 10-point ride in his semi-final heat against Kai Lenny, Ryan Hipwood, Lucas Chianca, Jamie Mitchell, and Albee Layer. Some are calling it the best big wave ever ridden in competition. And it propelled Ian to the final with the momentum to win the whole event.

We called Ian up to dissect what went down and how incredibly technical and perfectly executed the wave was.

So first, walk me through the wave.

Ok, yeah. So to start that, it basically is a lot of positioning for me. Seeing what angle the swell is. Seeing what angle a lot of the sets are coming from, and trying to figure out what’ll give you a little window of opportunity to actually catch the wave if a really big one comes. And I was kind of just triangulating myself out there, and get in a little zone that I thought would give me an opportunity if a wave big enough would come in out there. And that wave came in, and the first one looked kinda like a little bit fatter and was moving underneath me and kind of gave me a weird feeling the second one would have a lot more energy and be big enough to stand up further out than that wave and give an entry into it.

So I kind of scurried out over that first wave – I think it was a little bit smaller one – and there it was, the whole wall just started standing up, and stretching out into the horizon. And as I stood up, you’re processing the wave and kind of reading what you think it’s gonna do and how you think it’s gonna load up and break on the reef. And as soon as I got to my feet I just felt like I had to go really fast onto my inside rail, I don’t think I bled off one ounce of speed the entire way into the barrel. I felt like I was on my toes, driving my inside rail in and trying to project my board and fins as fast as they could go down the line, which is pretty rare to be able to get a barrel like that going that fast and once you get into it the wave still keeps running. Then it started to open up and breathe a little bit. So I was trying to try to time when the barrel was breathing and when it sucked back to go a little bit higher and kind of brace for the pullback before it spit, and kind of just working my board as best as I could. And the board felt responsive and felt incredible underneath my feet. A lot of times when you pick these boards up in the garage when you’re getting ready you’re like, “How am I ever gonna knife this board into the face and be able to make subtle adjustments?” Like you’re surfing Backdoor or something. And it really did feel every bit responsive like I was surfing a small board in good waves. And that’s a testament to Chris Christenson and how much we’ve refined my boards over the last few winters with how frequent the swells were the winter before last. Every big swell we were able to get on the phone and kind of refine the equipment with where my visualization was going and what I was thinking as far as what I wanted to feel under my feet. And he did an incredible job with consolidating those sporadic thoughts.

What’s sweeter, the win or to get a wave like that?

That’s a really good question. I mean it was definitely a really big goal of mine to do well in this contest, and it feels awesome to have an opportunity to catch a wave like that. And like I said I feel really, really fortunate to have had the opportunity to even catch that wave. But I think it was pretty cool to be able to win at home. I’ve spent so many years surfing around the world, and I have spent a ton of time with Andy Irons when he won his world titles on Oahu, and just seeing him finish a year in Hawaii and win the world title with all his friends there celebrating, you know, those things have just been etched in my memory. And it was really fun to watch Billy [Kemper] win the last two years at a place where he collectively grew up, here on Maui. And it’s just, there’s something pretty unique about just having a lot of things come together at an event where you live. It was something that was pretty special for me. You know, my family’s here, my friends are here. I’m pretty stoked. My dad got to see it, and my mom, and all my brothers, so, that’s a challenging choice. But as far as the wave goes, that was a very special wave that I’m very thankful that Jaws let me share her.

People are saying it was one of the best big waves ever ridden in competition. How do you feel about that claim?

It’s cool like now that the dust is settling, and I’m actually checking out my phone again – it’s really cool to see people that are that interested in it, and yeah. It’s awesome. I appreciate everything that they’re saying, and it’s just fun to be a part of the conversation. I’m just thankful, you know, we all got to kind of ride that wave together in a sense. That more than anything, I guess.

Yeah, and the wave’s heavily documented, too, right? I’ve seen at least two angles of video. There’s a ton of photos. Everyone was kind of transfixed when it went down so there are like a million ways to relive it now too.

Yeah, the broadcast was incredible with how many angles they had of all the waves and how well it was shot and packaged. I saw a couple really nice texts that some people sent me just how fun it was to watch it from all over world, because there were so many different angles. The helicopter was showing the landscape of the lineup and the cliffs in the foreground and the rocks, and then they have an incredible water angle, multiple land angles. And the package of the broadcast sounded like it came off super super well. I haven’t had too much time to watch everything yet, but I’m looking forward to it. And it’s awesome to be able to relive it. I definitely have that wave burned into my memory, and it’ll be at the foreground of that I’m sure for the entirety of my life. That was definitely a time stopper for me. And I’m just really thankful to get a wave like that. You see so many amazing waves over years and years and years surfing out there. And, you know, you spend hours visualizing maybe getting an opportunity like that so it was cool to catch a wave like that.

And there were other so many other phenomenally ridden waves in the event, you know? So much good surfing that, you know, it was just fun to be a part of all the other incredible waves the guys and girls got.