If Political Figures Surfed, Here’s What They Would Ride 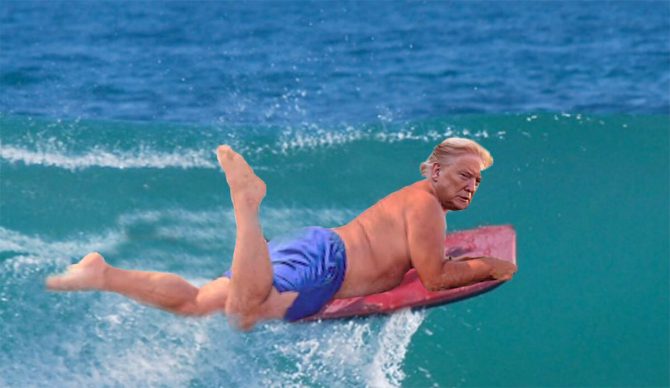 If he boogied, he’d be the “best boogier ever.” Photo: Staff

Politics are best left out of the water. Most people are surfing to distract themselves from the absurd circus transpiring on land, so it’s good cricket to keep potentially divisive topics to yourself. There is already enough to worry about in the lineup as it is – sharks, jellyfish, aggro locals, rocks, etc – that adding politics to the mix would be like throwing gasoline inside an active volcano.

Even if a politician paddled out into your local lineup, no one would care to discuss their policies or shady practices with them. It goes against surfing’s mores. But there would be one very acceptable question on everyone’s mind: what board are they riding?

So, if some of the United States’ most prominent political figures surfed, here’s what you would find under their feet.

Bernie Sanders – The self-proclaimed democratic socialist would stand firm against the symmetrical surfboards that have monopolized our lineups. He would be impossible to miss at any local break – constantly shouting “party wave” before dropping in on you while riding an aggressively-weird asymmetrical shape. Feel the Bern, indeed.

Donald Trump – Trumpster would dial up the bombast and proclaim in a tweet to be, “a tremendous surfer. The best.” While Obama was busy falling down paddleboarding (SAD!), Trump got a killer tube ride. People always tell him what a sick barrel it was. And he would claim to have ridden the most high performance of shortboards while doing it.

However, there would be no evidence of Trump anywhere near a surfboard – but multiple photos would surface of him caught in a rip current, clinging to a souvenir store boogie board as he floats aimlessly out to sea.

Joe Biden – A former lifeguard who once tangled with a gang member named “Corn Pop,” the Democratic Presidential nominee has the basic skills to be a competent surfer. However, he was a Senator in Delaware for 36 years. I grew up in Delaware and can confidently tell you that A) the waves are terrible and B) if any state is going to have gang members named after sugary breakfast cereals, it’s Delaware.

Like Trump, Biden likely wouldn’t surf, instead also preferring an alternative watercraft. Considering he is in that old rich guy phase where all there is to do is ride your bike around and spend money acquiring useless possessions, dude is definitely pedaling out to the lineup on a surf bike.

Kanye – Yeezy would ride a surfboard that was really good ten years ago but is now delaminated and at risk to snap in half. Some would speculate the board has already snapped.

Mike Pence – The current Vice President would refuse to ride anything other than a traditional Hawaiian longboard purchased from a Christian-owned surf shop. Once he was up and riding on a wave, he would never turn left or right, choosing to only go straight – just as God intended.

Kamala Harris – Anyone this tenacious from NorCal is well suited to be a local at San Francisco’s Ocean Beach. And if you’re paddling out at OBSF, you are definitely on a step-up thruster.

Donald Trump’s Entire Cabinet – This group is the political equivalent of a Nebraskan family taking a surf lesson together, haphazardly wafting on foam boards. They dutifully follow the directions of some random guy who appears to have never surfed in his life, but is wearing a “Surf Instructor” jersey, so they continue to trust him even as he pushes them backwards into yet another double overhead closeout. They don’t bother to ask questions because they are not there to accomplish anything of import – only to brag about that one time they went surfing.

While all of these known political personalities would be scattered around the peak of your local break, there would be one shadowy figure sitting way, way too far outside.  From that position, it would seem impossible to catch a wave, let alone make any measurable impact in an election year.

And then, the wave that rogue surfer was waiting for would appear – a cleanup set so large that it devours the sky, destined to wipe all the other surfers from the face of the Earth. The patient mystery surfer turns around to paddle and reveals themselves to be The Asteroid, the one that has come to put Americans out of their collective misery the day before the election. And as it comes screaming down a Nazaré sized cleanup set towards all of us, you can clearly see it is riding a big wave gun.