I’m a Surfer With Autism, Let Me Share How It’s Changed My Life 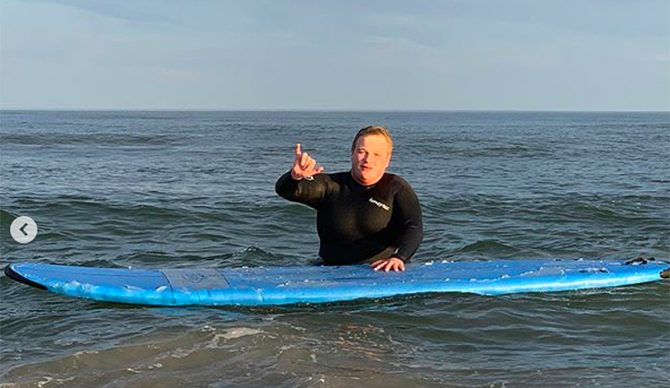 I’m a Surfer With Autism, Let ME Tell You How It’s Changed My Life. Photo: Instagram

Many stories begin with prologues, right? Well, this story has one too but I’ll cut straight to the point. When I was two-years-old, I was diagnosed with autism, the neurobehavioral condition that includes impairments in social interaction and developmental language and communication skills combined with rigid, repetitive behaviors. This can exist on a wide spectrum, ranging from severe to high-functioning.

Before 2017, the year I started surfing, I was struggling with identity and the idea of what I wanted to be. I was a student and a gamer but wanted to become so much more. Then my childhood friend Ryan Tomlinson told me I’d be meeting Ben Gravy. Ryan had been working with Ben, taking photos and videos of him, and when I got the chance to hang out with them for just a few hours one day, I was inspired to give surfing a chance. Ben was now my best friend.

When the weather warmed up for summer, the boys over at Heritage Surf Shop in Ocean City, New Jersey wanted to help me get into the groove of things. They encouraged me to keep going, to keep learning, and to find for myself what surfing’s all about. And with that, they became not just my friends but also my mentors. I caught my first wave that summer and was hooked. I knew it, too.

Eventually, summer ended, the weather turned cooler again, and school started back up. I didn’t let go of the surfing spirit, though. I watched surf videos and visited surf shops, including my friends at Heritage. Around the same time, one of Ben’s sponsors, Hyperflex, gave me a 4/3, guaranteeing I’d get back in the water as early as the next spring. Sure enough, two important things happened to me that spring: I got my first job and the concept of what’s now known as Blue Wonderland was created. Originally, I wanted to make a surf film that I’d called Blue Wonderland, all about surfing on the Jersey Shore. It never came to fruition, though, because I didn’t have the time or resources to execute it. But the name stuck with me as something I could make so much more.

I surfed that summer when I wasn’t working and caught some fun waves when I could. Even though I wasn’t surfing a lot, I wasn’t going to give up on it easily. And when the next fall rolled around, a picture of me was featured in a surf magazine. I was ecstatic when I read the article, “How to Change Your Mind: Mental Judo and Why There’s No Such Thing As a Bad Surf.” I started receiving support on my Instagram page from athletes and companies: Ben’s sponsors reached out, CJ Hobgood, the World Surf League, Kookslams, Jack Freestone, Nora Vasconcellos, Albee Layer, and too many more to count. Even now, I just want to take a moment to thank them for all the love.

Then, when 2019 arrived, I was in for another unexpected surprise and my story took an epic turn. I received another Instagram message from Matunas, a surf wax manufacturer from Southern California.

“You ready to make a Blue Wonderland wax with a cause?” they asked.

The idea was for them to make a signature wax and I would design a label. They also wanted to donate a portion of all sales to a charity of my choice, and I immediately chose Faces 4 Autism, a non-profit organization dedicated to helping, educating, and supporting autistic individuals and their families. I’d been involved with them from the beginning.

After hard work, Blue Wonderland Wax was released on the internet, organic and proudly made here in America. Within days, the support I received was incredible. The Gudauskas brothers nominated me as “Grom of the Week” through their own foundation and we sold over 300 bars right away. In addition, I also was asked to give two keynote speeches this year, talking about my success story. The first was at the Faces 4 Autism conference in March, where I was awarded a $200 scholarship and the Devaney Award for Community Service. The second was at my future college, Stockton University, for the annual Dare to Dream conference.

So let’s get to the big question: How has surfing impacted my life? Well, as I’ve said before, surfing is like therapy for a lot of autistic individuals, it gives you freedom. Every time I’m out, I feel free and happy knowing that I’m one with nature and the water. Catching a wave is joyous, feeling it carry me to places both known and unknown. Surfing motivates me to pull off the “next big thing,” whether it’s a visit to Kelly Slater’s Surf Ranch, a surf in BSR’s Wave Pool, or being interviewed by Ellen Degeneres or Jimmy Fallon. Whatever it is, I’m ready to change the world.

The stoke is on, and it always will be.