INSPIRED: A Blind Surfer’s Faith Takes Him To Pipeline

Editor’s Note: INSPIRED is an ongoing series where we feature uplifting stories of ordinary people overcoming unthinkable adversity by harnessing the restorative power of the ocean.

I was born blind, so being blind is normal for me. But I still had to get used to it — I had to find ways to adapt, I had to make my own way, to learn things, and to live. The biggest thing for me has been to learn how to surf, and how to deal with my negative thoughts, like: “no way I can learn this,” or, “I should give up.” But my God is powerful and I have faith in Him and he helped me overcome. I never imagined I could surf or do things like this. But it was always in my mind. It was my dream.

As Derek Rabelo will tell you and has told you, he was born blind, unable to see even the faintest glimmer of light, in the small beautiful city of Guarapari, Brazil. Deciding he wasn’t going to confine his life to being blind, he pursued surfing, and now he finds himself doing the unthinkable — surfing the North Shore’s gnarliest waves. His journey to Pipeline has been documented in Beyond Sight, an upcoming story told by Walking on Water Films, featuring the likes of Bethany Hamilton, Kelly Slater, Laird Hamilton, Makua and Koa Rothman, Rob Machado, Tom Curren, Joel Parkinson, Kala Alexander, Mike Stewart, Lakey Peterson and Damien Hobgood.

His coach, Magno Passos, a former professional bodyboarder, prepared him for Pipeline. And in the process, Magno experienced and continues to experience Derek’s very visible strength and determination firsthand: “The will of Derek to surf crazy and dangerous waves is incredible. I would never say to him that is impossible for him to do, though we know his limits and some days we don’t take him. For me, the biggest challenge at Pipe is the crowd and the first days at Pipe only a few people knew he was blind. Many times, people almost ran over him, or the opposite. People were really upset with me because they thought it wasn’t cool to let Derek surf at Pipe.”

I first started to surf when I was 17 years old. I wanted to surf because I lived close to the beach. I can hear the waves. I can feel the ocean. And my family — my dad is a surfer, my uncles, and I have many friends who surf. My dad is the first person to teach me how to surf.

“Aside from experience and skill, we have to be really prepared mentally to be out there [at Pipe] and that is exactly it what calls my attention in Derek: he never really gets nervous after a big wipeout, which makes a huge difference. How you react to those critical moments matters. Derek has had many wipe outs in many sessions and yet I have never seen him nervous or anxious — maybe his blindness helps him in these moments… that’s the real difference in Derek.”

I went to surf Pipe because I have a friend who talks so much about Pipe.

Pipeline is a dream wave for every surfer that enjoys barrels.

And that wasn’t any different for me. I felt very blessed just to be there, and even more to surf it — the best wave in the world. The first few times was very fun, I really enjoyed it. I felt such a freedom, a very good vibe. It’s kind of hard to describe.

My favorite part of surfing is that I can make many friends. They tell me on what side is the wave, when it’s coming. And everyone in the lineup is pretty nice to me.

When I surf, I feel so close to God. I don’t have a fear ’cause my faith in God is bigger than my fear. I intend to keep sharing my faith in God through my experiences in surfing — as well as get some other waves like Indonesia, Mexico, and maybe Jaws soon — and of course keep helping and inspiring people. 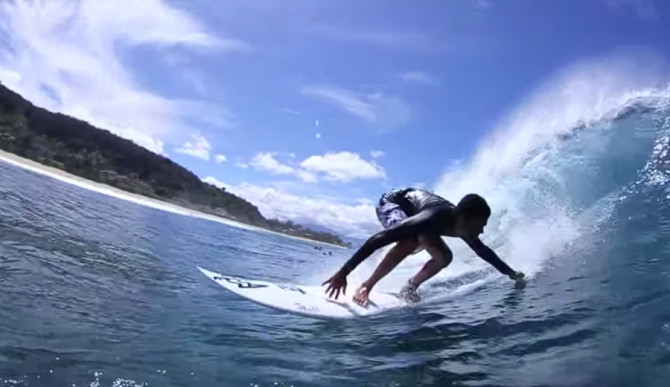