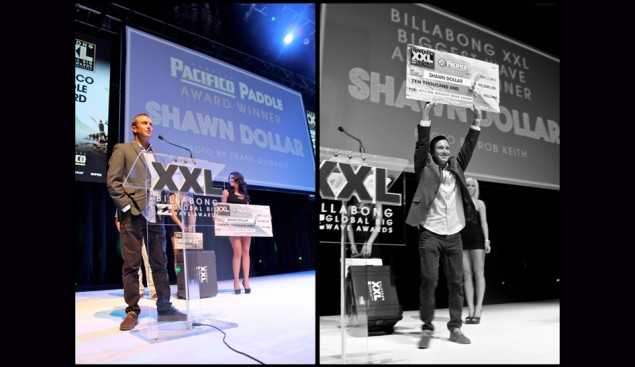 Earlier this year, I attended the Billabong XXL Awards in LA. One guy and his words stuck with me more than anything after that event. Shawn Dollar won both the Biggest Wave and Pacifico Paddle awards for his record breaking 61-foot wave at Cortes Bank. My personal favorite part was watching Ken Collins toss cash in the air each time Dollar’s name was called; you can feel the brotherhood from across the room with the Santa Cruz boys. He netted $35,000 along with a Guinness Book World Record and then nabbed everyone’s respect when he dedicated his wave to the late Sion Milosky. Dollar, himself a dedicated family man, was there when Milosky passed at Maverick’s, and he says it’s changed him.

Needless to say, after that night, Shawn Dollar had my interest piqued and when I noticed he was in my hometown, I knew I had to speak with the man. Who wouldn’t want to take a peek inside the head of a living legend?

How did you start big wave surfing? Was it a natural progression or something you’ve always wanted to do?

It was a natural progression. I’ve just always paddled out when it’s been big. Even when I was a grom.

What inspires you to continue to surf big waves?

The challenge inspires me the most. It’s the most difficult thing I’ve ever done mentally and physically. The rush is amazing too.

Who are the guys you looked up to when you were young?

Richard Schmidt, Flea, Peter Mel, Skindog, Zach Wormhoudt, Jay and so many other from SC (Santa Cruz, CA). There were a lot of guys heading up there and charging. It was cool seeing them day to day and knowing what they were doing.

What outside of surfing inspires you to push your limits?

I’m not very happy with mediocre results. I guess everything I do is pretty full on. I’m also not interested in too many other things so between sales, family and working out, I try give those things my all.

Do you have a limit?

I do have a limit. I just haven’t found it yet. I don’t know what that is, but I think my limit will come from being satisfied with what I’ve done. I’m very satisfied with the rides I’ve had and where I’m at.

What is your favorite place to surf (big or small)?

I truly love surfing Pleasure Point when it’s good. I love being close to home and getting really good waves with my friends.

How do you feel about the state of safety in the big wave surfing community as of late? Are technologies such as inflatable wetsuits and underwater breathing devices going too far or is it something you embrace?

I use the technology. It’s saved my life. I truly believe we are surfing waves right now that have a very high risk of death without the back up of safety equipment. I’m not saying you’re going to die when you fall. But if you fall on a 50-60 foot wave ten times with no safety equipment, you might be okay nine times. In my experience, one of those is not going to go well and you will need something to sustain you or get you out. Humans are physically at their limit in the waves we are surfing right now. Technology is allowing us to come in safely on a regular basis.

With the paddle in movement being pushed so far lately, do you think there is ever going to be a place for tow-in surfing in the future?

Yes I’m sure there is going to be a time again. I think guys will want to do big wraps again and put themselves in those positions you can’t while paddling. But having Maverick’s being off limits to towing, that really keeps paddling always relevant.

Who do you think is really pushing the limits of the sport? Who are some up-and-comers or underground guys we should know about?

There are so many so I’m going to miss a lot, but right now I think you’re going to see more of Nic Lamb, Colin Dwyer and Travis Payne. Especially now that they are getting in to the Mav’s event. Jaws is putting out some crazy talent with Albee (Layer), Matt Meola and so many others with them. The thing about paddling is any day someone can surprise you. A wave can come to them and they can go and just blow up. It’s a tough thing to always be the guy killing it each session. The ocean picks who it wants.

What were you thinking when you paddled for your record-breaking wave at Cortes?

I wasn’t thinking. It was all impulse. I went from, “I’m fucked” and going to take this thing on the head to whipping it and doing a hail mary. All impulse.