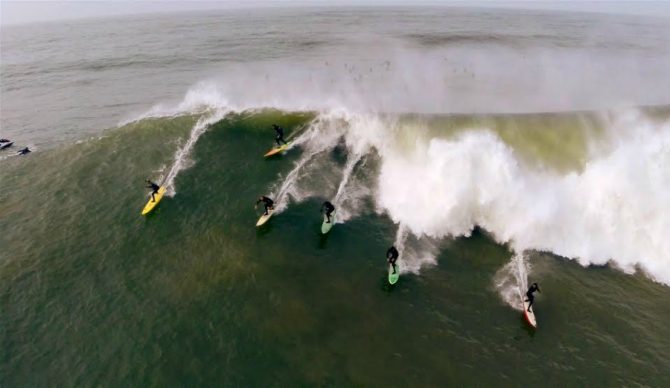 After winning four audience-choice awards in film festivals, “It Ain’t Pretty,” the first feature-length documentary on women’s big wave surfing, will be available to the public. For the past six months, the film has been shown around the world but only to audiences of film festivals and private screenings. The movie hits iTunes and Amazon on Feb. 7 (the price hasn’t been set yet but should be less than $10).

“It Ain’t Pretty” centers on the “Outer Bar Babes,” a group of female surfers who charge San Francisco’s Ocean Beach and some of the other heaviest waves on earth including Mavericks and Jaws. The film’s name has a few layers of meaning. The most obvious is that these surfers, with their thick hooded wetsuits and sometimes ugly wipeouts, don’t fit the bikini-clad, tropical image so often found in the surf media.

Filmmaker Dayla Soul says she doesn’t have a problem with that image, but she wants to show another side of women’s surfing. “We want to see hard ass-women out there in 30-foot waves,” Soul says.

“We need to break down this whole idea of sexualizing everything, I’m not being sexual when I’m out surfing. I’m just getting rad,” says Rebecca Sandidge, an Ocean Beach surfer, who appears in the film.

The name is equally fitting to the ongoing drama between the Titans of Mavericks contest and those who for years have asked for a women’s division. Last fall, the organizers finally acquiesced and laid the ground to add a women’s heat to the comp starting in the 2017-2018 winter.

“There’s been a little resistance, but it’s time now,” she says. “A couple of years ago there weren’t enough women who could fill contests, but now there are, and they’re at that level where they’re ready to perform on the big stage.”

Alongside Bianca Valenti, an Ocean Beach and Mavericks regular on whom the movie largely focuses, are other elite big wave riders including Andrea Moller, Keala Kennelly, Paige Alms, Emi Erickson, Sarah Gerhardt, Jamilah Starr and others.

Soul had the good fortune to document Bianca Valenti when she won the 2014 women’s big wave contest at Nelscott Reef. That moment became a turning point for Valenti, one that led her to become a loud voice in the quest to make big wave surfing more inclusive to women, a journey the film documents in depth. “That’s where the motivation came for doing more contests,” Valenti says. “That’s when we started asking for a heat at Mavercicks, and that’s when I started organizing around that and envisioning what we wanted.” 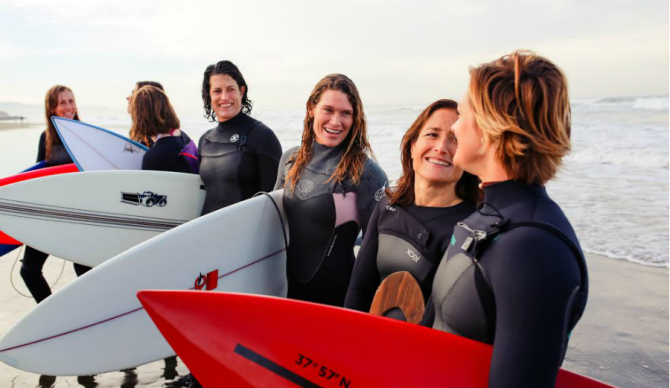 Some of the world’s best female surfers, showing a side of the sport the film’s director says is often overlooked by the surf media. Photo: Candy Factory and IAPFilms

The documentary is the first from Soul, a Kauai native living in San Francisco who is a contractor by trade. Soul doesn’t consider herself a big wave surfer,  but when Ocean Beach is pulling in 6-foot long period swell, she’s out there, she says. “I didn’t have some agenda about sexism in the industry, it just evolved, because I think that’s a big topic right now. That’s what the women ended up discussing” says Soul.

The project began four years ago. Having filmed surfing before, Soul knew she wanted high quality cameras and lenses as well as talented filmers and editors, so she launched a Kickstarter campaign that eventually netted $36,000.

“I knew to hire all the best people, that’s what makes the film,” she says. Soul brought on board documentary filmmaker Sachi Cunningham, shelled out for drone shots, and hired an editor.

Though other documentaries have examined the lives of individual female big wave surfers, “It Ain’t Pretty” takes a broader view of the sport, looks at the portrayal of women in surf media and the Mavericks controversy. The movie’s tag line is “The Women’s Big Wave Movement.”

Among the best receptions the film has recieved so far, it won an audience choice award at his year’s Santa Cruz Surf Film Festival.