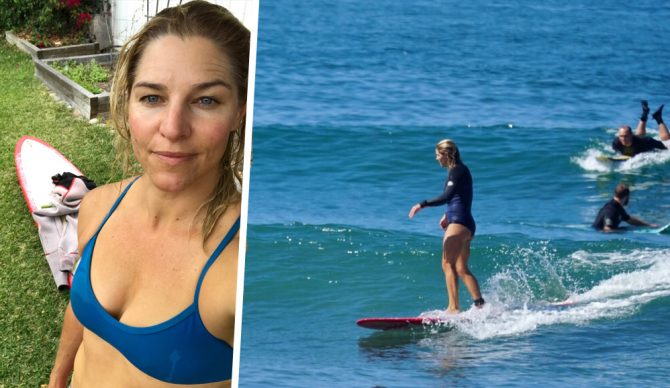 “I thought people would have opinions about what I looked like surfing in a bikini, but everyone was more worried about my warmth.” Photos: (L) Hilary Achauer (R) Dawn Patrol Media

In the ten years I’ve surfed – three before kids, seven after – I’ve avoided paddling out in my bikini.

I have a wetsuit or a rash guard for every occasion. When the water hits 70 degrees I zip up my sleeveless, legless spring suit that looks like a neoprene leotard. I tell everyone it’s to keep my bathing suit on.

I’ve got multiple pairs of performance-focused Jolyn bathing suits, which leave no chance of an underwater wardrobe malfunction. The truth is I wear rash guards and a variety of spring suits to camouflage my 44-year-old stomach.

I eat well and exercise like crazy, but I’ve always had a belly. Matters didn’t improve after two pregnancies. When I sit down, the extra skin settles and forms a roll. The idea of sitting on my longboard and worrying about my belly instead of focusing on the waves was enough to make me cover up.

Articles like “The 21 Hottest Girls in Surfing” from Men’s Fitness filed under “Hot Girls” didn’t help. I don’t look like them, or any of the female longboarders I see in magazines and ads. I internalized the message that only women with flat stomachs surf in bikinis. I have no problem wearing a bikini at the beach, but surfing in one I felt like I’d be more on display. Less in control.

Then last summer my family drove five hours past the San Diego-Mexico border to Cuatro Casas, a surf hostel at the end of an eight-mile dirt road. Perched on a cliff overlooking a point break and run by an expat named Richard, there’s nothing to do there except surf and watch other people surf.

There was some incredible surfing to watch, but my favorites were two young women who emerged most nights around 6 pm from a jumble of run-down houses and trailers separated from the hostel by a chain-link fence. They paddled out on their longboards and spent an hour playing in the waves. They were graceful, fluid surfers, but what was unusual was how they approached each wave with a sense of play – a willingness to try new things. A cheerful approach to failure. It was as if dolphins took human form for an hour, just for fun.

The two women also wore tiny bikinis. Neither had a perfectly flat stomach or beautifully toned legs. They sat on their boards and talked and laughed and surfed with perfect, breathtaking confidence, and every night I watched from the bluff with envy and wonder.

When a heat wave hit San Diego this summer, and schools closed early because of excessive heat and humidity, I decided it was time to get over myself.

I drove to my favorite surf spot, alone. I wanted to be anonymous, to have the experience without any conversation about what I was wearing.

What I didn’t realize when I put my surfboard under my arm and walked down the steps to the beach, was that the water temperature had dropped from 70 degrees to about 66 degrees since the last time I’d surfed, a week ago. Once I paddled out through the small waves I looked around and saw I was the only person not wearing some kind of wetsuit.

I sat on my board with dry hair, forcing myself not to look down at my stomach. I took a few deep breaths and watched the horizon until a fun little two-foot right came through. I paddled for it, felt that moment when the wave took over from my paddling and propelled me forward, and popped up to my feet. I didn’t think once about what my body looked like. My Jolyn bathing suit stayed put.

I started to think I’d made a big deal out of nothing.

I paddled back out to the break and got ready for another wave when a guy I didn’t recognize shouted to me, “You’re brave, just wearing a bikini. The water’s cold!”

I couldn’t really tell him why I was the only one out there in a bikini. That I had made a strange promise to myself. That I was trying to accept my body and enjoy the experience.

I got a lot of fun waves that morning. I did look down at my belly a few times. The roll was there, but so were the waves, the salt water, the sun breaking through the fog, the birds diving for fish. All of which were much more interesting than worrying about my stomach.

I finished the session and walked to my car.

“No wetsuit, huh?” a guy heading out to the water said. “Aren’t you cold?”

I thought people would have opinions about what I looked like surfing in a bikini, but everyone was more worried about my warmth. My hands were a little cold as I strapped my board to the car, but what I mostly felt was freedom. Freedom from worrying about something as dumb as what my stomach looks like when I sit on a surfboard.

I went surfing with my friends the next day, and the water was even colder, so I put on my long-sleeve legless spring suit. Not to hide my belly, but because I didn’t want to be cold.

I saw the guy from the previous day in the lineup.