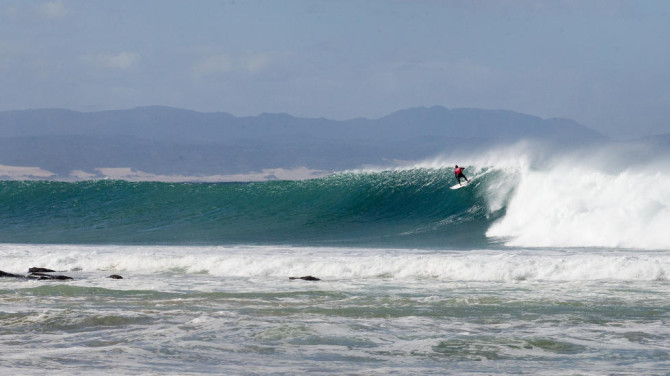 Jeffreys Bay. This is what the Dream Tour looks like. Photo: ASP/Cestari

The Samsung ASP World Tour just got a whole lot better. After falling off the Tour in 2011 due to lack of sponsorship support, the J-Bay Open has committed to a 3-year agreement and will take place right after the Fiji Pro with the waiting period extending from July 10 – 20.

“It’s only fitting that one of the world’s premiere waves provides the canvas for the world’s premiere surfers again,” Paul Speaker, ASP CEO, said. “Jeffreys Bay has an incredible heritage with the sport and the local community have been instrumental in returning the ASP Top 34 to South Africa this season. We’re very thankful and we look forward to the 2014 installment of the event.”

The only bad news is that J-Bay has replaced the Oakley Pro Bali, a brand new and fast-favorite event added to last year’s tour.

“We were very fortunate to have brought the world’s best surfers to Bali in 2013 and Keramas delivered in amazing fashion for the event,” Kieren Perrow, ASP Commissioner, said. “However, the opportunity to bring the WCT back to South Africa made sense to us and we look forward to the Top 34 showcased on J-Bay’s world-class walls this July.”

A few reactions from the ASP Top 34:

“The fact that J-Bay is back on?! Well it’s about damn time!” Jordy Smith, two-time event winner, said. “I am really excited that the event is back on. It’s by far the best stop on the tour for quality of high performance surfing. It’s arguably the best righthand point in the world and deserves a spot on the WCT. I’m proud to be a South African and to have one of the ‘CT spots be in our backyard. It means a lot to our country and the town of Jeffreys Bay. I’m sure the people are going to be really happy to see the event return.”

“Such exciting news about going back to J-Bay,” Mick Fanning, reigning three-time ASP World Champion, said. “The wave is one of my all-time favorites and the place in general is awesome. The people, the animals, the whole area is one of my favorite places on Earth. Can’t wait! “

The first stop on the 2014 ASP World Championship Tour will be the Quiksilver Pro Gold Coast from March 1 – 12. The event will be webcast live via www.aspworldtour.com and www.youtube/ASP.