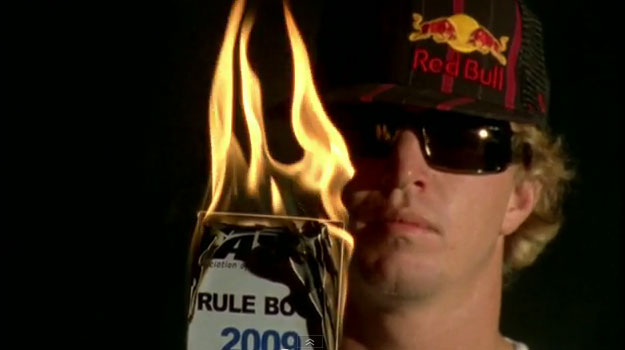 Jamie O’Brien burns ASP Rule Books, tweets harder than most dare tweet (@whoisjob), and he’s the first to admit that his life has thus far been an extended vacation. That’s what makes him interesting. That, and the fact that he surfs barrels better than almost anyone else in the world. Tetsuhiko Endo, The Inertia’s Surf Editor, called him up a little while ago to talk about Twitter feuds with Kelly Slater, the right reasons to surf Pipe, and how he deftly manages to pull off the unthinkable: being a career freesurfer. If he didn’t have much to say in response to a certain question, he wouldn’t rephrase or fall back on stock answers that athletes in his position often favor; he would simply speak his short piece, then stop. When asked questions he found intriguing, he would muse out his answers, sometimes saying things that even seemed to surprise him. He only dodged one question: “What is it like growing up as a white kid on the North Shore?”  But we weren’t expecting him to field that one anyway.

So how much time do you spend traveling?

If you could live anywhere, where would it be?

Australia, maybe. I don’t think I could live anywhere but Hawaii. It’s got the perfect town and country mix. You’ve got the craziness, all the tourists, all the people. It’s a place where you can just… I don’t know. I mean, it’s not the most beautiful island where I live; I’m just attached to Pipeline. It is a great, insane wave and I get a fair share of waves.

Talk to me about surfing Pipeline.

As I’m paddling out, I’m envisioning what I’m going to do – positive thinking, visualizing it. It’s weird, because it works. You can think about things, and then they’ll happen… not all the time. But sometimes it happens. I think the people who surf it really well have a connection with it. They can adapt to everything that’s going on around them. The other important thing is to paddle out with a good mindset and have the right reasons.

What are the right reasons?

The right reasons are being there because you have a passion. It’s also nice to have a good attitude. It’s always nice to see people who are happy even in big crowds. If you aren’t a local, it’s like, “Who are you to say what’s crowded? You don’t even live here.”

What is the wrong way to paddle out?

The wrong way would be saying: “I’m just going to go for any wave and sit deeper than anyone.” Being loud. Paddling around locals. It’s how pretty much 95 percent of the boogie boarders from Australia act. “I’ll just go anyway.”

Will you burn any boogie boarder?

No, there are guys that I know and like, but there are a lot of guys that I don’t know. They are actually learning, though. But they’re like dogs. It takes years for them to learn (laughs). I don’t want to generalize, but whatever. After a good fifteen years, a lot of them are getting pretty knowledgeable.

When did you start feeling really comfortable at Pipe?

I don’t know if I’m completely comfortable. Every sick wipeout you take at Pipe is scary. I was practicing riding switchfoot on the end bowl and was falling so hard that I was seeing lights every time.

How many bad wipeouts do you take every year like that?

(Laughing) Fuck if I know.

Who are some non-locals that you think surf Pipe really well?

Anthony Walsh. Nate Fletcher as well. He’s not from here and he is super highly respected. Probably been catching waves since before I was born.

I don’t dislike anyone in particular, but the people I dislike out there are the people who are going to make me get hurt. I can’t stand people that sit on the inside and get in your way when you get a good wave.

Can you talk about how you decided to become a free surfer?

When I decided to go down this route, I was traveling around the world doing the WQS, and I started writing this big letter to the ASP about how bad contests are and how bad whole thing is. There was a lot of anger in it. I was young, I had been pushed into it [competing] at a young age, and I was also really spoiled because I grew up at Pipeline. A friend pulled me aside and told me not to send the letter, but I was telling my dad I don’t want to do it. My dad wanted me to be world champion, but he got behind me. So with the help of my dad and an old management company, I approached my sponsors at the time and told them what I wanted to do, and you know, some weren’t backing me. Some were, but some weren’t. That’s when I signed with Rusty, and they’ve supported me ever since.