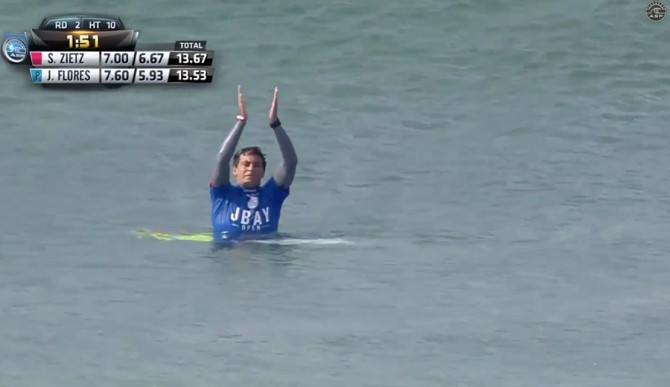 This was not genuine. Screenshot: ASP

Jeremy Flores is having a rough week. After being eliminated in Round 2, the Frenchman lashed out at the judging panel (video below) and generated some serious headlines in the process. And it only got worse: today, the ASP suspended him following a thorough investigation of the matter by the Rules and Disciplinary Committee. As a result of the suspension, he will not be appearing until the Hurley Pro at Trestles from September 9 through 20, slated to miss both the Vans U.S. Open and Billabong Pro Tahiti. Additionally, the governing body tacked on a $6,000 fine.

During his heat against Sebastian Zietz, the Hawaiian took a slight lead with only a couple minutes to go. Flores, in an obvious display of sarcasm, applauded the scoring. He had an opportunity to once again overtake Seabass, but a barrel closed out on him in the waning moments and he missed the 6.07 he needed. This apparently pissed him off.

In a passionate display of disagreement, he threw his board down and publicly accosted the judges. It is at the 32:30 mark that Flores’s reaction begins.

This wasn’t the first time Flores has been involved in a physical alteration at a tour stop. In 2011, he and Sunny Garcia engaged a local when attempting to protect Garcia’s then 16-year-old son.

Since the flare up, Flores has apologized in writing as well as in-person to the ASP officials involved.