Jetty Is Turning Recycled Plastic and Oyster Shells Into Clothing 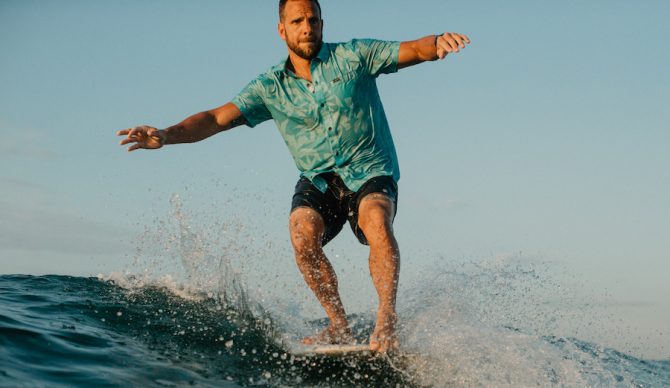 Jetty has been keeping the stoke alive and well on the East Coast. Photo: Jetty

Editor’s Note: This feature was done in partnership with Jetty

Surf Culture in the U.S. is often skewed towards the West Coast and Hawaii. California is of course the center of the surf industry. And Hawaii is the birthplace and unofficial home of high-performance. Well, what about the East Coast? It’s arguably kicked out more champions (see Kelly Slater, Lisa Anderson, Caroline Marks). It’s often wave-starved, but has moments of storm-induced glory all the way up and down the Eastern Seaboard. So as understated as it may be, surf culture is alive and well on the other side of the continent, especially as it exists under the guidance of brands like Jetty, the most recognizable Surf and Outdoors brand on the East Coast.

No line to follow? Draw your own. That’s the Jetty motto. It’s something they’ve been doing since 2003 when five friends from New Jersey came together with $200 apiece and a dream to pursue their shared love of surf, art, music, travel, and the outdoors. Privately owned and operated, original founders Cory and Jeremy are still grinding 19 years later with a commitment to sustainability and investment in local communities.

Jetty Ink, the eco-friendly screen printing facilities at Jetty HQ in New Jersey has been doing much more than printing “just another shirt” that will end up stuffed in a drawer. There, they focus on producing high-quality garments that will end up in a customer’s daily rotation. And these eco-friendly printed garments are not only sold under the Jetty label, but Jetty Ink also works with anyone from friends looking for 12 or more t-shirts to well-known brands such as Red Bull and the St. Louis Cardinals where they are an invaluable part of the process from design to printing and shipping.

Another way that Jetty has been showing its commitment to sustainability is its revolutionary use of oyster shells and recycled plastic to make Oystex – the highly-functional fabric Jetty uses to construct premium pieces in its apparel line. Oyster shells, you might be wondering, really? Yes. For years Jetty has been engaged in oyster shell recycling and reef building efforts, partnering with restaurants, towns, and scientists to collect discarded oyster shells and use them to kickstart oyster reef growth in local waters. And now the brand has found another use for the shells as well.

“Oystex really brings things full circle,” says Creative Director John Clifford. “By combining recycled plastics with powdered oyster shells we created a durable, sustainable yarn with some really unique features and properties.” Oystex is naturally quick-drying, breathable, and has anti-odor and anti-static properties. All while being sustainable, soft, and durable.

And those are not the only way Jetty has been giving back. Through its Jetty Rock Foundation, the brand has given over $1.5 million back to communities since 2013. That’s when Jetty Rock was formed as a response to Hurricane Sandy to organize and spearhead Jetty’s massive relief efforts. Still a small brand at the time, the overwhelming amount of support for its “Unite and Rebuild” initiative that sold t-shirts and clothing to raise funds for those impacted by the hurricane forced Jetty to adapt quickly, scaling the small hand-printing shop into a full operation to meet demand. One-hundred percent of the profits went to Hurricane Sandy relief, and a documentary, Landfall: The Eyes of Sandy, tells the story of those relief efforts.

Since then, Jetty’s community support efforts have branched out into multiple categories, such as the Jetty Future Leaders program which teaches students entrepreneurial skills, and the environmental efforts with oyster shell recycling, as well as the upcoming “Highwater Healing” initiative, a line of clothing which will allow a customer to choose a vetted nonprofit to support with each purchase. That nonprofit will receive 100 percent of profits from each purchase.

To learn more, visit the Jetty website, give them a follow on Instagram, and be sure to check out the Spring/Summer ’21 line, largely featuring Oystex products.